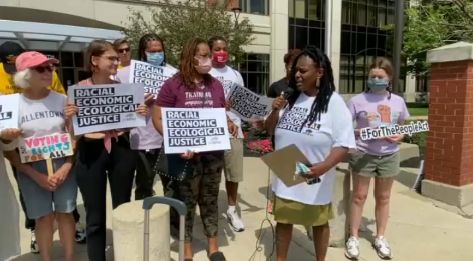 Their message was clear.

"Get the 'For The People's Act' not only moved in your part of Congress, but ensure that it becomes law without messing with anything. Without changing anything," Peace Action New York State President Jim Anderson said.

The rally was part of the nationwide "Deadline for Democracy" campaign happening over the next few days with Congress in recess. Progressive groups mobilized after Senate Republicans blocked the broad reform of federal election laws.

"I believe this is one of the most fundamental fights and critical fights that we could possibly be endeavoring," Open Buffalo Executive Director Franchelle Parker said.

Among the many reforms the legislation would require include nationwide expansion of early voting, same-day and auto-registration and expand access to absentee and mail-in voting. The bill would in some ways counteract legislation that other states have passed that have made voting more restrictive.

"We can't look at this as 'oh this is a problem that's happening in Texas or New York state.' We know that if they're coming for one of them, they're going to come for one of us and we need to stand in solidarity to make sure we're protecting any piece of legislation that's going to happen across the nation," Parker said.

On top of the rally, the group also organized a postcard campaign. They hand delivered messages from the community to Schumer's office.

The majority leader wasn't there.

In a statement, Schumer said, "state legislatures across the country are passing draconian restriction on the right to vote that hark back to Jim Crow."

He said every single Democratic senator united to fight back last week and he will continue to put forward votes on the "For The People Act" and push very hard for its passage.