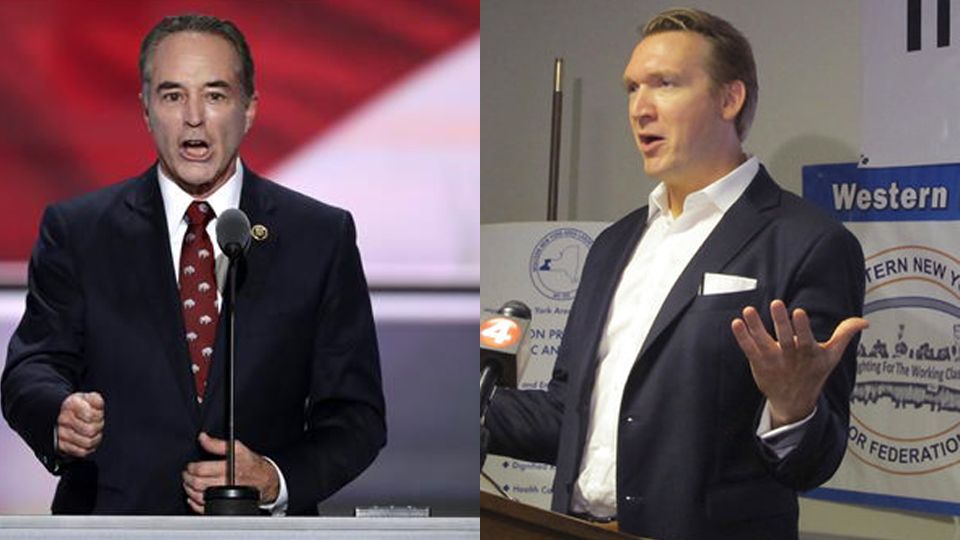 Democrat Nate McMurray has the attention of national Democrats one day after a Spectrum News/Siena College Research Institute poll showed him within striking distance of incumbent Rep. Chris Collins (R).

.@Nate_McMurray confirms the @dccc has added him to the "Red to Blue" list (priority races). "I think they're recognizing all the hard work we've been doing and we're going to continue to campaign the right way like we've always done."

The numbers out of New York's 27th Congressional District show a statistical dead heat. When asked who they'd vote for, three weeks out from Election Day, respondents went with Collins, with 46 percent, compared to McMurray with 43 percent.

Erie County Democrats hailed the results and said the "Red to Blue" list indicates the Democratic Congressional Campaign Committee will pour financial and ground support into the race leading up to Election Day.

Democrat @Nate_McMurray says he’s not concerned at all about a Bannon visit to the district. https://t.co/qa4LD42gCB

"This is a strongly Republican district that is struggling to determine how it's going to vote in this congressional race," said Steve Greenberg with the Siena College Research Institute.

Meanwhile, @Nate_McMurray buoyed by poll numbers but he too says he's not surprised — that the numbers verify what he's been saying: #NY27 is proud and people here "do not want to vote for the most corrupt person in Washington" and are getting behind him.https://t.co/tWHEJThOlg pic.twitter.com/WeyWsQOtze

"I think it's recognition of the fundraising we've done," McMurray said. "We've done that through small dollar amounts, $70 is the average donation, so it's a combination of fundraising and, plus, the polling."

UB Political Science professor Jacob Neiheisel said this recognition from the national party could be a game-changer for the McMurray campaign.

"With al lthe things that have been thrown at this situation and the non-stop media coverage, you would think that Nate would be ahead quite a bit by now, and I think in a more tight swing district that would be the case," he said. "This is not a tight swing district, this is a deep red conservative Republican seat."

Siena College Research Institute in partnership with Spectrum News polled 490 people between October 6 and October 11. What it found was a race that is basically a toss-up with Collins' advantage falling well within the 4.7 percent margin of error.

"That's not terrible if it was the whole electorate, but when that's your party, that's not really good and that may explain why, right now, nearly a quarter of Republicans say they are supporting Nate McMurray for Congress rather than their standard bearer Chris Collins,” Greenberg said.

In August, Collins suspended his re-election campaign after he was indicted on federal charges of insider trading. Weeks later, Collins decided to remain on the ballot, then took up actively campaigning with a promise to serve if re-elected. Most recently, a judge scheduled Collins’ trial for 2020.

Greenberg says the district remains the most Republican-leaning in New York when it comes to enrollment, and by an 18-point margin, both want a GOP-controlled Congress and approve of the job President Donald Trump is doing.

Still, Greenberg says McMurray remains an underdog in the race and needs to not just bring more Republicans and independents to his side, but also do better with his own party.

Among Republicans, 63 percent said they'd vote for Collins, while among Democrats, McMurray appears to have much more support, with 73 percent. Among independents, McMurray posts a 46 to 45 percent edge.

Collins has been in Congress since his election win in 2012. McMurray has served as town supervisor on Grand Island.