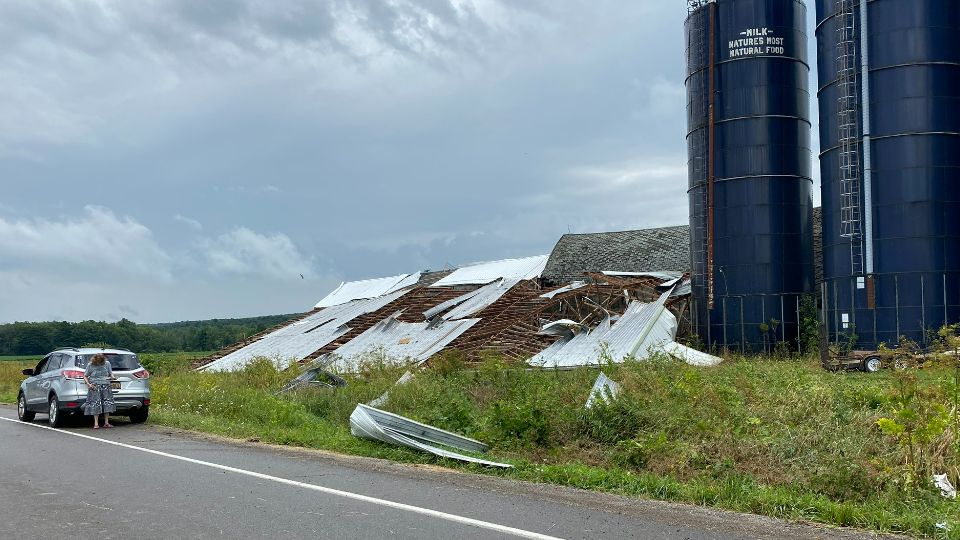 ​JAVA, N.Y. — ​According to a preliminary storm survey from the National Weather Service, an EF-2 tornado touched down in Wyoming County late Thursday morning.

The tornado caused several trees to go fall on Route 78, and even brought down a barn in the town of Java. The owner, Sam Marlett, says she still hasn’t processed what happened.

Marlett said it all began when she saw a white wall of rain come through the potato fields behind her house.

“Wind. Rain. Debris,” said Marlett. “I saw branches flying and that was it. I blinked and it was gone. And then I came outside and everything was gone.

Mike Fries, a warning coordination meteorologist, says an EF-2 tornado in this area isn’t unheard of, but it is less frequent.

“The majority of them that you would have in most areas would be an EF-0 or 1,” he said.

Marlett says she had one horse and about 10 cows in the barn at the time it was struck by the tornado. Luckily none of them were hurt, nor were any people injured.

“The house hasn’t even been touched,” said Marlett. “Some shingles are missing. The siding is missing. But the house, nothing has been broken, not even the windows.”

The weather brought power lines and trees along Route 78 down. For Marlett’s property, her barn took the brunt of the damage. Fries estimates the barn moved about 25 feet, and says the back of the barn collapsed completely.

“I think one of the most amazing things of this whole story today is the story of the barn behind us, where not only were none of the people in the home behind us hurt or killed, but none of the livestock was either,” he said. “You can just witness the damage that was done to that barn and it was sort of a miracle.”

Marlett says she and her family moved into the property a year ago. She says it was her dream house.

“This house I had been looking at to buy for years. I had been. You know, more work just needs to be down that’s it,” she said. “We’ll make it work. We’ll fix it.”

Marlett says she’s just glad no one was hurt.