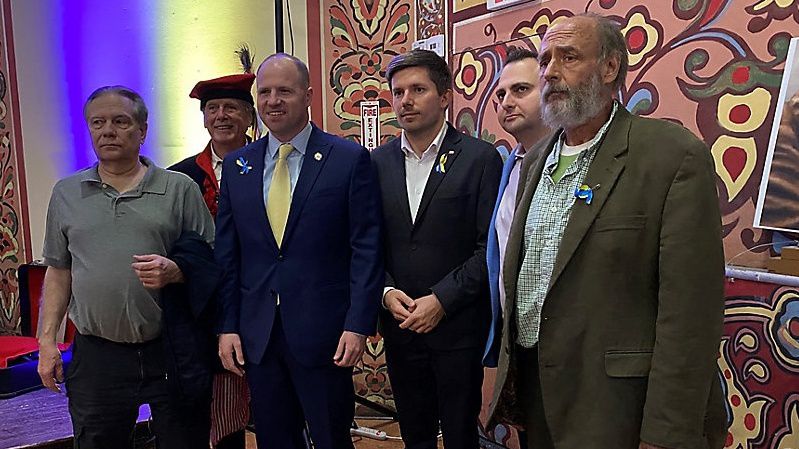 When Russian aggression began in Crimea in 2014, Poland quickly became one of Ukraines first and greatest allies. That alliance has grown stronger than ever amid the Russian attacks of 2022, and even in the United States, these two communities stand united.


The Dnipro Ukrainian Cultural Center brought Buffalo’s robust Ukrainian and Polish communities together Saturday for a night of solidarity, both to raise funds to aid in humanitarian efforts in Ukraine and to celebrate the camaraderie of the two countries.

“My relatives, that some of which are now in Poland, and have received the generosity of the Polish people are really grateful," said Bohdan Cherniawski, Dnipro Ukrainian Cultural Center community liaison. "I speak to them everyday, I’m always worried sick about their safety and I’m very grateful that Poland has really stepped up.”

The event featured a silent auction with prizes like a football signed by Buffalo Bills Quarterback Josh Allen. Guests were also briefed on the latest happening locally and abroad, from a donation of masks made by Erie County to Ukraine earlier in the day, to over two-million Ukrainian refugees taking shelter in Poland.

“One household has already hosted eleven people from Ukraine; they didn’t even know who they are," said Joseph Mikolaj Rej Jr., The General Pulaski Association, Inc. President, who received updates from his family in Poland. "They went to the border, people needed help, and they kind of picked them and some of the people are still staying with them for a couple of weeks now.”

Poland’s Consulate General Adrian Kubicki even paid a visit, expressing the importance of unity amid the crisis unfolding each day. He says what makes Poland a great ally of Ukraine is the country’s own battle for freedom against Russia.

“Solidarity, by the way, is something that Poland stands for," Kubicki said. "Thanks to solidarity, we defeated Russian communism that was in Poland and in other countries and finally, Poland became a democracy. We believe that this is the future that is available to Ukrainian people as well.”