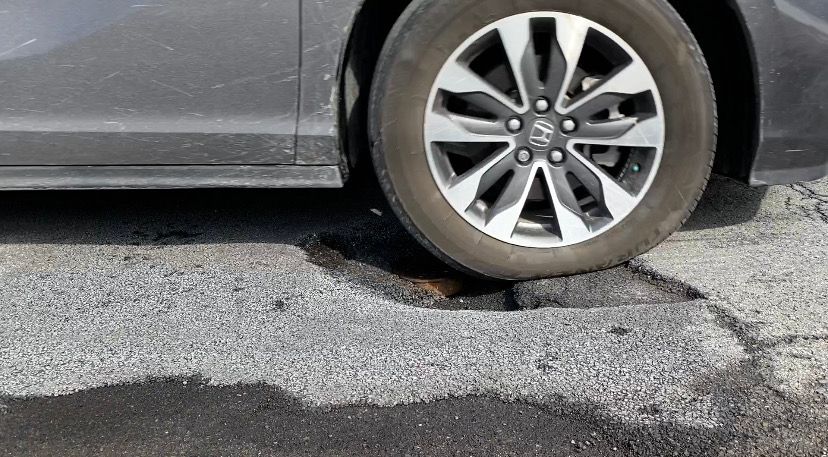 BUFFALO N.Y. — It's safe to say spring is synonymous with potholes. According to AAA, last year alone, 28 million Americans had pothole damage bad enough to get repairs. The average price tag was $581 per repair. So, damage caused by potholes last year cost drivers $26.5 billion.

How are these potentially dangerous and annoying sometimes road craters formed? And why is it always spring that potholes rear their costly heads?

“This is one of the options we have to keep track of complaints,” said Mike Pasnik, senior highway maintenance engineer of the Erie County Department of Public Works Harlem District.

Pasnik and the Harlem District crew take advantage of a dry, warm spring day to fill the latest round of potholes in the 200-plus lane miles they’re in charge of. Their day starts at the barn off of Harlem Road

“It’s just a necessary evil of what we have to do,” Pasnik said.

Cold patching potholes, that is.

Pasnik says hot asphalt isn’t available until after April 15. That’s when the plants open for the season.

Until then, it’s shovels full of a rock-oil mixture to make your drive as smooth as possible. The Harlem District has gone through 25 tons so far this year.

While it’s job security for the team, who hasn’t had a holiday or weekend off since Thanksgiving mind you, to be blunt, potholes are just aggravating. So what causes them? And why do they appear each spring?

Orr has those answers and more from this pothole in the village of Hamburg’s public parking lot. And, as you can imagine, the science to the formation of potholes, isn’t exactly just surface level.

“Excess water could be beneath the pavement due to high water table, or due to a dirty material,” Orr explained.

That dirty material can affect the road’s bonding process. So, water can seep in, and cars come along it as Orr describes "pops the surface."

“It could also be the material has too many finds, as we call it,” Orr explains. “Small particles that hold onto water, and now they are soft because there is access water and it is stuck there.”

Some roads are worse than others depending on how much traffic, and what kind of traffic.

Orr says roads are meant to deflect with heavier loads. But, like a paper clip, it bends and eventually cracks.

“Those cracks let water in, and that makes the problem even worse,” Orr.

The end result, you guessed it, a pothole.

Orr adds it’s all about the base. He says Glacial till, which is the most common subgrade (or native) material under our roads, tends to be too dirty and varies quite a bit from place to place. It can be soft in places as well.

Back on the road with Pansik, they are always on the go.

“Our crews are on call 24/7 and if weather dictates, they’ll be leaving their families to make sure they keep the roads safe,” Pasnik said.

One shovel, packing, and roll, at a time.

Also of note, January thaws, while nice, can lead to an early start to a crop of potholes.

You might be saying to yourself that there has to be a better solution in the future. The short answer is, yes.

While there will never be a day we don’t have potholes, there is a newer process called warm mix. It’s heated up to a temperature between a cold patch and hot asphalt, then a chemical, or wax, is added to help it bond to the rocks below better.

Orr says it takes less energy and you can do it later in the year as well. This is creating a longer paving season. He says this is something NYSDOT crews will start using more this season.