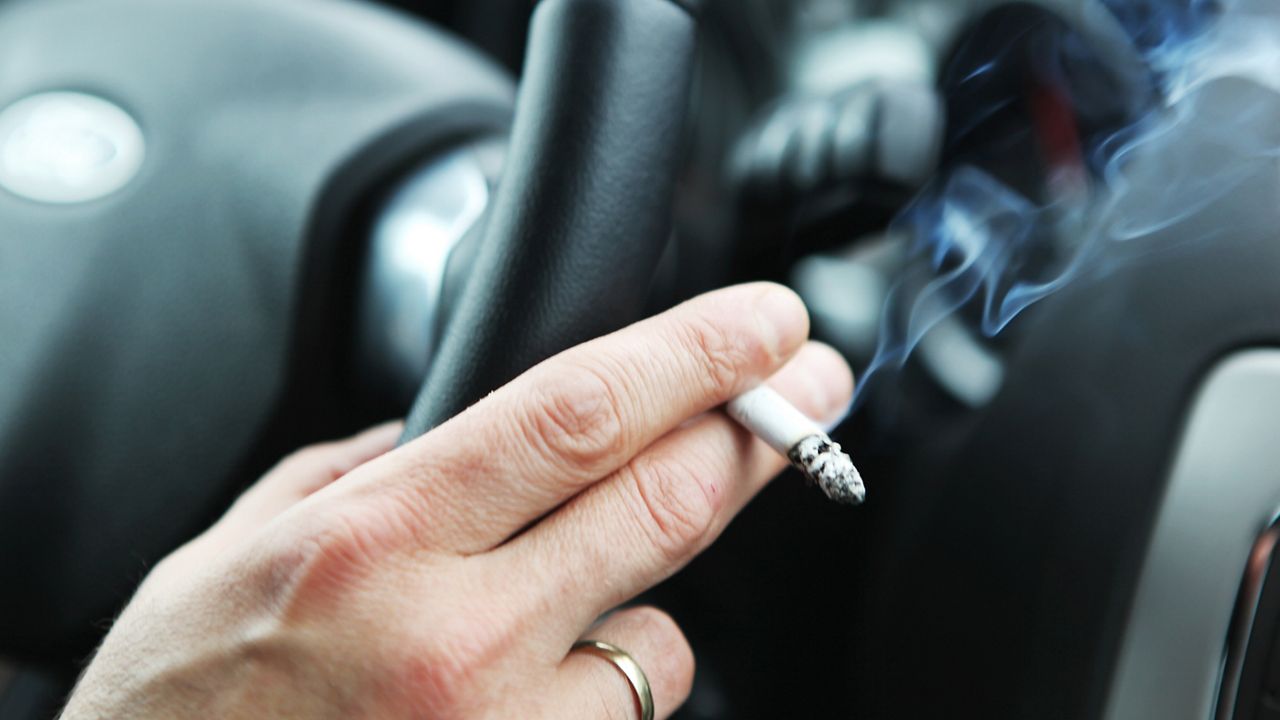 BUFFALO, N.Y. — Detrimental. That is how secondhand smoke in vehicles is described in regards children’s health.

In February, Northern Ireland made smoking in cars with children illegal. It falls in line with other regions of the United Kingdom and the Republic of Ireland, which had its ban go into effect in 2016.

The reason is simple: keeping kids safe and reducing the perception that smoking is normal behavior. But what are the short-term and long-term effects of secondhand smoke on kids? And could New York follow suit of nine other states with the ban?

“The level of exposure to toxins is just off the charts,” said Dr. Andrew Hyland, chair of the Department of Health Behavior at Roswell Park Comprehensive Cancer Center.

It’s been illegal to light up with a child in the car in Erie County since 2018 as part of the Erie County Public Health Protection Act. In addition, the act prohibits smoking in or adjacent to NFTA bus shelters and public areas near them. Hyland was instrumental in getting that legislation passed.

“People sort of get it, but not everybody gets it, so these laws kind of close the loop,” Hyland said.

Like the saying, "out of sight, out of mind," that’s exactly how particulates of secondhand smoke seem to work.

“With the windows up, and no ventilation, the levels broke the machine,” Hyland said. “They were more than 10,000 micrograms per cubic meter.”

That level is far worse than the air quality during a forest fire, Hyland said.

“The worst air quality you would get is a forest fire, and those levels are about 1,000,” Hyland added.

Hyland said there are dozens of carcinogens in cigarette smoke. It affects kids more because they breathe more.

Infants are most at risk, especially since their bodies are developing. Secondhand smoke can cause sudden infant death syndrome in the most serious cases. Hyland adds it has long-term effects, too.

“They are more likely to get ear infections, respiratory infections, making asthma attacks much worse and require hospitalizations,” Hyland said.

In fact, according to the CDC, each year secondhand smoke causes 150,000 to 300,000 cases of bronchitis and pneumonia in children younger than 18 months of age.

“These are preventable diseases, and the parents and guardians really have an obligation to take care of their children,” state Sen. Toby Ann Stavisky said. “If not, then the government will have to do it.”

Since 2009, the downstate senator has been pushing a bill to ban smoking in personal vehicles with kids under the age of 14.

“By the time they reach 14, they are less susceptible,” Stavisky said.

It would be a $100 fine if you’re caught in violation. Right now, the bill sits in the Senate Health Committee. Stavisky said over the years the hang-up has been a variety of things.

“Cigarette smoking is legal, and I think people have been reluctant to impose additional sanctions,” Stavisky said.

Stavisky plans to speak with the Senate Health Committee after the state budget is passed in April. Right now it isn’t on the committee’s agenda and still needs an Assembly sponsor.

State Sen. Patrick Gallivan is on the committee and responded to our inquiry regarding the legislation writing:

State Sen. Sean Ryan, who also sits on the health committee, was unable to comment on the proposed legislation due to being unfamiliar with it at the time of our request. State Sen. Edward Rath III was unavailable for comment.

Stavisky said she remains cautiously optimistic that this will be the year it becomes law.

“You never know, I hope so,” she said. “I hope so for all the children who sit in the backseat and cough.”

Secondhand smoke affects adults, too. Hyland said nationally each year, about 3,000 people die from lung cancer caused by secondhand smoke, accounting for about 2% of all lung cancer deaths. It also causes heart disease.

Hyland said New York has been progressive on all fronts in terms of protecting public health and shares a similar sentiment with Stavisky that the time is coming.

“I think while New York has not yet adopted this common-sense policy that you shouldn’t smoke in the car with kids, I think that day is coming soon,” Hyland said.