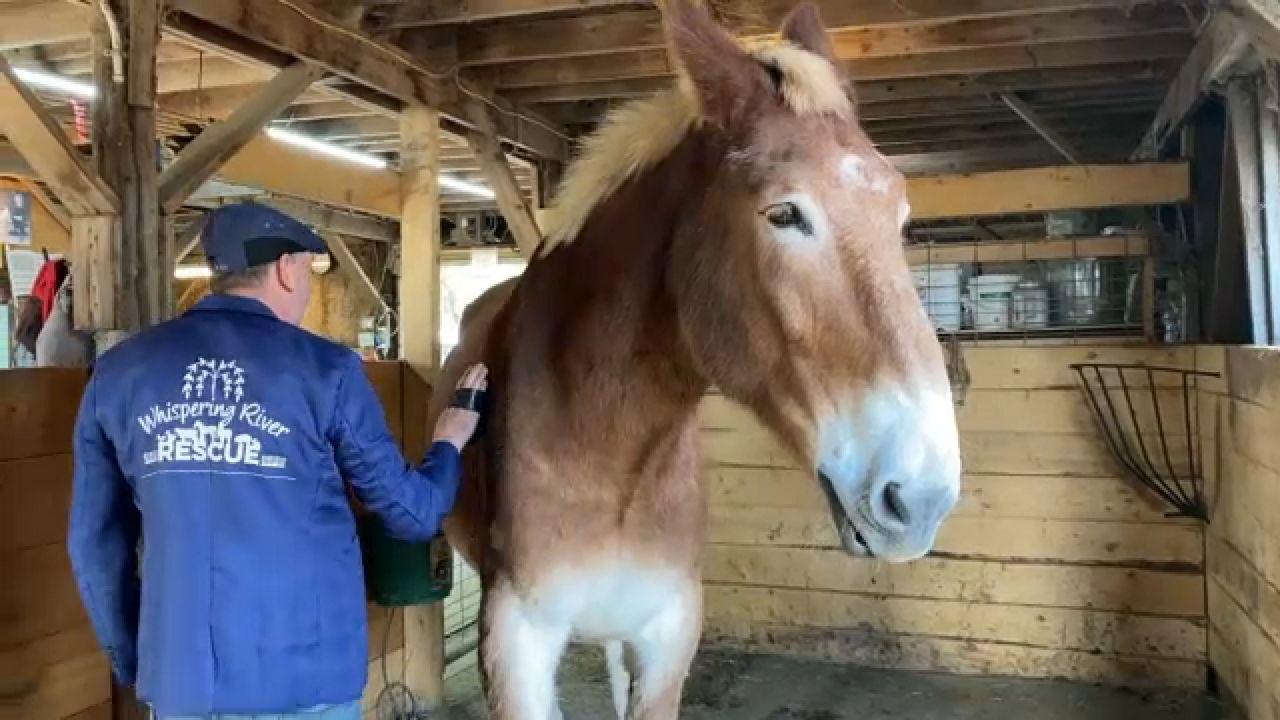 GASPORT, N.Y. — ​Most of us don't think about what happens to farm animals as they get older.

Brian Markovich gets to spend time with animals like Perseus, a 2,000 pound mule. He’s a trustee for Whispering River Animal Rescue. It’s not your typical rescue - it’s dedicated to rescuing farm animals, with a focus on donkeys.

“Our whole mission is to rescue and adopt. We adopt out the donkeys that we rescue,” Markovich said.

Perseus and other donkeys were rescued from kill pens in the south.

Whispering River Animal Rescue rescues the worst of the worst from the horrible conditions of kill pens. Laura Randolph, barn manager, is cleaning Phoenix’s hooves, a feat that didn’t seem possible when the donkey first arrived at the rescue. Phoenix couldn’t stand when she first got here and she wasn’t moving. A veterinarian was brought in to euthanize her because volunteers and staff didn’t think she could make it.

“She was in really bad shape,” Randolph said. “And it’s not a decision we make lightly. She came out, she gave her a shot of ban amine, which is a pain med. Phoenix stood up and was like ‘I don’t want to die yet.’ ”

There’s a reason donkeys are sent to kill pens - they’re considered a delicacy.

“They’re used for teas, they’re used for glues, they use their rawhides mostly in the Chinese market,” Randolph explained. “They pay a pretty penny for these guys and the different parts that they have. Millions go from slaughter pens to slaughter markets every year just to be used for these delicacies. I’ll never understand it.”

It’s exciting for Brian and other volunteers when transports of animals arrive. The rescue currently has 16 donkeys. But caring for donkeys isn’t easy nor is it cheap. The donkeys have specialized hay due to their strict diet and that’s expensive. It's one of the reasons why Brian says they’re in need of donations.

“We have a lot of projects going on and we’re always expanding. We expanded our paddock, to facilitate more donkeys and they have a lot more room to roam. And it also lets other areas regenerate,” Markovich said.

Each animal, donkey or another kind of farm animal, will stay here at Whispering Animal Rescue until they are adopted out to other farms or places that can care for them. Here they’re loved like the volunteers’ own pets.