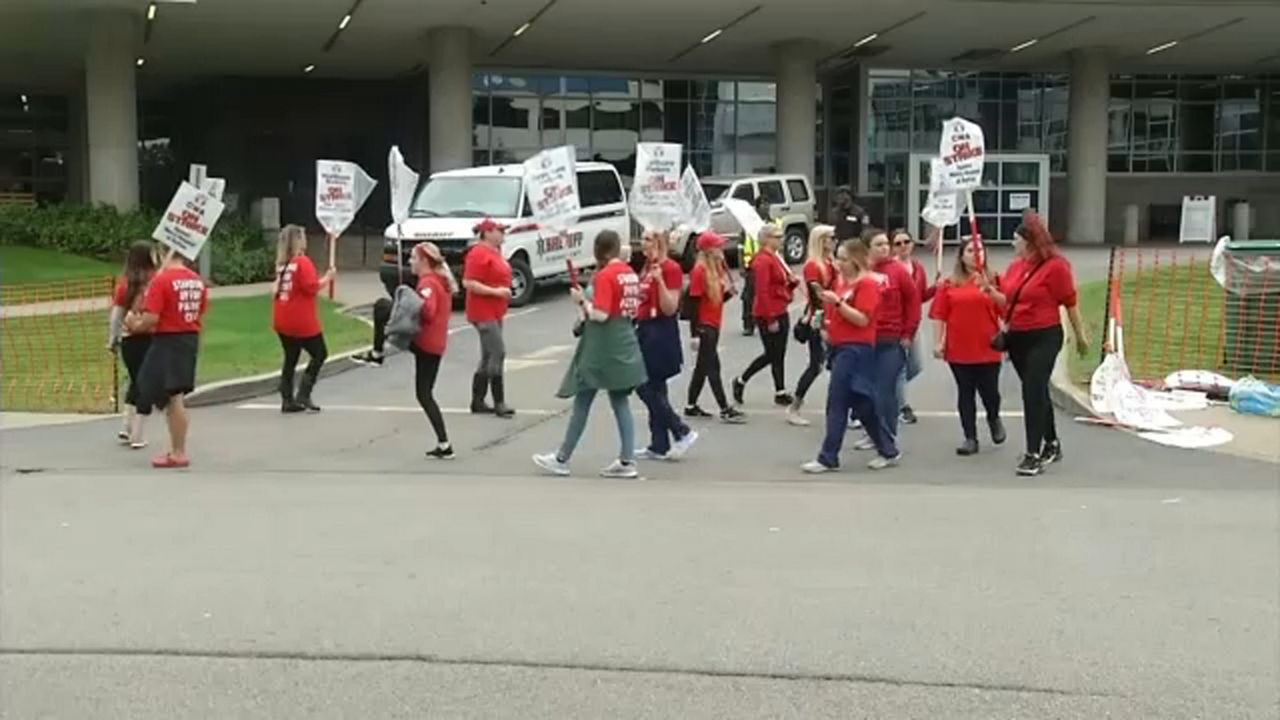 BUFFALO, N.Y. — Tuesday marked the fifth day Mercy Hospital of Buffalo employees have been on strike.

The health care workers are asking for better wages, staffing and benefits.

CWA members and Catholic Health officials met Tuesday morning in person to negotiate a new contract for the health care workers. This comes after both sides had difficulty setting up a meeting over the past few days.

CWA staff representatives say the union met on Monday to review open proposals and begin to put together a counter proposal for Catholic Health. They say they did have some questions that needed to be answered before they could do that, and Catholic Health met with the members Tuesday morning to do so, beginning of a lengthy discussion on staffing issues and staffing language they proposed.

"We feel like our economic package to Catholic Health addresses all of our concerns,” said CWA area director Debora Hayes. “It gets our low-waged workers above the $15 an hour mark and closer to what is a living wage. We were able to deal with a number of the shortfalls in the technical job titles, and we were also able to make a comprehensive proposal as it relates to the 1,200 or so nurses that we are bargaining for."

"We just want a fair contract with what is in line in the market,” Erin Spaulding, CWA staff representative. “I can tell you what Catholic Health has been paying and what their staffing levels are, and I can tell you they are not in line with what's been happening in the market. I think it is just important that both sides are at the table and that both sides keep pushing forward until we reach an agreement."

Catholic Health said both sides had a productive, in-person discussion, and that CWA still has not responded in writing to the hospitals' $33 million wage and benefit package.

“Staffing is a challenge facing all healthcare providers in Buffalo, New York and across the nation,” JoAnn Cavanaugh, Catholic Health director of public relations, said in a statement. “Some reports show that, throughout the country, nearly one in five healthcare workers have quit their jobs during the pandemic. The staffing concerns our associates have shared are not unique to Catholic Health. We share their frustration, which is why we continue to aggressively recruit staff to Catholic Health and are discussing new ideas with the union to address this ongoing issue.”

CWA says they are not sure how they will negotiate for, but say they are committed to doing so for as long as it takes.