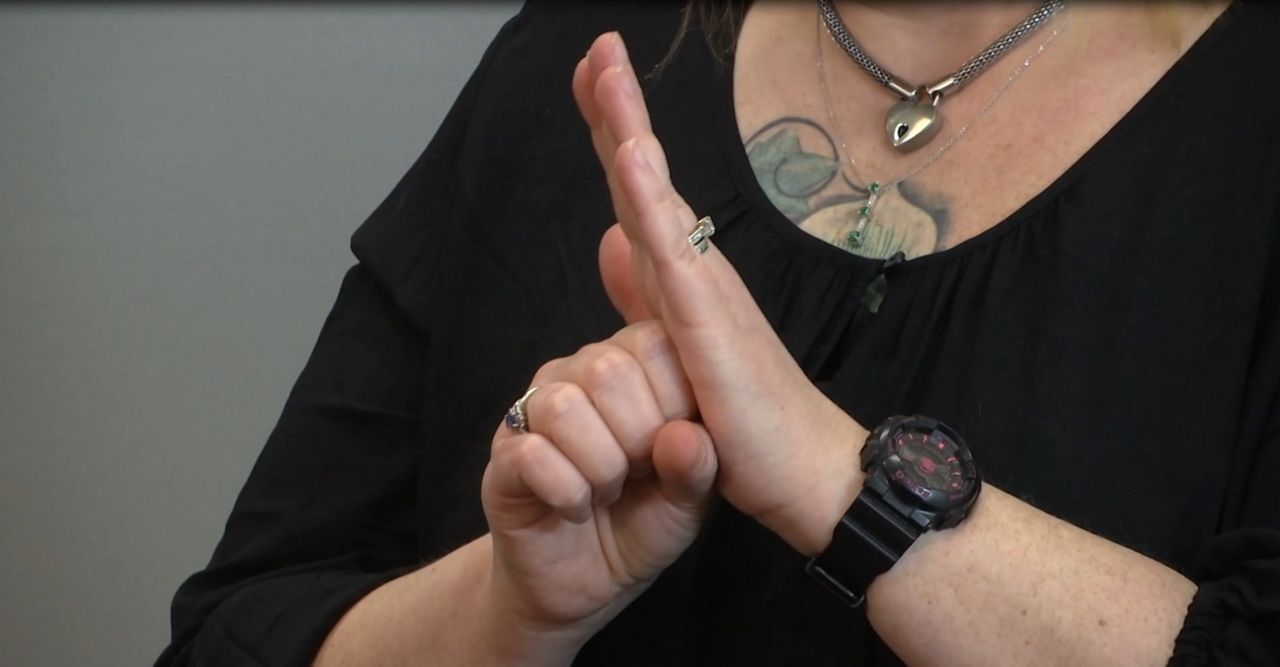 BUFFALO, N.Y. — Making sure everyone has access to critical information about the pandemic has been the hope from a number of agencies and governments across the state as they continue to host COVID-19 press briefings.

"As long as they keep having them, I'll keep coming,” said Kendra Schmidt, a Deaf Access Services staff interpreter.

If you've been tuning in to the Erie County COVID-19 press briefings in the last year, you've seen familiar faces like County Executive Mark Poloncarz and Health Commissioner Dr. Gale Burstein. But they're not the only ones we've grown accustomed to.

Throughout the pandemic, American Sign Language interpreters from Deaf Access Services like Kendra Schmidt have been hard at work interpreting the briefings for those who are deaf or hard of hearing.

"English is not a deaf person's first language, so a lot of people think that captioning and subtitles is good enough,” Schmidt said. “It's not good enough. ASL has completely different grammar. There are words in English that don't have signs. There are signs that don't have English words, so they're not equivalent. It's just better to have it in their first language as ASL so they completely understand because they deserve to understand just like everybody else does."

She's interpreted for students, the mayor's state of the city speech, and at the Erie County Fair but this assignment is among her most unique.

"In the beginning, I was super anxious,” she said. “I feel like I was going to pass out during them because there were so many people in the room and so many cameras and people watch you when you're interpreting. So I try not to look at the people out there because I'll feel super lightheaded. It's gotten better and I just try to fake it till I make it, and look really good even though I know every time I interpret for one of my deaf clients, they're like I saw you on TV and I'm like I know.”

Evy Salvato-Rood of West Seneca has seen Kendra a lot on TV since last March. She tells Spectrum News the press conferences have kept her informed and the interpreters make all the difference.

"I don't want us to be the last people to know,” Salvato-Rood said. “It's just not right. Having a live interpreter to explain everything that's going on, it's wonderful because I know what's going on and I can get in contact with other people and I can tell them hey did you hear that this was going on, did you see."

Salvato-Rood recalls a bad snowstorm one October where she felt left out because she was deaf.

"The power went out, it was three days, it was no way to communicate with anyone but the people around me could already listen through the radio,” she said. “I'm deaf, I was clueless. Firemen, the police they were providing food, I was deaf so the deaf and hard-of-hearing had no idea.”

"Really it's not just these press briefings but there are situations in which let's say Department of Social Services, Department of Senior Services, our Erie County Sheriff's Department, many of our county departments are utilizing the services of Deaf Access Services to be able to provide that equal access, equal opportunity," Cammarata said.

Salvato-Rood says it'd be nice if she can turn on the TV at any point of the day and see an interpreter signing what's on the air. Until that happens, she thinks we all can play a role in helping the deaf community.

She asked Spectrum News reporter Brandon Lewis, "Why don't you guys go to DAS and learn some sign language? Suppose you meet a deaf person, you can sign a little bit with them. That would be nice."