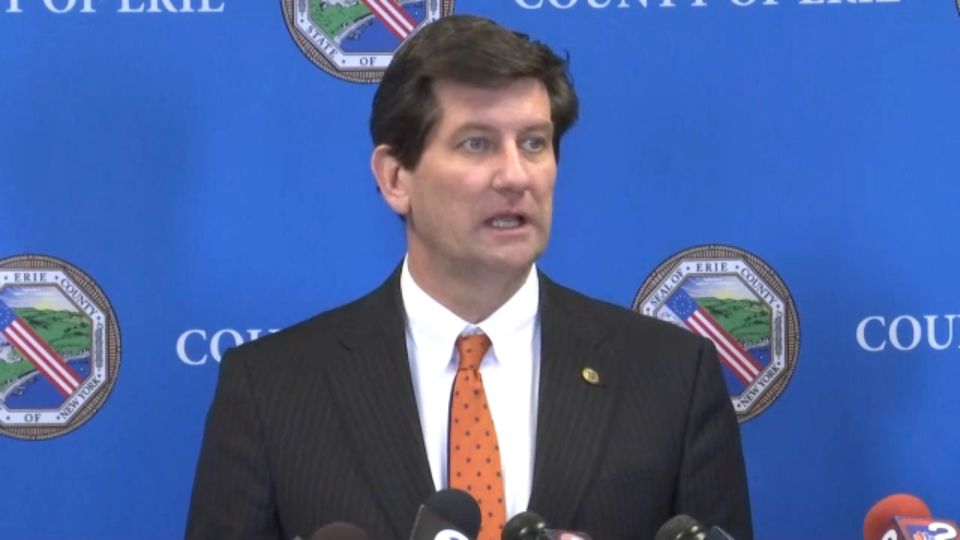 Poloncarz Responds After Picture Shows Him Maskless With Group

ERIE COUNTY, N.Y. — Erie County Executive Mark Poloncarz says he made a mistake by not wearing a mask in a photo at a golf event.

A photo released of Poloncarz and his team at the South Park Golf Club shows the county executive not wearing a mask as he is surrounded by the other men.

Poloncarz took to Twitter Sunday to respond, saying: "While I should have worn a mask nothing the team members did in that photo is contrary to our health protocols: we were outside, less than 20 people and together for the photo for about 15 seconds.

This just goes to show how we can all make a mistake and reminds me why I must carry a mask with me at all times."

Yesterday a picture was taken of me with members of a golf team I was on while not wearing a mask. I just plain forgot to wear one. It happens. My full statement on the photo. pic.twitter.com/xJfmxSNoXy

On Monday, he explained his actions saying he was participating in a team golf event and his team ultimately won.

Poloncarz said, "We were happy, we took a photo and then thought about it the next morning when I started hearing, it's like I probably should've had a mask on."

Poloncarz admits he just wasn't thinking about wearing a mask in that moment and says he was outside with less than 20 people and it took about 15 seconds to take the photo. That explanation is not good enough for some who are calling the county executive hypocritical for his actions.

Erie County Libertarian Party Chairman Duane Whitmer said, "It's your job to lead by example and not make excuses when you're caught.”

Whitmer urges the county executive to show forgiveness to businesses that were shut down because of COVID-19 protocol violations.

"We're asking him to allow those businesses to reopen, reinstate all liquor licenses that he may have suspended, and refund all fines," he said.

Poloncarz says it takes major violations for the health department to shut a business down without granting them second chances. For the most part during the pandemic, he says most violations have simply been warnings.

"I would say 97 to 98 percent of the violations we issued have always been warnings. It's like we're not going to shut you down but we found some violations of the rules," the county executive said.

Poloncarz says they don't shut down private events that have less than 50 people even if they're not wearing masks and adds his golf gathering was no different from people tailgating at their home with 20 of their family members and friends. He says gatherings like those are fine.

"It was not in a business location. It was basically friends having a beer and a pop in the park, which if you go to any park in the city of Buffalo, county of Erie, any town, any city, any village, you'll see the same thing," he said.

“I don’t want to hear Mark Poloncarz criticizing anyone not wearing a mask, not social distancing and eating communal food. His Health Department would shut down a business for this. Hypocrite. Do as I say, not as I do. I didn’t even need security camera footage to post.”