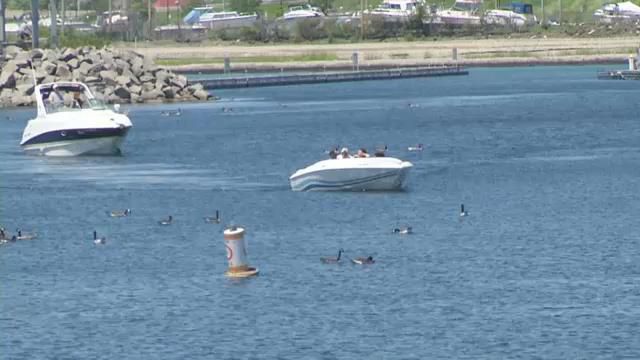 BUFFALO, N.Y. — The lure of sparking water on a bright, sunny day in Western New York might have plenty of people thinking about playing hooky to spend an afternoon boating.

Dan Hoffman has been boating for 50 years and teaching safety courses for the last two decades. But he says only about a third of boaters have taken a safety course.

"It's scary because a lot of things can happen on the water that people are not prepared for," he said.

Right now, anyone over the age of 22 can drive a boat without any kind of license or training. Anyone born after May 1, 1996, needs a boating safety certification to drive a boat or jet ski.

"A lot of people could just go out, grab a boat and not know what they're doing and cause trouble for the people who do. It happens more often than you would think," said Evan Beale, dock master at Safe Harbor Marina.

Jon Snyder, a Buffalo resident and former pilot for lake freighters says, "A few times [when I've been kayaking], I've had boats come right at me. I had to get my paddle up. I was afraid they were going to run me over.

Driving a jet ski? You have to have a boating safety certification but if you’re out on a power boat and over 22 years old, drive away; no license required. That may be changing very soon. Details tonight @SPECNewsBuffalo pic.twitter.com/FGw5hIkj4r

As more people take up kayaking, paddle boarding or boating as a hobby, the more proper and thorough safety training becomes important. A quick look at boating records shows:

Over the years, the state has gradually increased requirements to pilot a power boat but they're looking to make the regulations even tighter. Before the end of the session, state legislators are trying to pass Brianna’s Law which would require every person behind the wheel to take a safety course and pass a certification test within a year.

"The legislation is a really positive thing. I'm glad to see while it's come up several times in the years past, it really seems to have some momentum. Wherever they go, it's going to be an 8-hour classroom required class, with a multiple choice test taken at the end," said Hoffman.

There's widespread agreement and support for the proposed legislation, but there is concern about how those new laws would be implemented.

D. Scott Croft, the public affairs vice president of Boat Owners Association of the United States, said "There physically is not enough classroom courses to fulfill those tens of thousands of people taking a course, so it has to be accessible. By making everything in one year, it's a step backwards."

Hoffman added, "I only have myself and one other certified instructor to teach the America Safe Boating Course and we do need our instructors to be certified to meet the state standards. I would hope the legislature, in their wisdom, would at least give agencies some lead time to prepare for that year of intense teaching."

Hoffman says he expects at least 20,000 people would need to take the course in Erie and Niagara Counties alone.

For those would-be boaters looking to start preparing early, there are several options for taking the safety course. Boatus.org offers one for free online.

The status of the bill in the Senate or Assembly can be checked online.