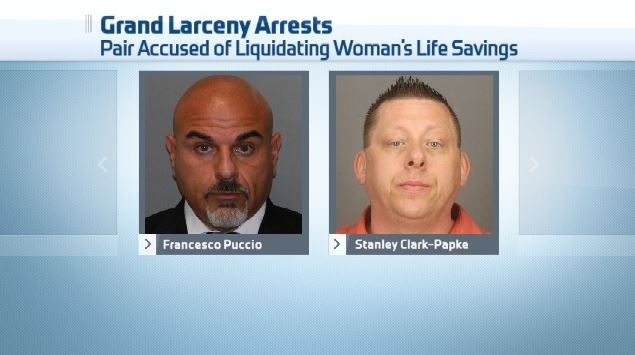 ROCHESTER, N.Y. -- He was entrusted to protect her retirement savings, but state police say a Rochester area financial investor, along with another man, drained an elderly Wheatland woman of her life's savings.

Francesco Puccio, 39, of Webster and Stanley Clark-Papke, 41, of Rochester face charges of Grand Larceny and Conspiracy.

Troopers say the pair drained some $345,000 from the 75-year-old victim from May 2011 to March 2014. Investigators say Clark-Papke, a client and friend of Puccio's, liquidated the woman's retirement and investment accounts and then systematically transferred the money through a series of unsecured loans.  He then distributed those loans into their own personal accounts.

Police say Puccio is employed as a financial advisor with Invictus Wealth Strategies of Pittsford.

Troopers say the scheme came to light when the victim learned she owned taxes to the IRS. Police say Puccio then arranged for the victim to take a reverse mortgage on her home.

Both men were arraigned in Wheatland Town Court and ordered to the Monroe County Jail pending bail.