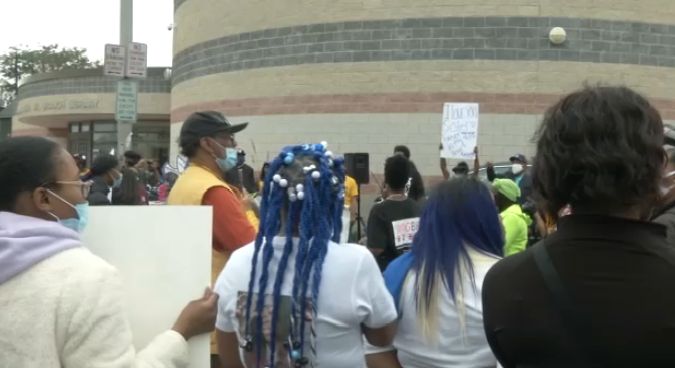 A crowd of activists marched down Broadway Street chanting, "Homicides have to go, because we say so."

They marched a few blocks and stopped at the Frank E. Merriweather, Jr. Library. Close by was the vigil site for Rayshionna Johnson, who was shot and killed during a street party on Glenwood Avenue, leaving behind three children.

"Hope is an expectation. We expect homicides to stop, we can't go around saying we can't do anything. Ray Ray's death will not go in vain," said Bishop Frederick Gelsey of One In Christ Church.

"We don't have to kill, we can come together and we can talk and we can love one and other. Tupac said this, if you're close to me I'm not going to encourage you to pick up that pistol," said Pastor Kenneth Simmons from Cold Springs Bible Chapel.

One by one, people shared thoughts and stories about Black on Black violence they have seen or experienced.

“Homicides got to go, because we say so” - community members march to honor Rayshionna Johnson and bring awareness to Black on Black crime. More tonight on @SPECNewsBuffalo pic.twitter.com/r24iTaeSpo

At one point, everyone took a knee to remember and honor all loved ones who were taken too early.

Many of Johnson's family members participated in the march. They tell Spectrum News that all they want now is closure and for her killer to come forward.

"You took someone that was special. Somebody that all these people out here are hurting about. Some of these people can't even talk about because she's gone," Nicole Bursie said.

"No more of this, we don't want it in our community, put the guns down," Markita Malone said.

Crime Stoppers Western New York is offering a $7,500 reward for information on the shooting.