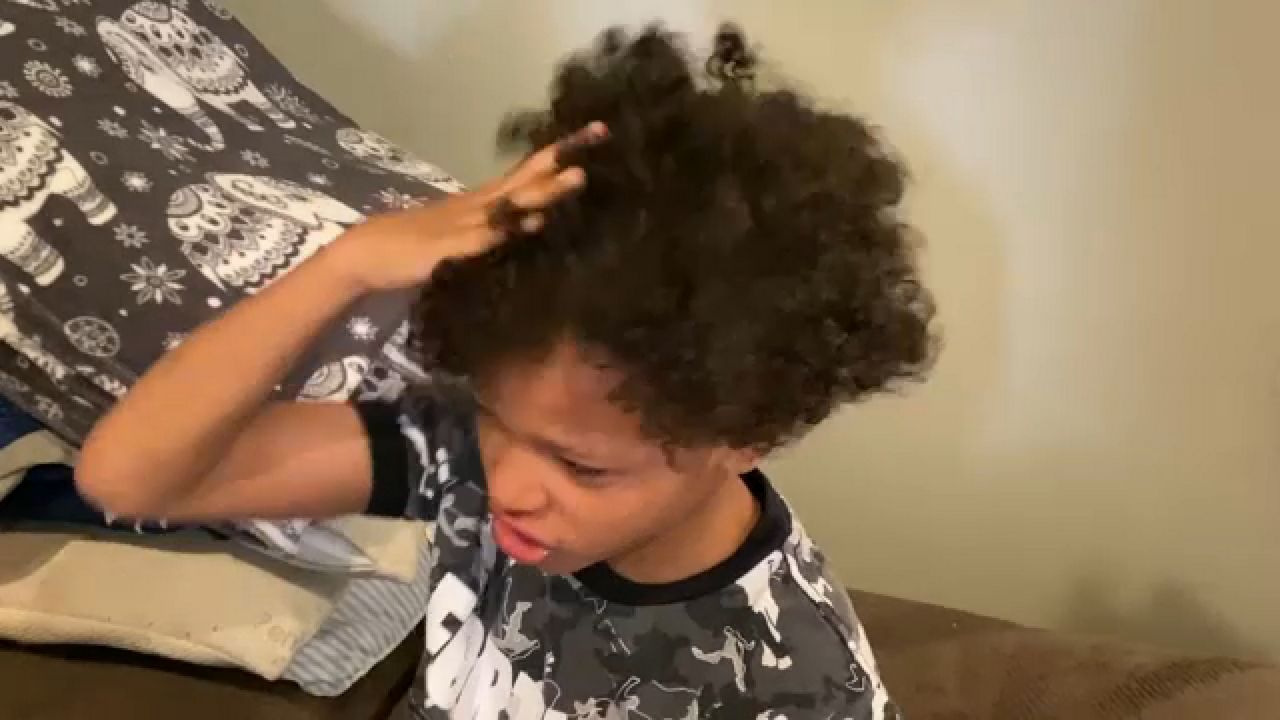 BUFFALO, N.Y. — Head lice is a condition that doesn't get a lot of attention, as most people who have it don't want to talk about it.

While cases took a little bit of a dip during the COVID-19 pandemic as people were in isolation, the condition is crawling its way back onto the heads of thousands of children and adults across the state.

Just the mere mention of the word lice makes you start scratching your now-instantly itchy head. Imagine actually finding it.

"I kinda freaked out," said Jazzmin Tomoser. "It's kind of a scary situation."

Tomoser, a 29-year-old from Buffalo, found it in her 8-year-old son Lorenzo's hair.

"And then I just ran my fingers along the back of his head, and right, just like, literally like this far, away from the scalp, I seen little bugs scurry," Tomoser said.

She then checked her 3-year-old daughter Kallie's hair where she also found live bugs and those yet to be hatched.

"If you pull it off the hair and you pinch it between your fingers, it kind of makes a snapping sound," said Tomoser. "And that's how you know it's an egg. And I seen them all over."

She then checked and found it in her own hair as well. And despite several over-the-counter treatments, she could never get to the root of the problem and get rid of the bugs.

"Oh yeah, it's gross," she said. "Just thinking about bugs living in your hair and then not knowing how long it's been there."

"By the time you find it in your child, they've had it six to eight weeks," said Marnie Murry.

Murry owns Naughty Nits in Buffalo, part of Lice Clinics of America. Hers is one of about 150 in the network, including Rochester, Syracuse and the Hudson Valley.

Lice are parasites that only live and stay on the human head, swinging from strand to strand. One lays eggs that are glued to the hair shaft.

Having lice is not a dirty person's condition.

"It's a social disease," Murry said. "It's usually the social butterflies that pick it up from their friends. Anyone that goes head to head can get it."

Marnie says with kids back in school full time, and the number of selfies taken these days, they are busier than ever mirroring a sharp uptick in the number of cases statewide.

"There's a lot of stigma attached and a lot of the wrong information gets passed around," Murry said. "So, the more we can educate people, and get good information out there about our treatment and services the better.

Tomoser took her kids to Naughty Nits, where they got the full removal treatment.

"A lot of people confuse it with a blow dryer, but it's a lot more sophisticated," said Murry.

Marnie treated Lorenzo's hair with a controlled heated air device that can kill the lice and 99.2% of eggs that live right along the scalp. That's followed by an organic product that loosens any eggs she then can pick out with the nit comb.

Kallie got hers done, too, followed by mom. It's a process Murry says saves families both time and money.

"The best moms are the confident moms who know that they just want to get back to life, get this taken care of," said Murry.

After treatment, moms like Tomoser are relieved their family is now bug-free.

"All the weight is off my shoulders," Tomoser said. "I don't have to worry about the itches, the bugs. It's peace of mind."

Clients are encouraged to go back for a follow-up within seven to 10 days.

Murry stresses that help is available whether you have a light or heavy infestation, but acting sooner can prevent the lice from spreading.

The price for the treatment can vary, but averages about $200 for those getting the heated treatment.