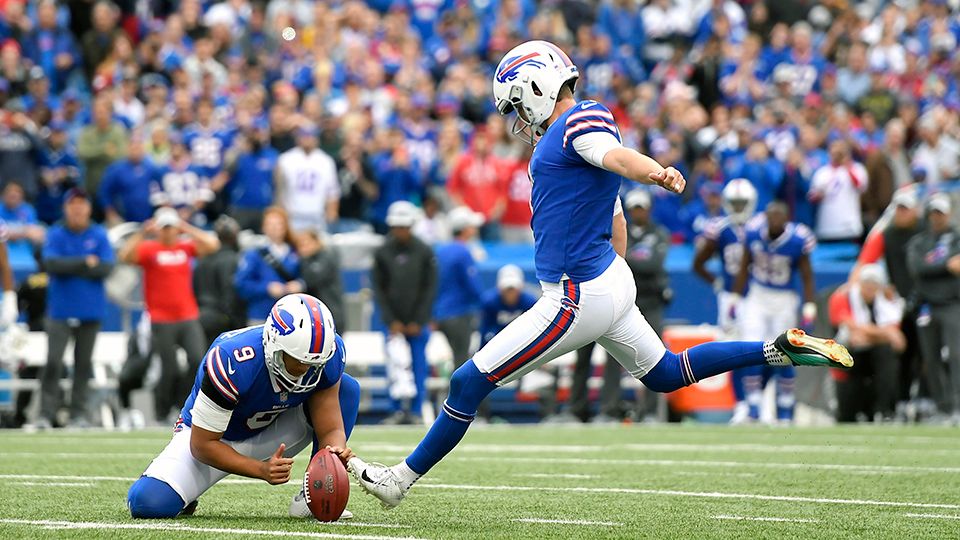 The Bills scored a one point win off the leg of kicker Stephen Hauschka last Sunday — how does someone prepare for those do-or-die moments?

"It's all mental at this level. It really is. If you believe in yourself and you believe you're going to succeed, you will," Hauschka said.

Hauschka's a soccer player who didn't take up football until his sophomore year of college. He's grown into the gig during his 11-year NFL career, especially on that mental side of things where he sees every kick — like Sunday's game-winner — well before it ever happens.

"This is something I've visualized probably hundreds of times," Hauschka said. "It's something I visualize a couple times a week, to have that opportunity, and not only to have that opportunity, but to want it. So when it does come up not only am I ready for it, but I want it and I want to be out there. And then I've seen myself succeed in that position so many times that I'm expecting to succeed."

Stephen Hauschka saw his game-winning kick hours before it happened Sunday against the Titans. The #Bills kicker let me in on some of his secrets and how he's earned #HauschMoney. My story tonight @SPECNewsBuffalo pic.twitter.com/o8iCEPwotm

Hauschka's succeeded better than nearly anyone in NFL history; he's currently fourth all-time in field goal percentage. There's plenty of reasons why he's "Hausch Money" and he's found them through brains, not brawn.

"I was a neuroscience major, which seems so long ago, but I was really just a student and happened to be good at sports," Hauschka said. "So this whole time playing football I've just been learning and growing and loving it. I kind of treat it like trial and error sometimes, but it's also kind of like research, scientific process behind some of this stuff."

And Hauschka gave me some of the answers he's found:

Breathing — "I'll kind of let you guys in on a secret. There's this breathing technique where you hold down your right nostril and just breath in and out of that," Hauschka said. "You're breathing in and out of your left nostril and if you do that for a couple minutes it puts you in a parasympathetic state. That's one of the things I do on the sidelines. I try and do it so it doesn't look like I'm picking my nose. So you hold down your right nostril and it calms down your body almost instantly."

Routine — "So I visualize myself being confident and feeling comfortable there. I might even take a couple steps back and just imagine I'm over there by the kicking net and hitting a ball really nice into the net," Hauschka said. "Then I'll grab a squirt of water and jog onto the field. I'll look over and kind of imagine them yelling 'Field goal! Field goal!' So I'm like, OK. I jog out, I see where the ball is. It's eight yards away. Take my steps and then I see it go through the middle of the uprights, hit the net nice and hard, put a good stroke on it, congratulate my guys, thank the lineman for doing a good job and then I go get a squirt of water, grab my kick-off tee and go do the same thing to prepare for a kick-off."

A sight the Bills are glad to see for themselves and if the moment presents itself Sunday in Houston against the Texans, "House Money" will be ready to capitalize.