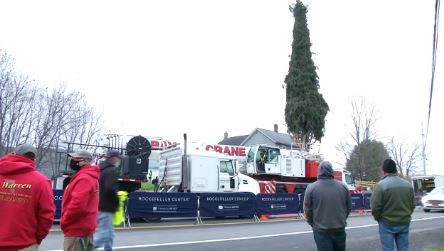 Standing 75 feet tall and weighing more than 11 tons, a Norway Spruce in Oneonta is ready for center stage.

Following months of searching, it was chosen as this year's Rockefeller Center tree. It now makes the 160-mile journey from its longtime home in Oneonta in Otsego County, to Midtown, Manhattan.

So how does Rockefeller Center's head gardener choose the best tree?

"I'm looking for that perfect Christmas tree, the one that's going to look good in front of 30 Rock and the one you want to put in your living room, have it look good for your Christmas season," said Erik Pauze, Rockefeller Center head gardener.

You'd think this would be a once in a lifetime event for a small town like Oneonta, but this is actually the second time in four years Rockefeller Center chose one of its trees.

When the Rockefeller Center crew made the trip back in 2016, this tree caught their eye.

While she's sad to see it go, its now former owner Paula Dick hopes it brings some light in what's been a bit of a dark time.

"We know this is kind of a sad year for a lot of people with COVID-19, and we hope that this just brings a little bit of joy into somebody's day, just to go by Rockefeller Center, see it on TV, and just enjoy the beauty of the tree," said Dick.

Paula's father, who also lives at the home and owns the nearby "Daddy Al's General Store," says it may take some getting used to.

"Now it's gone. Now when I sit on the porch I can see cars coming," said Al Dick.

Neighbors first knew something was up when a crew began prepping the tree weeks ago.

It wasn't until Wednesday morning when Rockefeller Center made the move official.

"For this one, I would say a couple of weeks ago I noticed they were doing something around here, then we kind of found out about it," said Ken Dautrich, Oneonta resident.

Less than 24-hours later, it was loaded onto a 115-foot flatbed and is now set for a Saturday morning arrival in New York City.

The tree lighting ceremony is set for Friday, December 1, though it's unclear at this point if it will be open to the public.