The New York State Thruway recently sent out an email to companies that utilize tandems on the I-90, restricting access as of this week for the crossovers to parking compounds.

Tractor-trailers are an important part of keeping our society rolling. But the job comes with a lot of challenges. The newest is facing tandem drivers on the NYS Thruway. 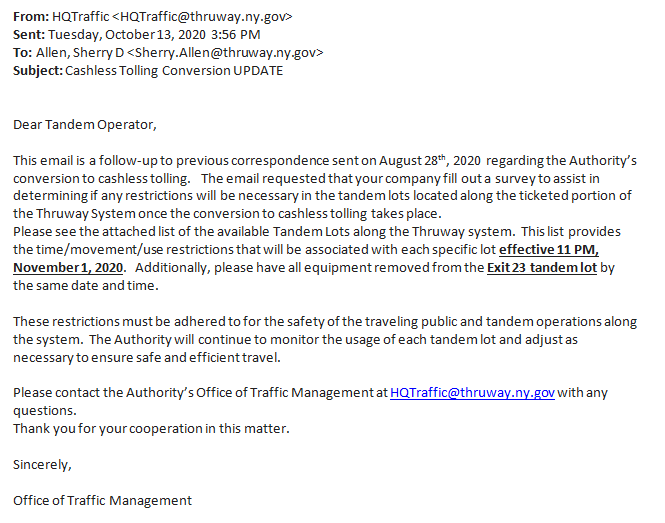 After 35 years on the road, he knows time is money. That’s why his boss at Clinton's Ditch Distributing sends out a lot of double or tandem loads.

The arrival of cashless tolling means changes that will impact his company’s operations, safety, and bottom line.

“We move freight with one driver, one truck, and we use less fuel than if we had to use two trucks and two drivers, to move the same amount of freight," said Transportation Manager Steve Erwin.

The Thruway Authority reports that 53 million tandem loads travel on the Thruway each year using their parking compounds.

For local companies, truck drivers, and consumers, time is money.

“It’s going to change. Our runs are definitely going to be longer,” said Hildreath.

“The minimum amount of additional time is 35 to 40 minutes. And in some places, it’s almost an hour or over an hour, and that’s in good weather,” said Erwin. 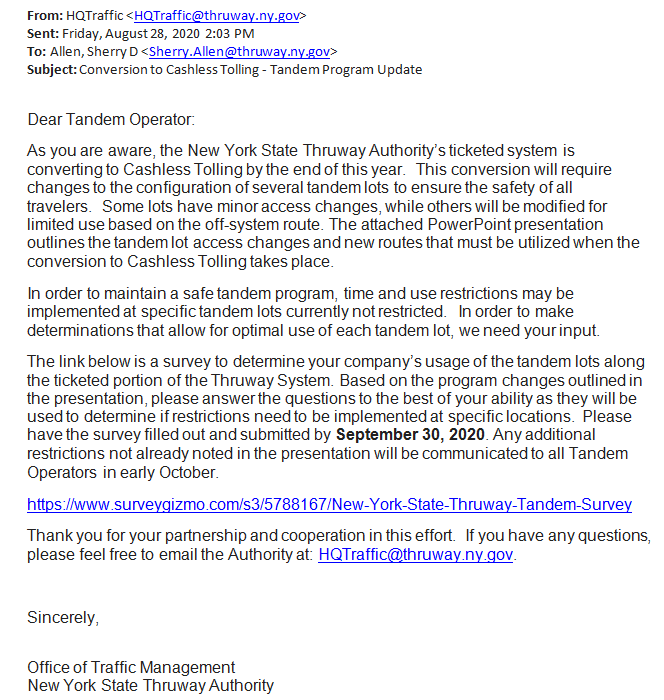 “You can see with the toll booth, the traffic is actually slowing down. And it’s still hard to pull out of the compound because of the non-stop traffic,” explained Erwin.

“They don’t always look out for us, and we can’t stop on a dime,” said Hildreath.

The Thruway is aware of concerns. A spokesman said in a statement, ”Due to the conversion to cashless tolling on the Thruway, access to select truck tandem lots owned by the Thruway Authority required modifications to enable longer combination vehicles (LCVS) continued safe use of the these lots. The modifications only impact the routes used by LCVS, not other types of commercial vehicles. All routes have been analyzed for safety to minimize the impacts to local traffic and to accommodate the turning radius of an LCV.”

The Thruway is also applying for federal permission to allow tandems off the Thruway. If this legislation is approved, they could quickly loop off the Thruway on to the closest interstate and get back on the Thruway in the direction they need to go, rather than traveling to the next Thruway exit to loop around.

“We’ve been talking about cashless tolling for years. This portion of it should have been done in the early stages. The Thruway is doing things like this, they’re putting in a ramp that will take the trucks out of the compound and put them back on the entrance ramp in a much more safe manner to pull out of the compound than we do today,” said Erwin.

Trucking companies are stressing their importance to local economies as they “overhaul” their entire business model to adapt to the new rules.

"Just pay attention to us. We’re trying to look out for them," urged Hildreath.