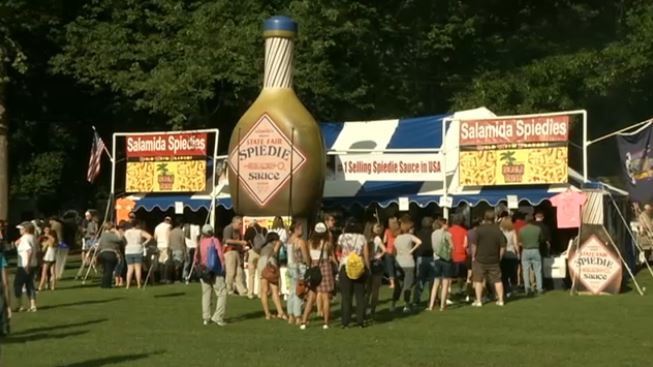 DICKINSON, N.Y. -- It's an annual tradition with humble beginnings.

Back in the early 80's, Rob Salamida and a group of families came together with an idea.

"This was an idea we had to celebrate at least one of the items people know this area for: Spiedies," said Salamida.

Salamida had sold the local delicacy since he was 15-years-old.  In 1975, he became the first person to bottle and sell spiedie marinade locally. Then, one Sunday afternoon, he brought together hundreds of people at Otsiningo Park for what would become the first ever Spiedie Fest.

It was just one day, and centered on a Spiedie cooking contest.

"It was a very serene afternoon,” said Salamida. “Everybody had a great time. We didn’t have a lot of vendors, but I just remember people coming up and saying how comfortable it was."

It all started with just a handful of vendors. 35 years later, the mission of bringing families together is just as important.

"I think the community needs to know without support like this, things like this will go away,” said Spiedie Fest Coordinator Dave Pasagno. “You need the support of the community to come out to show the vendors, the businesses we have a great community. They come out in full force to support stuff like this."

Since the small cook-off decades ago, the Spiedie Fest has grown into a three-day festival attended by 100,000 people. This year, it features everything from a Kansas concert, to a dog show.

Salamida says it’s hard to believe his event has grown into one of the biggest in the region.

"A lot of people come to this event from out of town and there are a lot of high school reunions that come this weekend,” said Salamida. “It's amazing but you really wonder how fast the time goes by."