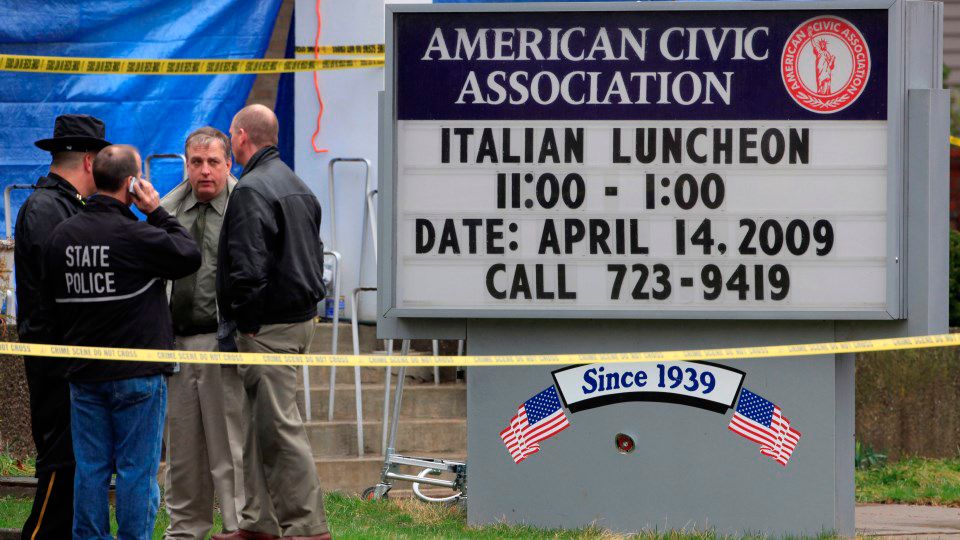 The worst mass shooting in New York state history unfolded quickly, but is a day where many of those involved in the day's events remember extensive detail about that spring day.

By mid-morning, a former ACA student quietly parks close enough to block the back exit.

"He put the car against the back door knowing at that time, just before he entered, they’d all be in a breakroom right by that back door," says Binghamton Police Chief Joseph Zikuski. 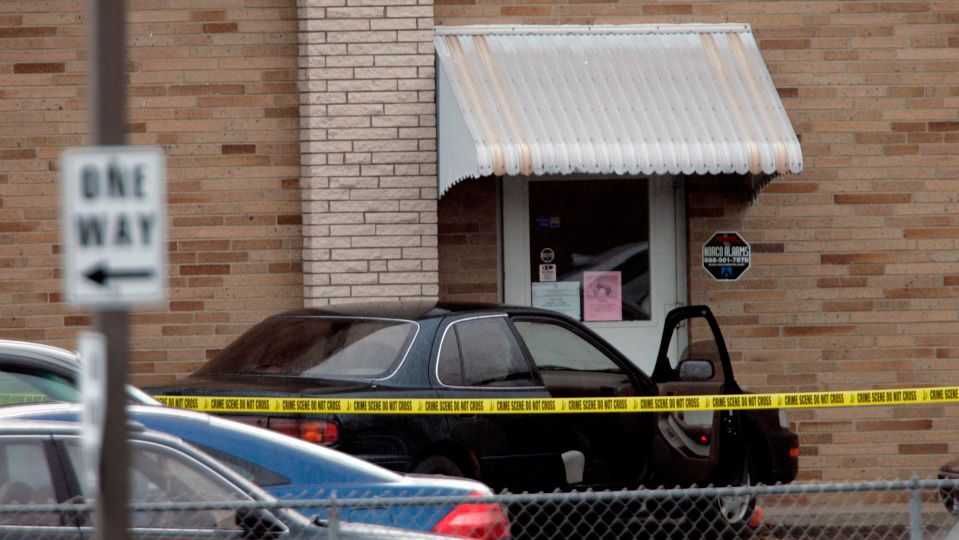 The gunman in the American Civic Association massacre barricaded the back door to the center to prevent would-be hostages from escaping. (Matt Rourke/AP)

Dressed in body armor with ammunition around his neck, the gunman walks to the front door, where receptionist Shirley DeLucia is working.

"She stood up and she asked, 'Hi, how can I help you' and with no warning whatsoever he just pulled out a gun and started shooting," says Robert Wu, who was a television reporter on the day the shooting happened.

With calls coming into Broome County dispatch, the language barrier between the hostages and dispatch caused a challenge.

"That's why they are going to the ACA — to strengthen their English skills," says reporter Erik Columbia, who helped cover the shooting that week. "Getting any details or coherent details was a struggle for everybody involved."

But minutes after the first call, the shots stopped, and attention turned to finding out what had happened — and why.

"There was a police officer who was standing near where the media were gathered," says Blazonis, who had gone to the scene. "I just kind of asked her, ‘Hey is there anything you can tell us about what is going on?’ And she looked at me and just the look on her face. There were tears in her eyes and all she said to me was, ‘It’s bad.’”

About 40 minutes after the first calls, police cautiously entered the ACA. 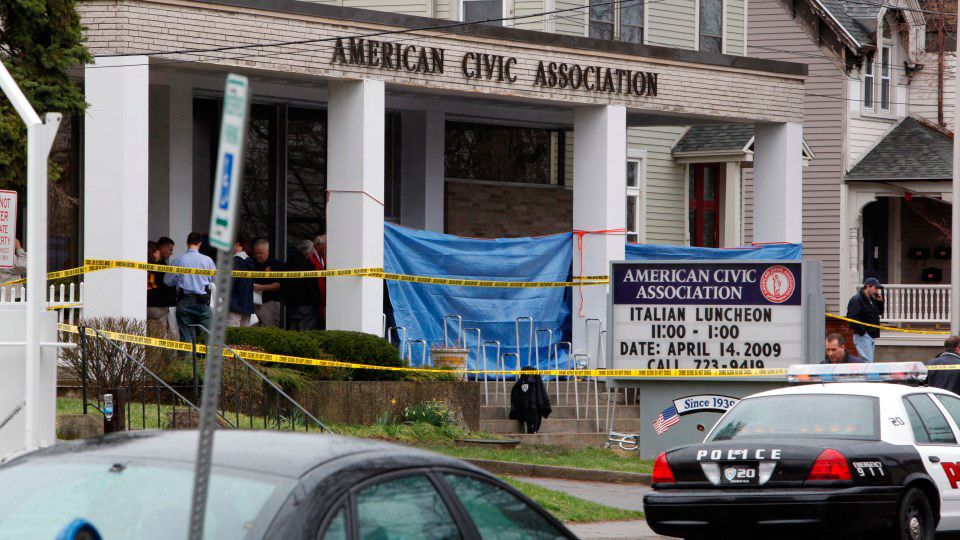 Investigators work on the scene in the immediate hours after a gunman opened fire at the American Civic Association. (Matt Rourke/AP)

"My major concern was that him and-or others were holding all these people as hostages and that if we were to enter without a plan, without being adequately prepared, that they could execute everybody in that room," Zikuski says.

Shirley DeLucia, who had lost a lot of blood, did survive. But 13 other teachers and students of the ACA, did not.

"It definitely took a while for the facts to sink in, but from that first day onward it was sad," Blazonis recalls 10 years later.

"Once a year," Columbia says, "when that day comes back around, you’re kind of forced back into that situation to where a community changed and it will never be the same."

DISPATCH CALLS GIVE CLUES TO HOW THE SHOOTING UNFOLDED

10:30 a.m.: Broome County dispatchers received the first call from the ACA, and said shots were coming from the second floor, and the gunman was still inside. Police officers pulling up to the Front Street scene were told not to "go into the building alone."

10:32 a.m.: Expressing concern for hostages huddled in the center's basement boiler room, authorities asked dispatchers to have them lock the doors — but no such locks existed. The dispatch operator said she was trying to help the group find something to use to barricade themselves inside.

10:33 a.m.: First police officers arrive at the ACA. No shots are fired after this point.

10:38 a.m.: After ACA receptionist Shirley DeLucia, who was shot, calls 911 to report the shooting and give a detailed description of the gunman, dispatch relayed the details to police at the scene.