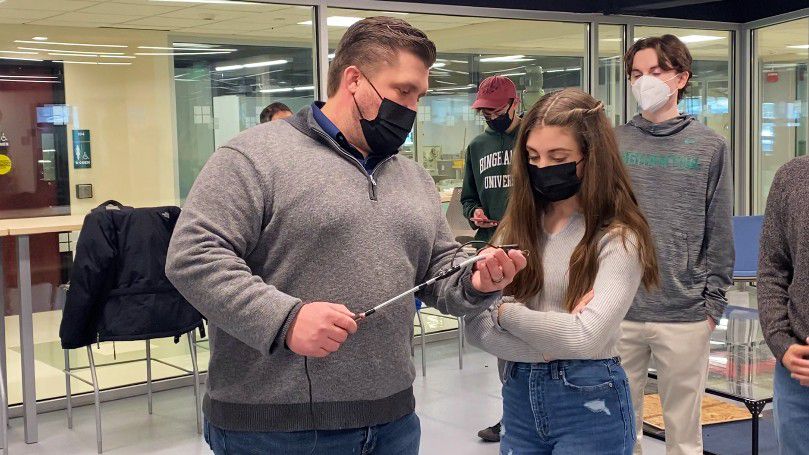 VESTAL, N.Y. -- Windsor 6th grader Delaney Dixon contracted Lyme disease when she was in just 4th grade, but after a tough struggle, she’s turned to engineering to make sure that no one has to go through what she did.

“I started having symptoms two weeks after I got bit by a tick,” said Dixon.

It's a  difficult reality for so many across the region.

“I had bouncing fevers, rashes and pains everywhere throughout my body,” said Dixon.

But Dixon wanted to help others.

She and her father developed a prototype for what they’re calling “The Tick Stick.”

“It’s a retractable wand with a flexible head,” said Dixon.

The tool uses an HD camera to allow users to check their own bodies for ticks in hard-to-reach places, and even remove them.

Dixon wanted a less intrusive way to make sure she was safe if she encounters ticks once again.

“I don’t want to be checked anymore. This is uncomfortable. So I had this vision in my head, a wand that can have a camera on it and a removal tool to help you remove and locate ticks," said Dixon.

Through a bit of trial and error, Dixon developed a working prototype, and her father couldn’t be happier.

“We’re super proud. We were just talking the other day how she’s kind of one of the people now that it’s the responsibility she has. She’s going to fight Lyme disease and that’s what she said she wanted to do,” said Chris Dixon, Delaney’s father.

The 6th grader is getting some help in that fight, thanks to engineering students at Binghamton University.

They helped develop an even stronger model, which they believe could hit the shelves sooner than you might think.

“We made it a little longer and we made it more bendable so you can reach more areas of your body, and also, upgraded the camera and now we connect to the phone. Eventually, we will get to get a mobile app to work with the camera," said Jung Wok Oh, a mechanical engineering senior.

While Dixon hopes to see her tool hit the market, she has much bigger goals.

“I’m just going to be able to sell these, and not just this, but a whole other line of tools to help prevent getting ticks and removing them if found. I’m not doing this for any money or anything. I’m doing this to fight Lyme disease,” said Dixon.