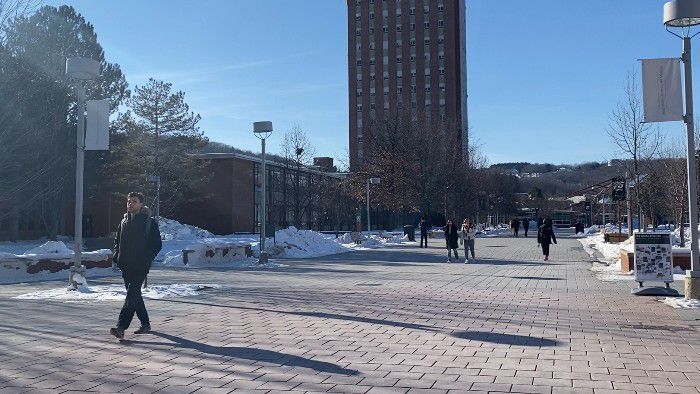 VESTAL, N.Y. — Binghamton University President Harvey Stegner delivered his state of the university address days after a new proposal from Gov. Kathy Hochul has some in the SUNY system worried about the future.

Gov. Kathy Hochul is considering elevating just two of the four SUNY university centers to flagship status in Buffalo and Stony Brook. Albany and Binghamton were left off the list.

“I want to lean into everyone’s strengths. There is not a cookie cutter approach to SUNY institutions anymore," Hochul said. "I have watched this opportunity be squandered for many years because we were not putting the money into it. We’re finally allowing more professors and faculty be hired."

Despite already being an R1 Research Institution and leading the way in lithium-ion battery development under Nobel Prize winner Stan Whittingham, Binghamton would not be eligible for the same funding.

“The criteria of selecting them really doesn’t have much to do with quality. When you look at U.S. News and World Report rankings, we’re higher ranked than both Stony Brook and Buffalo because we have better student retention, better graduation rates, better undergraduate teaching,” said Stegner.

Binghamton University alumna and longtime Assemblywoman Donna Lupardo agrees. In fact, she and state Sen. Fred Akshar teamed up to write a letter to the governor, urging her to reconsider.

“Most people really think of Binghamton as the top of the group, not only in terms of enrollment, but the kinds of quality research they’re doing in the worldwide attention they have gotten certainly from our Nobel prize laureate, so it’s something that we wanted to make sure the governor and her team understood," said Lupardo.

“The assemblywoman and I really are asking the governor and her staff to really just re-examine this, and if the designation is going to be given, we should in fact be giving that designation to all four schools,” said Akshar.

Hochul said support would still come to schools like Binghamton and views it as a major possible.

“I’m excited about this. We’re going to have new SUNY chancellor and we’re going to unleash the full potential of SUNY and that will be one of our strengths when we are trying to market our state to bring people here, so they shouldn’t worry about our plans but they’re going to be bold and very ambitious,” said Hochul.