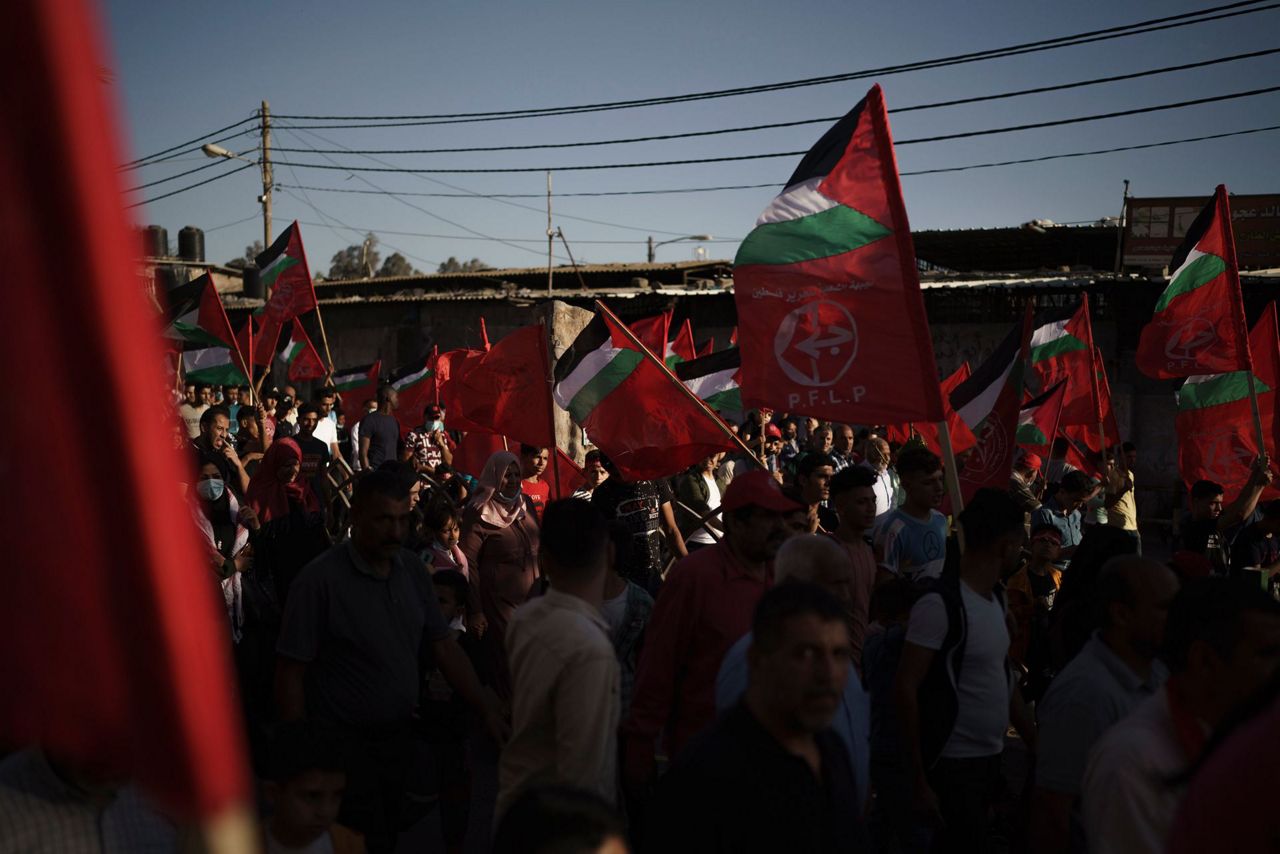 FILE - In this June 2, 2021 file photo, Palestinians attend a rally organized by the Popular Front for the Liberation of Palestine (PFLP), in Gaza City. Israel on Friday, Oct. 22, declared six prominent Palestinian human rights groups to be terrorist organizations, saying they were secretly linked to a left-wing militant movement. It was not immediately clear what the distinction would mean for the groups, most of which also protest rights violations by the Western-backed Palestinian Authority (AP Photo/Felipe Dana, File)

The declaration appeared to pave the way for Israel to raid their offices, seize assets, arrest staff and criminalize any public expressions of support for the groups. Most of the targeted organizations document alleged human rights violations by Israel as well as the Palestinian Authority, both of which routinely detain Palestinian activists.

Israeli and international rights groups condemned the move as an assault on civil society and expressed solidarity with the targeted organizations. Many noted that Israel already outlaws even peaceful political activities in the occupied West Bank. Palestinians want the territory — which Israel captured in the 1967 war — to form the main part of their future state.

The designated groups are Al-Haq, a human rights group founded in 1979, as well as the Addameer rights group, Defense for Children International-Palestine, the Bisan Center for Research and Development, the Union of Palestinian Women's Committees and the Union of Agricultural Work Committees.

The Israeli Defense Ministry said they are secretly linked to the Popular Front for the Liberation of Palestine, a secular, left-wing movement with a political party as well as an armed wing that has carried out deadly attacks against Israelis. Israel and Western countries consider the PFLP a terrorist organization.

The ministry’s statement was released during the Israeli and Palestinian weekend. Representatives from the targeted organizations could not immediately be reached for comment.

The Defense Ministry said the organizations are “controlled by senior leaders” of the PFLP and employ its members, including some who have “participated in terror activity.”

It said the groups serve as a “central source” of financing for the PFLP and had received “large sums of money from European countries and international organizations," without elaborating.

Israel has long accused human rights groups and international bodies of being biased against it and of singling it out while ignoring graver violations by other countries.

The European Union delegation to the Palestinian territories acknowledged financing activities by some of the groups. It said past allegations of the misuse of EU funds by partners “have not been substantiated" but that it takes the matter seriously and is looking into it.

“EU funding to Palestinian civil society organizations is an important element of our support for the two state solution,” it said.

The local office of the U.N. high commissioner for human rights said that in making the declaration, Israel had listed “extremely vague or irrelevant reasons, including entirely peaceful and legitimate activities.”

It called on Israel to “fully respect the rights to freedom of association and expression, without any interference or harassment against the organizations or their staff,” adding that it considers some of the Palestinian organizations to be “key partners.”

The U.S. State Department said it would seek more information from Israel on the designation and had not been given advance warning about it.

The Palestinian Authority, which has recently cracked down on its own critics, condemned what it said was a “strategic assault on Palestinian civil society and the Palestinian people’s fundamental right to oppose Israel’s illegal occupation and expose its continuing crimes."

New York-based Human Rights Watch and London-based Amnesty International released a joint statement condemning the move as an “attack by the Israeli government on the international human rights movement."

“For decades, Israeli authorities have systematically sought to muzzle human rights monitoring and punish those who criticize its repressive rule over Palestinians,” they said. “This decision is an alarming escalation that threatens to shut down the work of Palestine’s most prominent civil society organizations.”

The Israeli human rights group B'Tselem called the government's declaration “an act characteristic of totalitarian regimes, with the clear purpose of shutting down these organizations."

“B’Tselem stands in solidarity with our Palestinian colleagues, is proud of our joint work over the years – and is steadfast to continue so.”