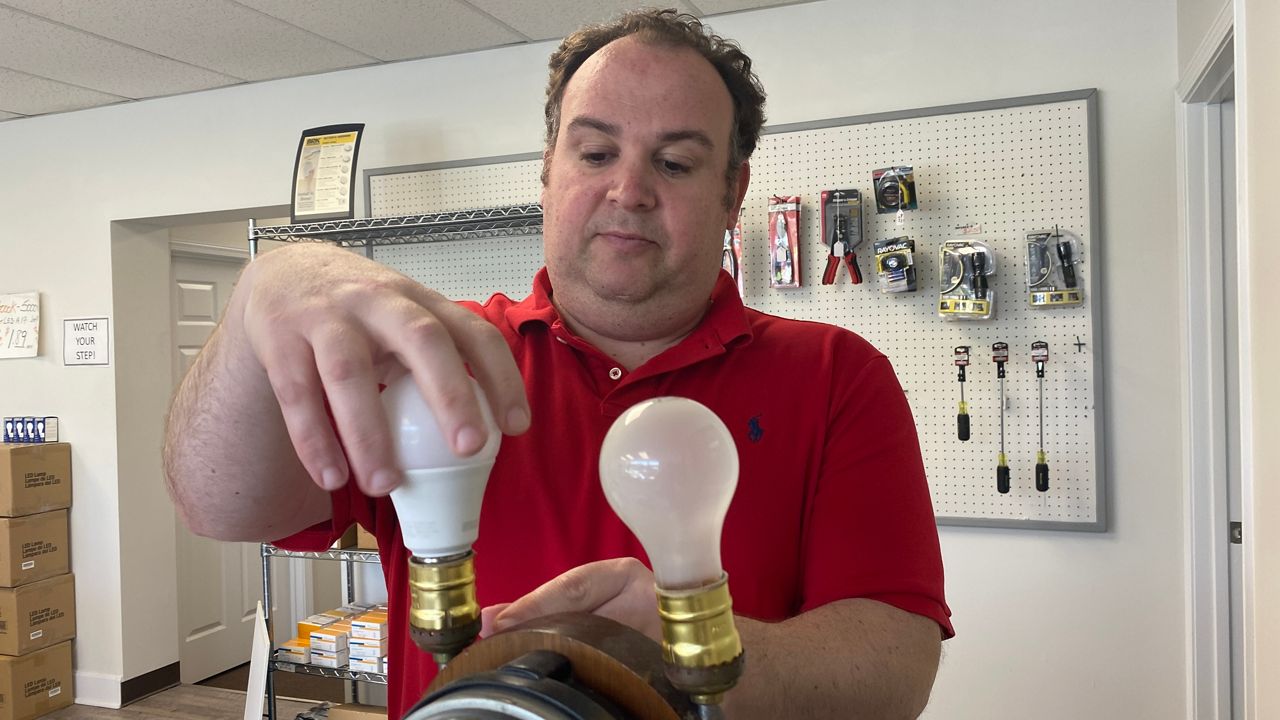 Jeff Nefouse flipped the switch on incandescent light bulbs years ago. Soon most Americans will have to do the same, but Nefouse is ready help customers understand the benefits of switching over. (Spectrum News 1/Ashley N. Brown)

LOUISVILLE, Ky. — Incandescent bulbs have been lighting the world for centuries. New rules from the Biden administration are phasing out that source of light to conserve energy and help Americans save money.


Casting a light on the differences between incandescent and LED bulbs is Jeff Nefouse’s specialty at A-M Electric.

“I’ll hit on the switch and you can see the meter starts to go and starting to go pretty fast and keeps on going as the light heats,” said Nefouse, the vice president of the store, as he showed how much energy an incandescent bulb consumes.

Nefouse hasn’t changed a light bulb in his home in five years. He said it’s because he switched from incandescent to LED bulbs.

“It’s not always proven there are going to be exceptions to the rule, but most of the time they’re going to last about 10 times longer than normal light bulbs,” he explained.

The lighting store was Nefouse’s first job. The company was started by his grandfather and is now run by his father, Greg.

Greg’s 50-year-long career started in a lighting factory where he saw the making of incandescent bulbs.

New efficiency standards by the Biden administration will phase out most new incandescent bulb sales in 2023.

“Eventually, it’ll all convert over,” Greg Nefouse said. “There are some people that won’t change, but the problem is eventually that product will be discontinued.”

A-M Electric is down to its last boxes of the incandescent bulbs.

Customers making the switch to LED may pay a few dollars more, but Jeff Nefouse said they’ll save even more.

“They do help on your bill,” he said. “LG&E rates keep on going up and you got to combat it somehow, and that LED is definitely a good choice for people.”

The Department of Energy says the light bulb rule will save consumers nearly $3 billion in utility bills and substantially reduce domestic carbon emissions.

“These days, you can Bluetooth everything and you can play music through lighting,” Jeff Nefouse explained. “You can control your security from your phone. Incandescents can’t do that.”

The Department of Energy says they project the rules to cut carbon emissions by 200 million metric tons in the first 30 years.