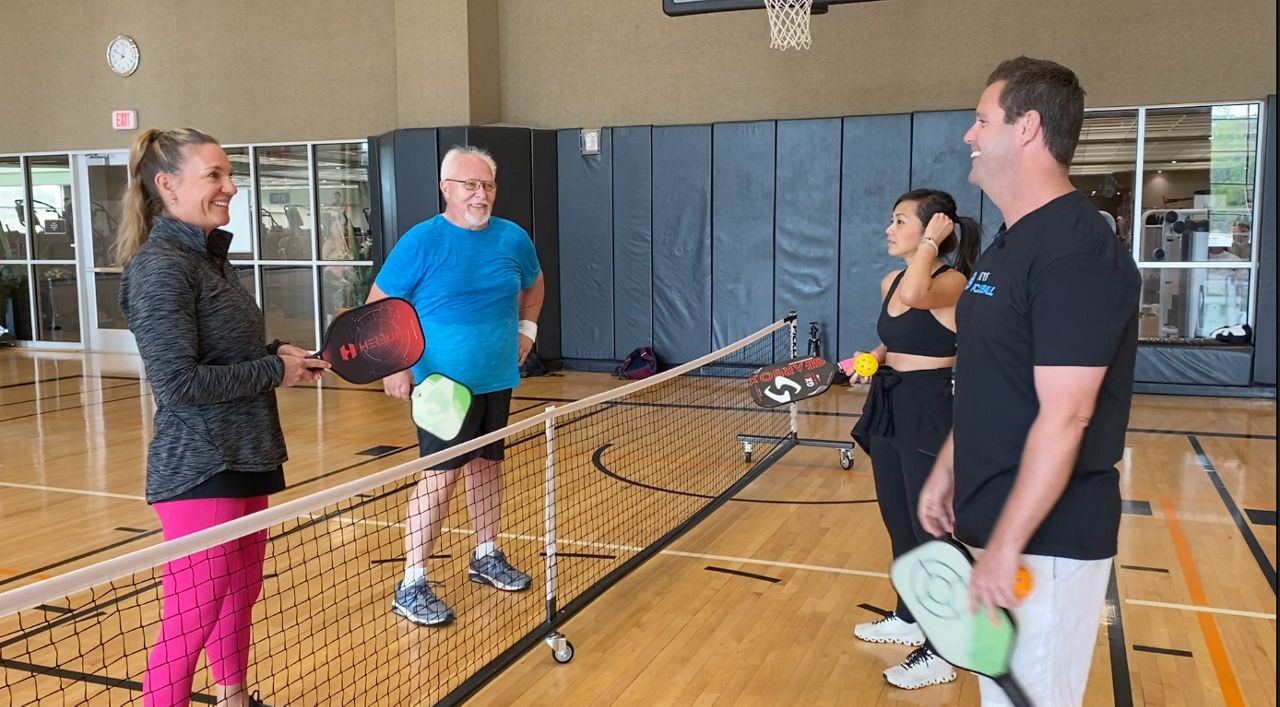 Pickleball players discuss the rules of the game.

Pickleball 101: What gets people hooked on the sport?

A combination between tennis, badminton and ping pong is taking the sports world by storm.

Pickleball is a low-impact sport that started in a Seattle, Washington backyard in 1965. But over the last five years, it's become a rising star, clinching the title as America's fastest growing sport for the second year in a row.

Pickleball was created in 1965

The game is a combination between tennis, badminton and ping pong

There are 4.8 million pickleball players in the U.S.

Lane Ethridge is a pickleball instructor in North Carolina

Pickleball is a game of skill and technique that everyone can play. The game has 4.8 million players nationwide, with the average age of players being 38 years old.

Life Time, a fitness center in Raleigh, introduced pickleball at its club four months ago. They first offered eight hours of open play a week, but due to exploding demand, they now offer 34 hours of pickleball.

Lane Ethridge is a pickleball instructor at Life Time, and he picked up a pickleball paddle for the first time in 2018.

"I was playing racketball at a local YMCA, and one of the employees asked if I wanted to play pickleball the next morning. I had no idea what he was talking about, I have never heard of this sport," Ethridge said.

Ethridge was instantly hooked. The former school-teacher-turned-entrepreneur has centered the last three years of his life around this sport.

"I fell in love with the idea of getting better at playing a game that I didn't know," Ethridge said.

Ethridge now teaches other people how to play the game.

"My passion is to connect with people on a personal level. Pickleball is more about life than the sport, you have a great time trying to connect with someone," Ethridge said.

The game is played inside or outside on a badminton-sized court, with a net set at 34 inches, using a plastic ball and wooden or composite paddles that are double the size of ping-pong paddles. Players can play as singles or doubles. Ethridge says the rules of the game can be learned in a single-session.

"You can play at any level, you can play recreationally, you can get competitive and play in leagues, and you can play in tournaments in all different levels. I wanted to compete again and get the athletic competitive side of me. I fell in love more with watching my students and friends compete. I have a heart for teaching other people to learn," Ethridge said.

John Spencer learned the game from Ethridge, and he began playing three months ago.

"First time, Lane comes in and shows everyone the techniques and pointers from playing and from that point on, I was addicted," Spencer said.

During an hour of pickleball, Spencer's watch clocked in 570 active calories. He says playing pickleball allows him to use his lateral movement that he can't use on the basketball court anymore.

"It's actually better than being on the stair master, but the workout is great, but the community of people that is here is really the reason we come," Spencer said.

Ethridge agrees that the pickleball community is what makes the sport what it is.

"A lot of people come into the gym, they work out and leave. I have a client that has been here for six years. She said she's made more friends in three months [playing pickleball] than in six years," Ethridge said.

Although the game can get competitive, Ethridge says that athleticism is not a factor.

"Ironically, the first time I played, I got beat by a 77-year-old guy. It doesn't matter how athletic you are. I figured out I need to learn how to play this sport," Ethridge said.

Ethridge's goal is to spread awareness for the game, that it doesn't made your age or physical abilities, the game can be modified for anyone and everyone who wants to play.

"I didn't know about pickleball three years ago, and now it's become my entire livelihood, my whole network is based around pickleballl, for those that are thinking about it or wanting to try it, just go, say yes, try it around your local area and see what you think about it," Ethridge said.