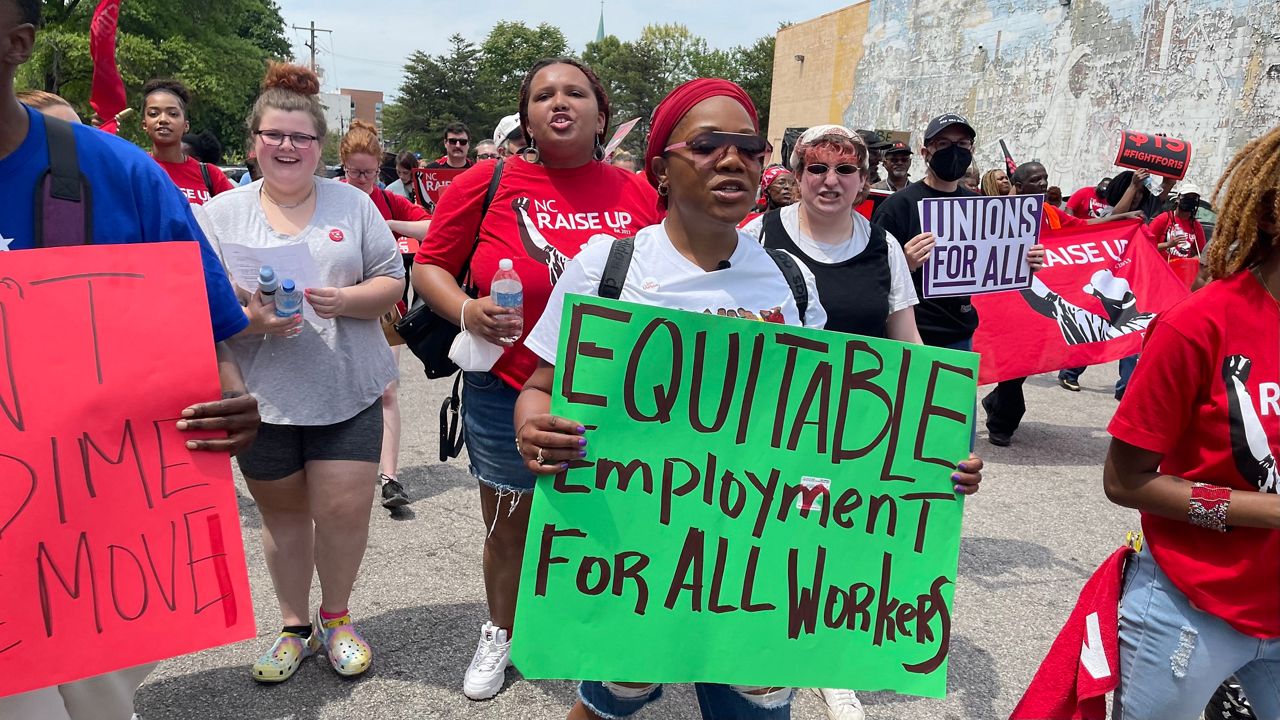 DURHAM, N.C. — When the state legislature reconvenes Wednesday, state employees will be expressing concern about the budget. Health care workers feel especially burned out and underpaid. Union leaders say they’re preparing a mass outreach ahead of the primary election to put forward their demands.

Over the weekend, more than 200 workers from across the Triangle showed out to march for higher wages and better working conditions, including people like fast-food workers, teachers, Amazon employees, health care technicians and city workers. They want to take their fight to their employers but also politicians with the upcoming primary election.

“We hope more people will see us unified, standing in solidarity,” said Barnette, a member of Durham City Workers Union. “We are all essential. We are all important. We all matter to the democracy of this country.”

Barnette has been a Durham city worker for 23 years. She currently works on community development and affordable housing.

“We want to make sure we can afford to live in the city for which we work,” Barnette said. “Currently the wages aren’t to the levels where you can find affordable housing in Durham. That’s a problem.”

“We need elected officials who are going to hear what the workers are saying,” Barnette said. “We want elected officials to have empathy for what we’re enduring. An economy when things are happening, we have no control over.”

She wants workers to rise up and vote in the upcoming primaries.

“When you feel at a loss, what do you do to get the attention of the people that are in position to make the change that’s need? You march and hopefully we can be heard,” she said.

Barnette believes in a living wage amid rising gas and food prices.

“Equitable employment means having the salary to be able to afford to live and work in the city that you call home,” she said.

Barnette also has concerns about the racial wealth gap when it comes to Black and brown women. The Economic Policy Institute says a full-time Black worker earns 20% less than a full-time white worker.

Starbucks workers were also at the march. This comes after a Starbucks in Boone won their union vote on Saturday, 33-2, which makes them the first certified Starbucks union in the state of North Carolina. A similar effort is underway in the Triangle at a Raleigh Starbucks location. The vote count at the Raleigh Starbucks is 11 a.m. Tuesday morning.