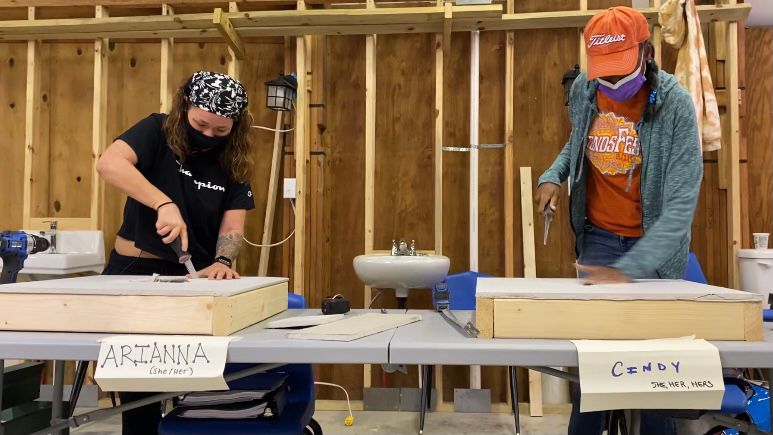 CARRBORO, N.C — Nora Spencer never went to school for construction. She picked up her handiness over the years through renovating her own home and helping with others.

But she noticed that she never saw other women in the field, working with construction teams.

“What we have as women is really an opportunity gap where, like the STEM fields, people don’t talk to us about this as a career opportunity when we’re young,” Spencer said.

So, she decided to do something about it. Three years ago she started Hope Renovations. It's a trades training organization for women.

Last year, they had their first training session.

This year, Arianna Krajewski is one of those students. Krajewski began in construction in solar after deciding to completely switch her career path.

“I had a great personality to do sales, and I was doing sales and I was miserable. I was pulling my hair out. I absolutely hated it. So, I took a leap. I went towards solar, and I knew that my future was in the trades,” Krajewski said.

After moving to the state, her fiancé found Hope Renovations, and Krajewski was thrilled to find a program with the message she was preaching: women belong in the trades.

“The job too for me, it wasn’t hard, and that was the most surprising part for me was this wasn’t impossible,” Krajewski said. “There’s women like me or minorities like me that wasn’t aware of this.”

Spencer says that where there is a gap, women need to have a place at the table. According to the North Carolina Department of Commerce, from 2010 to 2018 the number of women working in construction rose 81%.

That number, however, was only around 4,500 people because there were so few women in the field to begin. With this training, Krajewski is excited to get back into the field, and increase those numbers. She also hopes other women take the leap she did.

“If you don’t like where you are, try something different. Break that glass. Break that wall, because you might really fit in,” Krajewski said. “Just because it’s a male dominated world out there, doesn’t matter. You can succeed.”