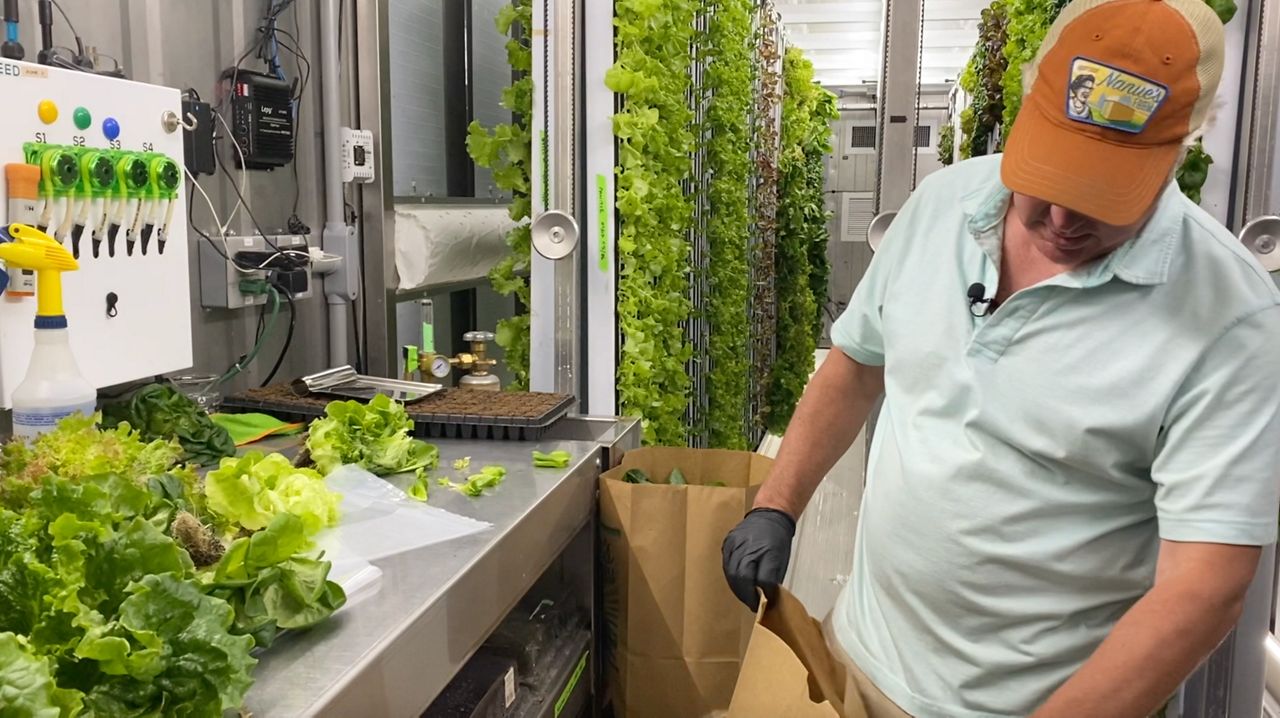 RALEIGH, N.C. — Summer is one of the busiest and most profitable times for farmers across the state, but what if they could grow produce year round?

Nanue’s Farm in Raleigh is using some advanced technology to do just that.

Nanue’s Farm is on S. West Street, what some may say is a pretty strange place for a farm.

“This is in downtown Raleigh. You can see the great skyline we have here,” said Trevor Spear, the owner of Nanue’s Farm. “I walk to work when I can. I don’t have to drive.”

Spear admits that a seemingly empty parking lot with a shipping container is not what most people expect to see when they arrive at a farm.

“It’s funny because people don’t understand what it is. They think it’s just a shipping container and people are storing stuff inside it,” Spear said.

Nanue’s probably looks more like a science experiment than a farm.

“It’s 65 degrees, 60% humidity. Co2 runs at night, so we’re like 2,000 parts of Co2 in there. It’s optimal growing conditions for lettuce and that’s how we do it in seven weeks time,” Spear explained.

Spear specializes in leafy, crunchy greens. Something else you can hear inside the farm, from time to time, is classical music.

“We play classical music at night and I think it makes a difference. They like it. Sometimes we play a little Van Halen but usually Bach or Beethoven,” said Spear who knows that a little TLC goes a long way and said every lettuce has a name.

"When I was a kid I would go have summers at Nanue’s house, and she had a huge garden, an acre size garden. I would go up and down the rows with her as a kid. That’s where I probably got the bug because once it bites you, you live with the sting," Spear said.

Nanue’s Farm is getting a second container in June and hopefully a third by the end of the year. They currently offer home delivery to a few areas and are looking into creating a farm stand. The majority of the produce is sold to local restaurants in the area.

"When chefs come and tour the farm, they open the door and they’re like, 'Wow.' We can hold 5,000 heads of lettuce. We harvest 60 cases a week, so when they walk in and see that much lettuce growing and looking as good as it does, it’s a take back," Spear said.

If you’re interested in trying some of their lettuce, you can also find a Nanue’s salad at Hummingbird, a restaurant in Raleigh.

The technology that Nanue’s Farm uses was created by Boston based company, Freight Farms. Each container has thousands of LED grow lights, temperature controls and uses between five and ten gallons of water each day.

The containers also have cameras and connect to Wi-Fi so it can be monitored from an app or website. Freight Farms said the goal is to replicate an ideal farming environment so that more people have access to fresh produce.

“In the U.S., food moves 500 to 1,000 miles, predominantly from California. If you can move the farm then you can put a farm in a food desert, and then you can grow the food and the hyperlocal food and the high nutritional values of that food. Either food deserts or even urban areas,” said James Woolard, the chief marketing officer for Freight Farms. “You might not think it’s a food desert but it is from a socioeconomic point of view and an access point of view.”