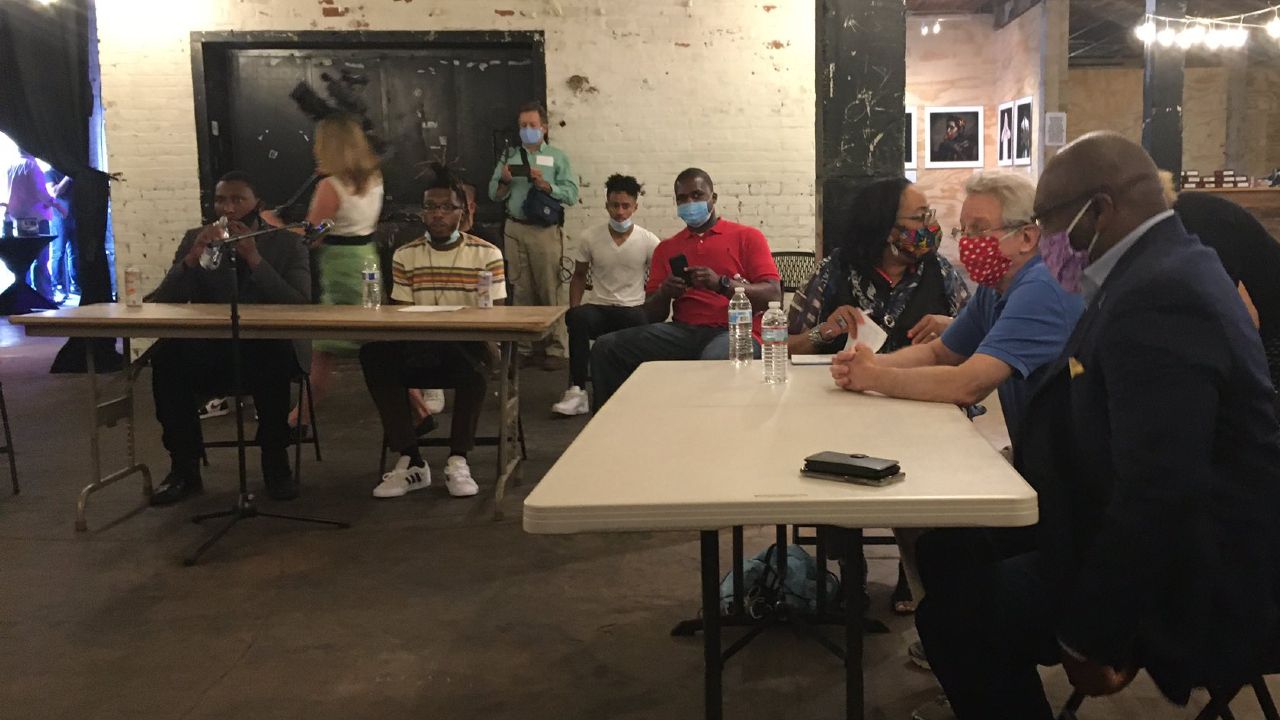 DURHAM, N.C. -- It was another sign of peace in the Bull City after advocates sat down with local officials for a summit.

The meeting focused on how to get more funds to help out the black community, plus reducing racial biases from law enforcement in minority neighborhoods.

"If black people can establish their own schools, their own grocery stores, their own resources and infrastructure, black people will police themselves. We don't need society's knee on our neck anymore," says organizer Skip Gibbs of OAM Durham.

The meeting lasted for more than a hour. Parts of it were streamed on social media. However, other community advocates voiced their anger outside saying they weren't allowed to attend the meeting.

Protesters pushed for the meeting after they blocked the Durham Freeway for several minutes Monday afternoon. They vowed not to leave until Birkhead agreed to a meeting.

A few moments ago, I, along with Durham Police Chief Davis, met with various community groups. We are proud to report those at the table reflected who we are in Durham. We’re fortunate to live in a place that represents the diversity of America. Durham - both city and county – is populated and enjoyed by human beings of all races, ethnicities, ages, backgrounds, and gender working towards their American dream.

I am grateful Durham has remained peaceful this week. That peace does not mean we are ok with recent events. Today’s meeting was a gathering of people who are angry about the unfulfilled promise of our Country. Because Chief Davis, and myself, are both African-American, we know first-hand the struggle to survive because we’ve both lived it.

During our discussion, we talked about the systematic racism that still exists in our society. We listened to specific examples of minorities being disproportionally arrested and behind bars and in some cases, have experienced mistreatment by law enforcement. We listened to the larger question about why disparities still exist between black and white. We talked about the connection between poverty and crime. We know too many people have less resources than others; and as a result, feel hopeless. This directly leads to feelings that the community is intimidated by us and not protected and that the police are not the people, and the people are not the police.

We stand here, right now, to say we are here to help.

As Sheriff, I am committed to criminal justice reform. As a fellow Durham resident, I pledge to work together to change the status quo in order to level the playing field for everyone.

Our nation is crying out for change. We’ve seen violence in places that are very close to us. But right here in Durham, we are releasing our frustration in peaceful and constructive ways. My office will continue working with Chief Davis and the Durham Police Department to give our community the space it needs to keep telling us how we can all be better.

As your Durham County Sheriff, I pledge to work with this group and any others who want to constructively assist with change.

As I said a statement released a week ago, I was outraged and embarrassed about what happened to Mr. George Floyd. I’ve spent more than 35 years in law enforcement to change things and to be at the table where critical decisions are made. What happened in Minneapolis is the exact opposite of what I stand for. While what we saw occurred 1200 miles away from us, it still hit very close to home.

As Sheriff, I am committed to change. What happened today, with these people, epitomizes a fundamental philosophy we have at the Sheriff’s Office: transparency, engagement, and accountability.

In order to understand what our community wants and needs, we have to listen.
And that is exactly what happened here today. I hear you! I'd like to thank Skip Gibbs for organizing today's summit and everyone who participated and made it successful.

Together, we can, and we will do this. From the law enforcement side, I am committed to being part of the solution.

We are One Community, One Durham

Gibbs says the next step is to put together formal recommendations for the city to consider.