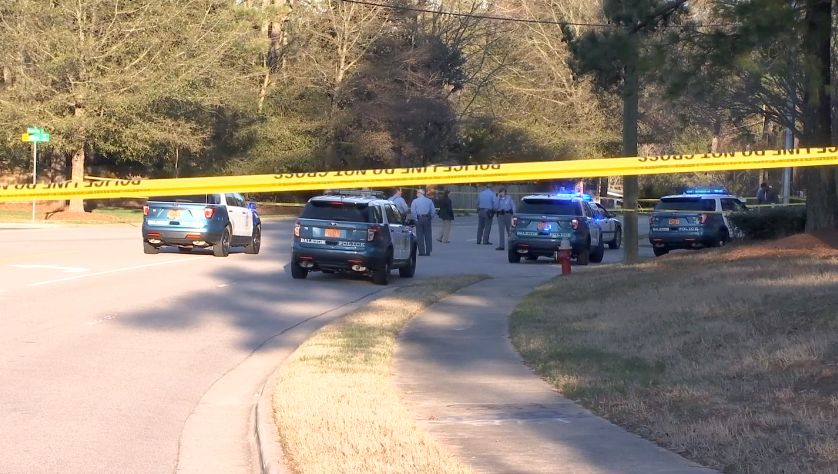 The Raleigh Police Department released its initial report on the shooting Wednesday morning. Members of the media and advocacy groups were permitted to watch the officer's body camera footage, which is otherwise sealed under a court order.

The confrontation began after someone called 911 just before 3 p.m. and reported they had seen a handgun fall out of a man's shirt. A Raleigh police officer, identified as Senior Officer W.B. Tapscott, was the first on the scene.

The video appears to show Tapscott get out of his car and encounter a man later identified as Keith Collins. Collins momentarily raises his hands but keeps walking past Tapscott's car. The video shows Tapscott follow Collins, who begins to run.

There is no audio for about the first 30 seconds of the video. When the audio begins, Tapscott is yelling at Collins to stop and show his hands as he runs away. A couple of seconds later, Collins turns toward Tapscott. The preliminary report states Collins pointed a handgun at Tapscott. Collins' movements in the video do not necessarily indicate otherwise but it's hard to tell what, if anything, is in Collins' hands.

At that point, Tapscott fires four shots. Collins falls to the ground and Tapscott backs away. At this point, the report said Collins pointed the object at Tapscott, who fired three more rounds. Tapscott then took cover behind a utility pole, from which he fired four more rounds after Collins allegedly pointed the object at him a third time. Collins can be seen moving in the video, but the camera is too far away to show Collins' hands or a weapon. Police did not allow members of the media to stop the video and analyze it frame-by-frame.

At that point, officers approached and kicked a handgun away from Collins. Collins can be heard on the video saying it was a BB gun, and investigators later confirmed it was. Collins died from his injuries later that afternoon.

Reaction among those in the room varied. Rick Armstrong, of the Raleigh Police Protective Association, called the situation tragic but said the officer's actions were justifiable. He said in the heat of the moment, it's hard to tell exactly what someone might be holding in their hands.

“Even after watching it, I don't know if that was a BB gun or a real gun, and you have to treat it as a real gun,” he said. “If it looks like it's a real gun, it could be a deadly threat to you.”

Justice Served NC's Diana Powell, herself a firearms instructor who has worked with law enforcement, said Tapscott should have stopped shooting as soon as Collins was down. She conceded she probably also would have opened fire had she felt her life was in danger.

Raleigh-Apex NAACP President Gerald Givens, Jr. said the situation is “an indictment on our society.” He said the caller's initial description put the officer in a combative state of mind that was only reinforced in the way he initiated the contact. Givens said there was no call stating Collins had gone into a store or committed a robbery.

“This is not a video game where you can restart it,” he said. “Keith Collins is no longer here for three minutes and five seconds.”

Givens said Collins' family will speak to the media Thursday.