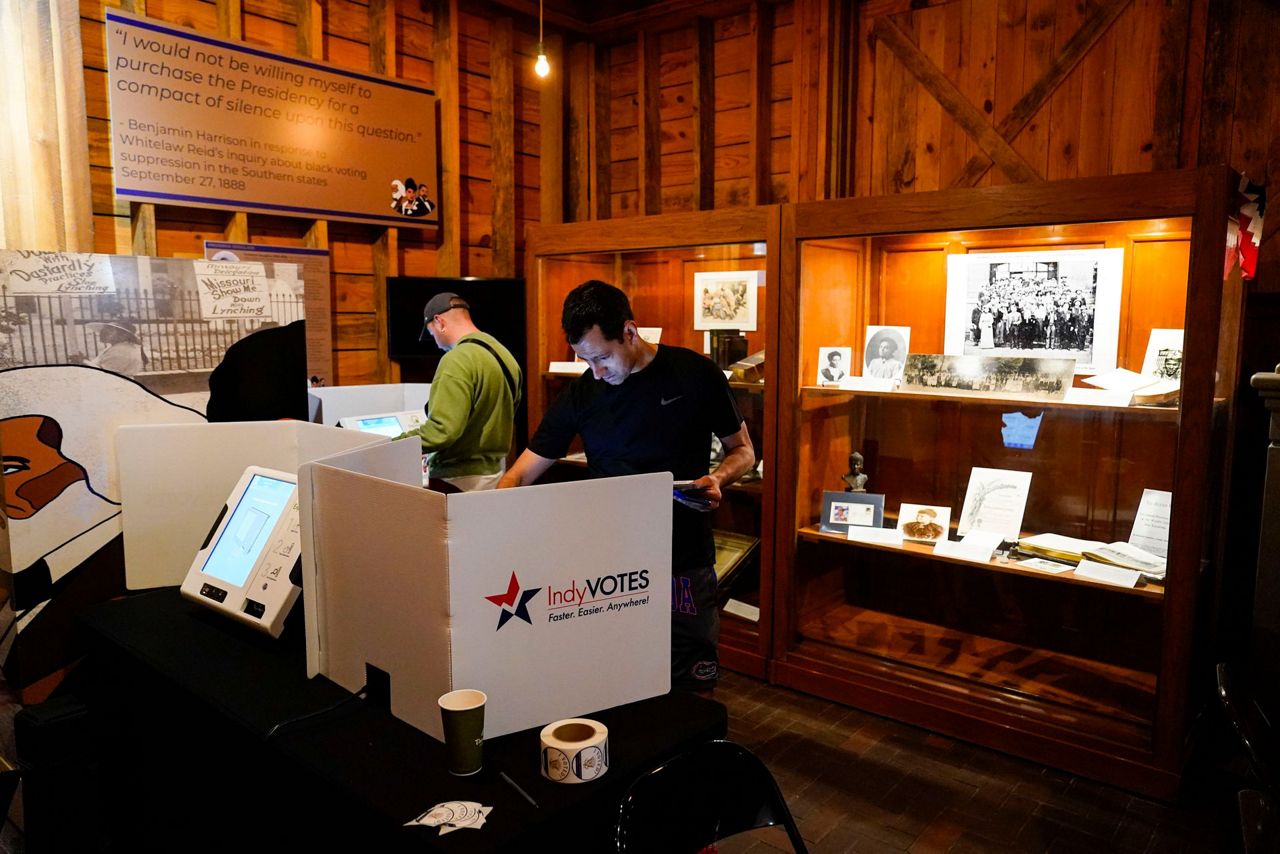 1 of 10
Voters mark their ballots in the Indiana primary election among the display cases at the Benjamin Harrison Presidential Site in Indianapolis, Tuesday, May 3, 2022. The site was the former home of Harrison, the 23rd President of the United States from 1889 to 1893. (AP Photo/Michael Conroy) 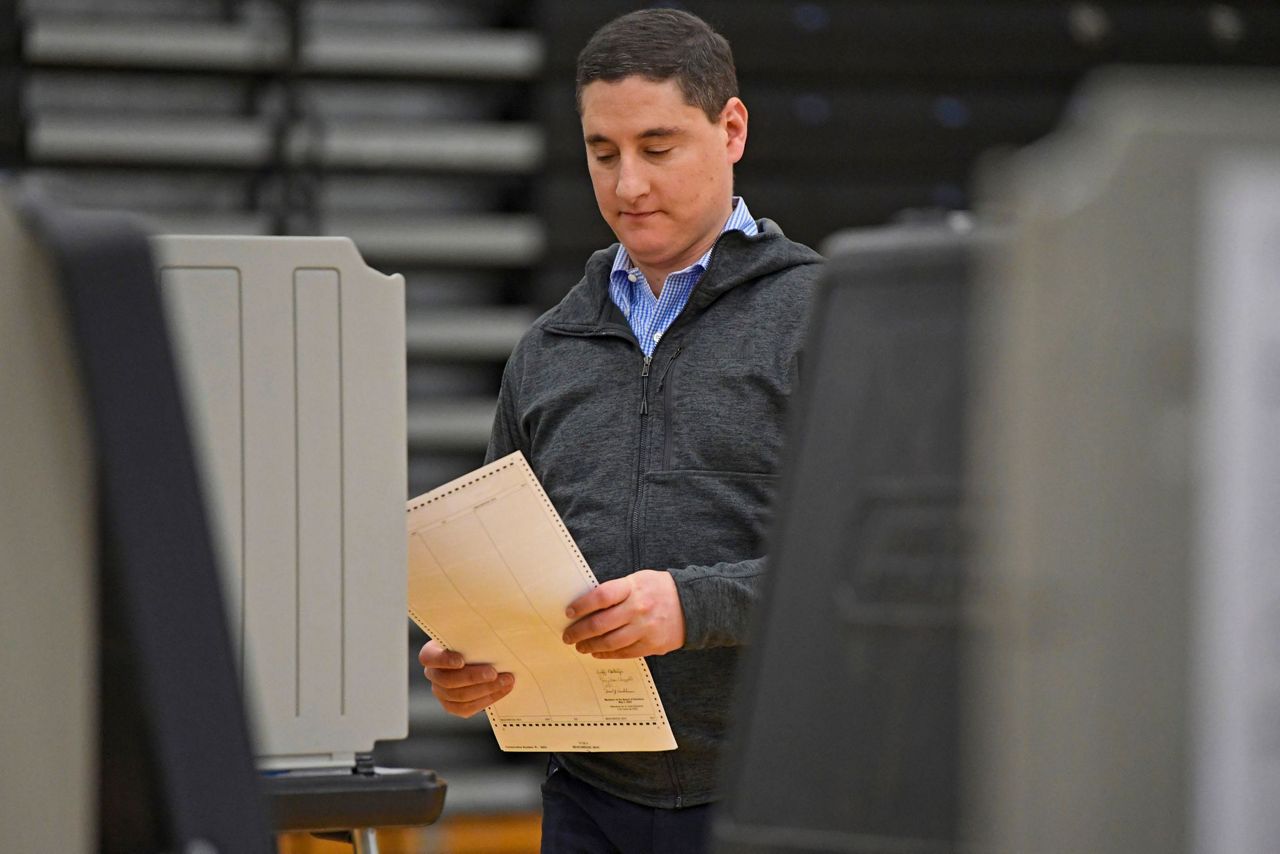 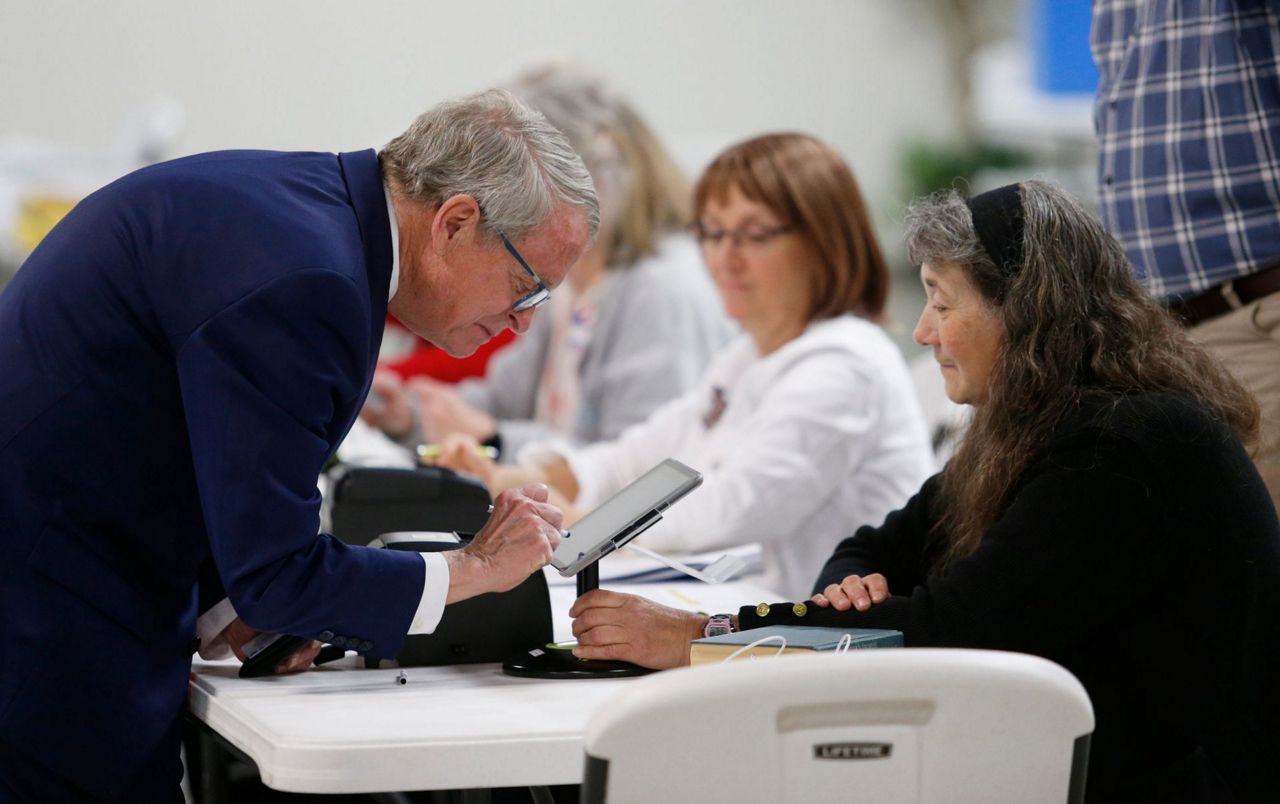 3 of 10
Ohio Gov. Mike DeWine, left, signs for his ballot in front of precinct worker Tonya Veldt as he prepares to vote at his polling place in Cedarville, Ohio, Tuesday, May 3, 2022. (AP Photo/Paul Vernon) 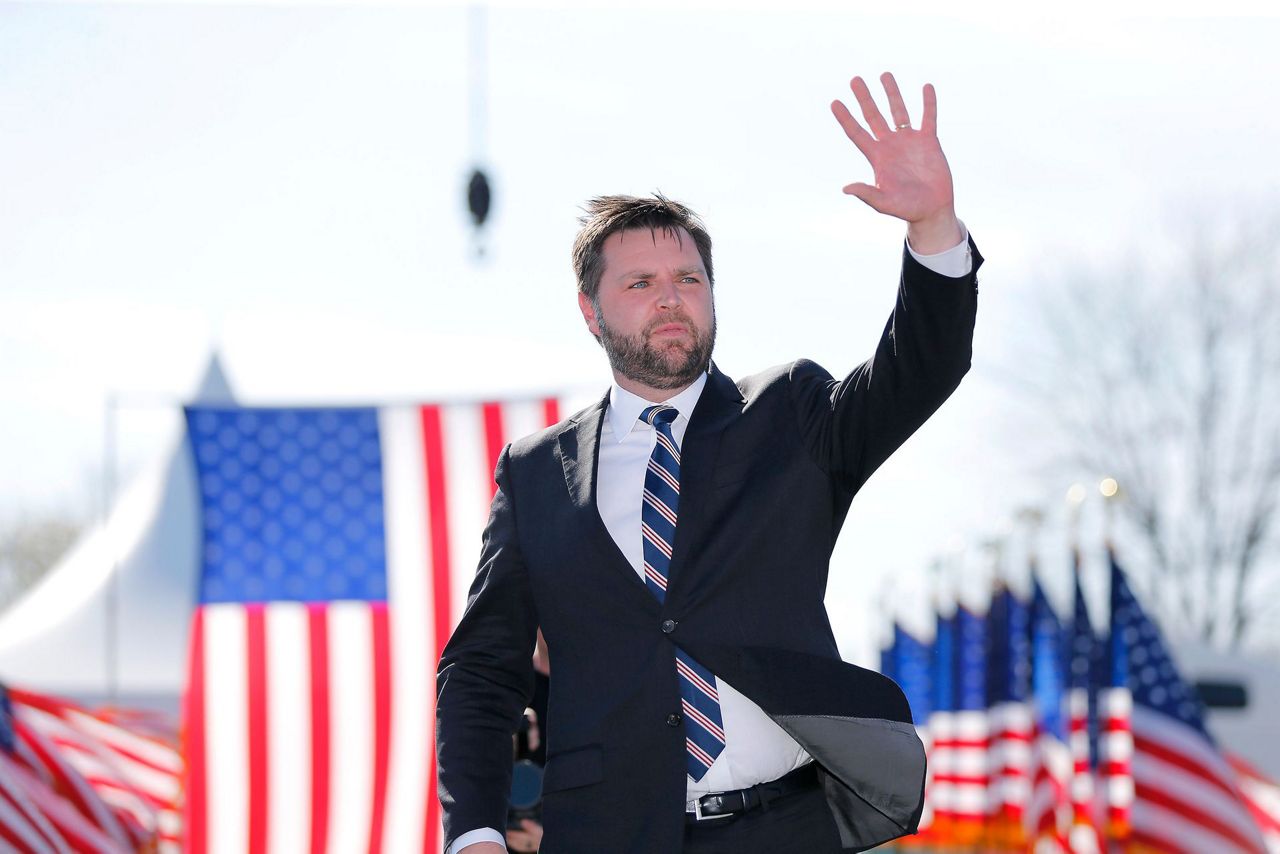 4 of 10
FILE - Republican Senate candidate JD Vance greets supporters at the Save America Rally at the Delaware County Fairgrounds, April 23, 2022, in Delaware, Ohio. High-profile surrogates for Republicans running in Ohio’s hotly contested Senate primary are fanning out across the state or holding other events to give their endorsed candidates a last-minute boost ahead of Tuesday’s election. Sens. Josh Hawley, Ted Cruz and Rand Paul, along with Reps. Matt Gaetz and Marjorie Taylor Greene, were among the conservative emissaries making final pitches in the critical Senate race. (AP Photo/Joe Maiorana) 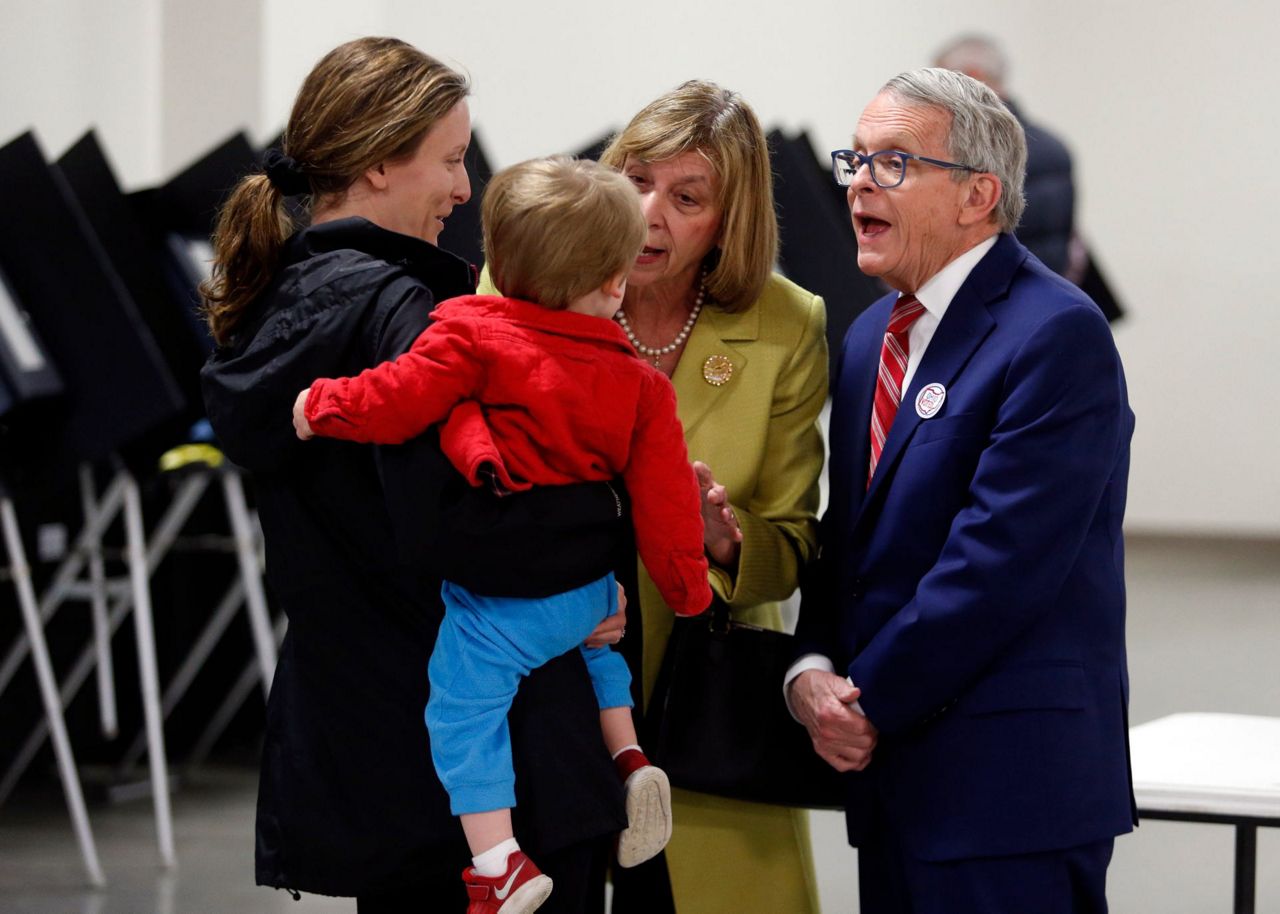 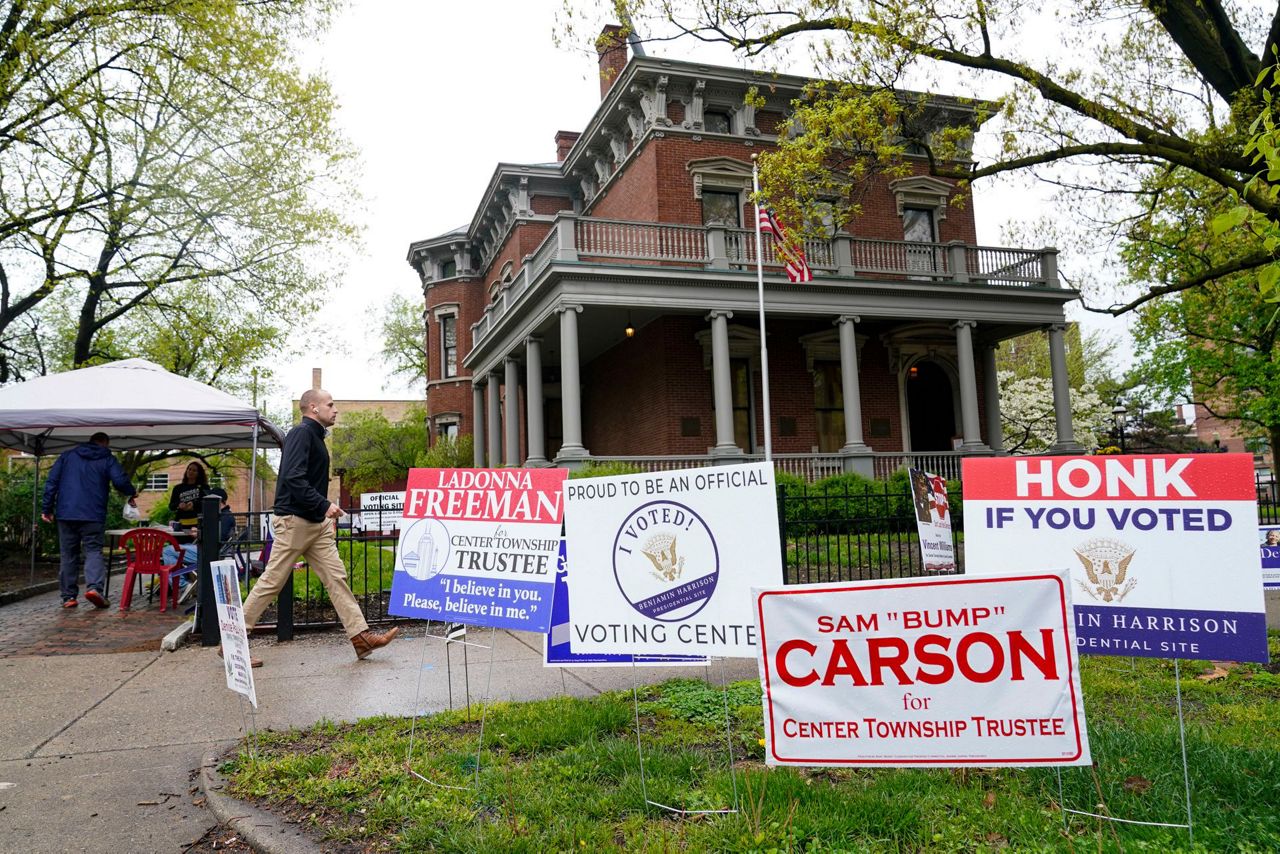 6 of 10
A voter leaves the Benjamin Harrison Presidential Site in Indianapolis, Tuesday, May 3, 2022, after voting in the Indiana primary election. The site was the former home of Harrison, the 23rd President of the United States from 1889 to 1893. (AP Photo/Michael Conroy) 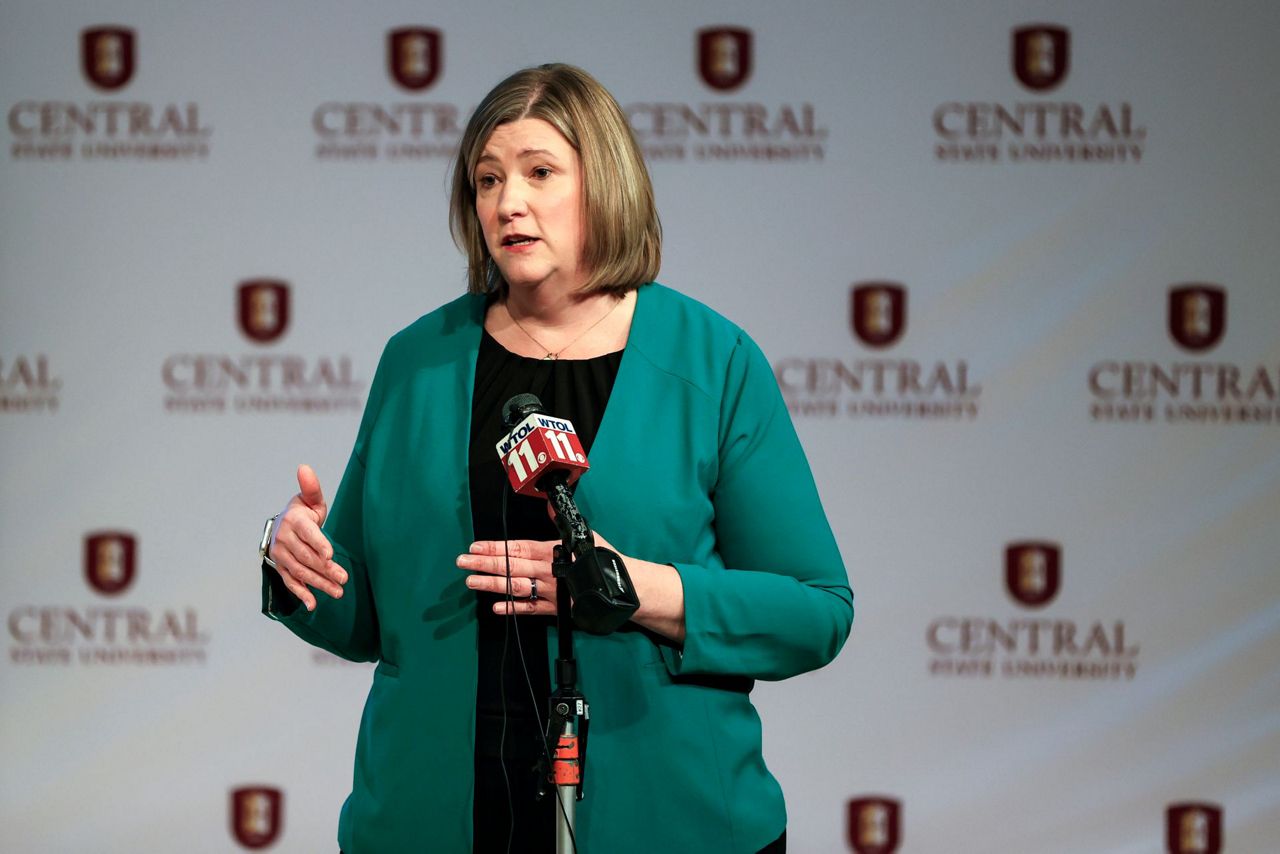 7 of 10
FILE - Nan Whaley, former Mayor of Dayton, running for Ohio governor, speaks to reporters following a debate against John Cranley at Central State University in Wilberforce, Ohio, March 29, 2022. The first multi-state contest of the 2022 midterm election season takes place Tuesday, May 3. Ohio voters will decide governor nominees and one of the most contentious and expensive Republican U.S. Senate primaries in the nation. (AP Photo/Aaron Doster, File) 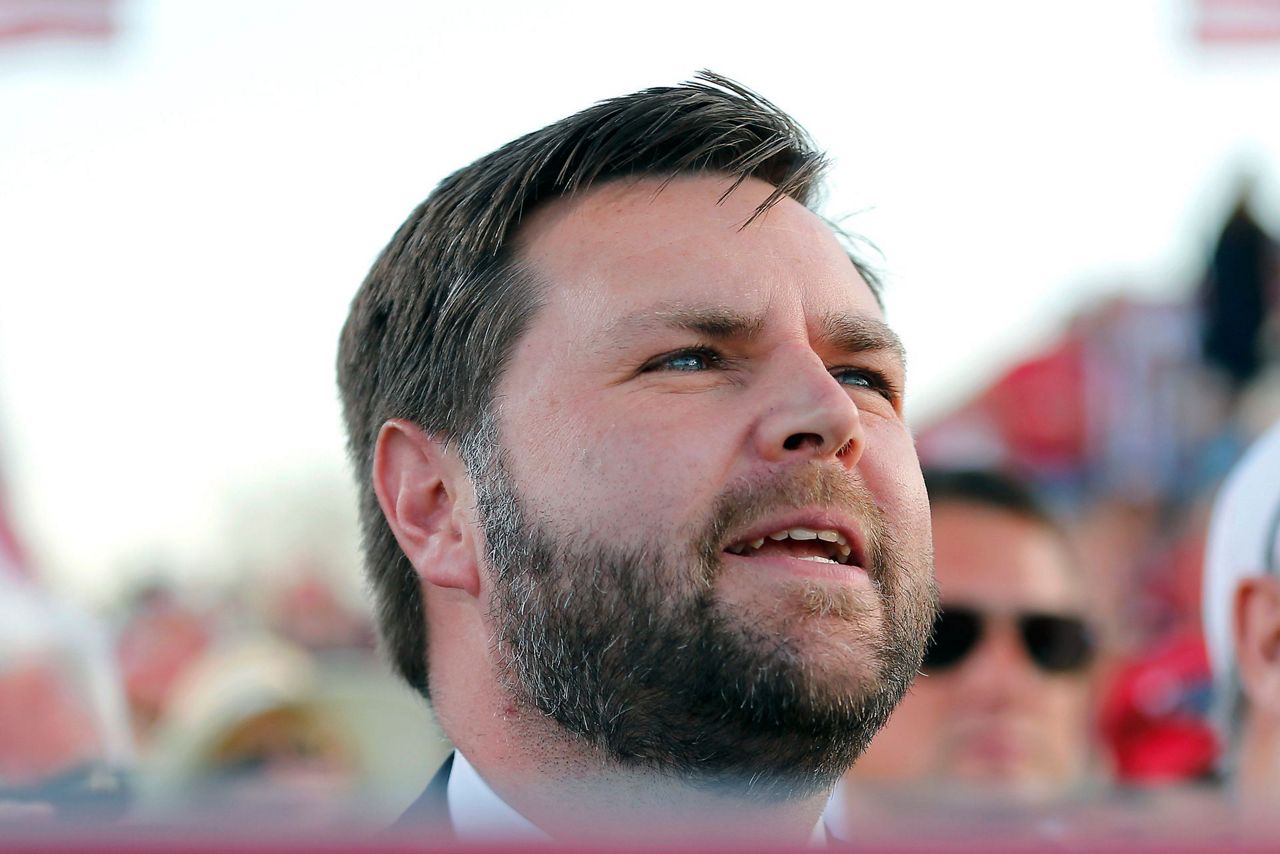 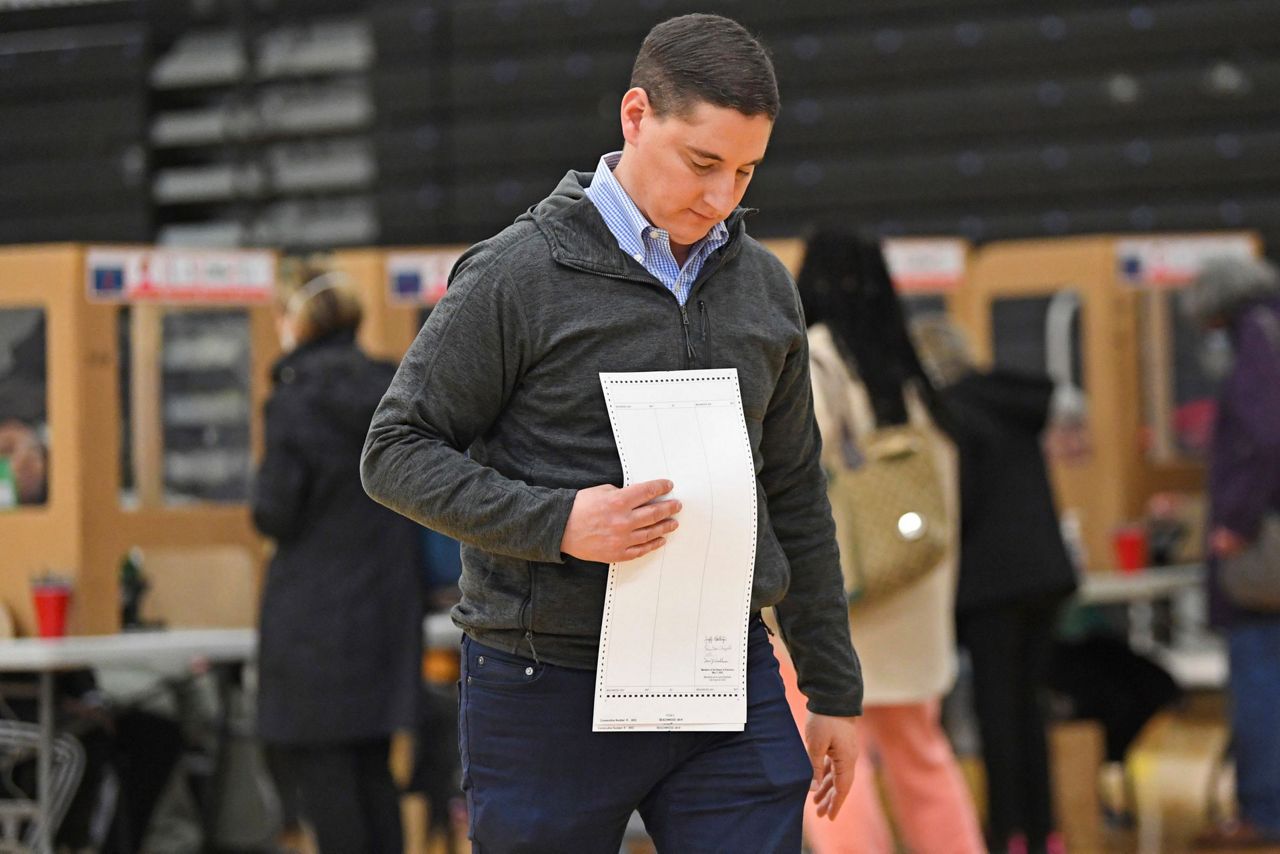 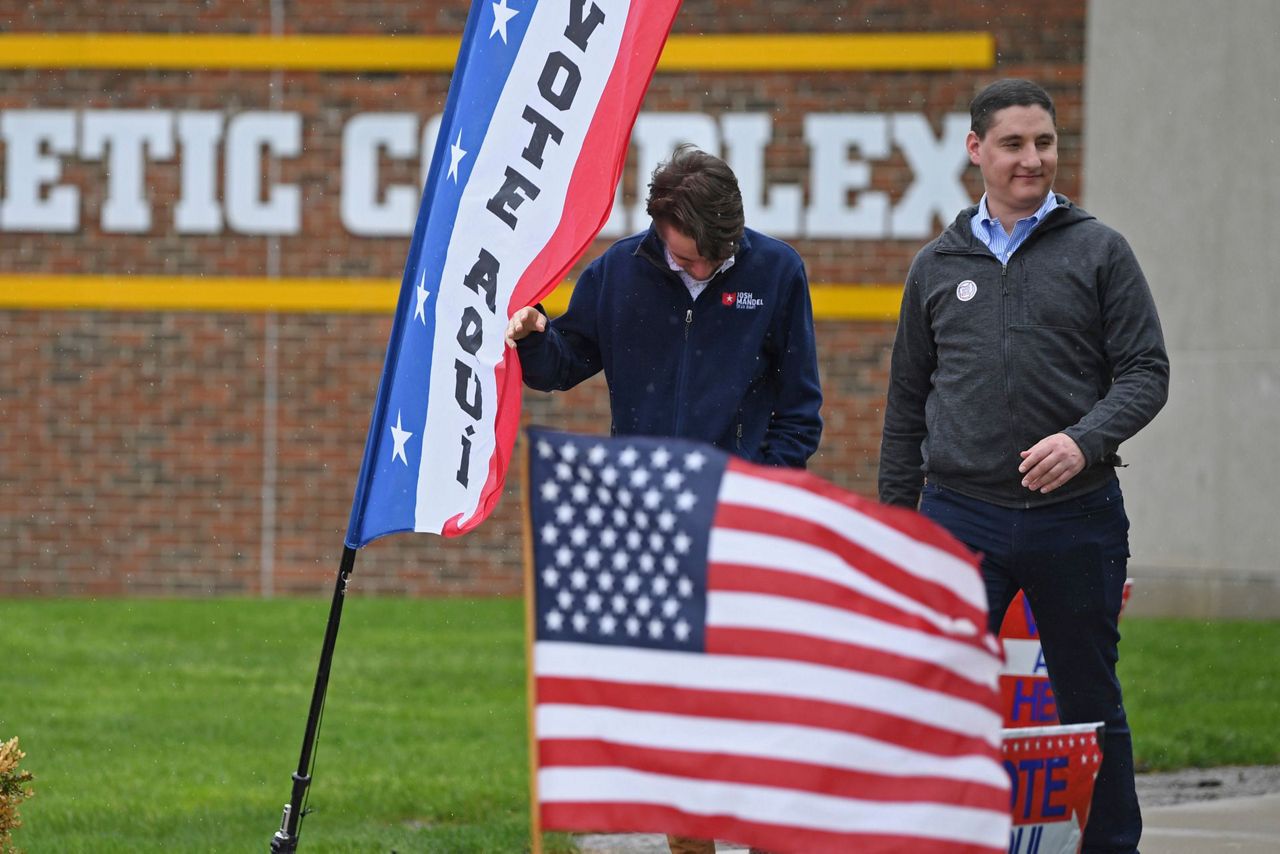 COLUMBUS, Ohio (AP) — Polls have closed in Ohio, ending one of the most contentious and closely watched Senate primaries in the U.S. — one that will offer an early referendum on former President Donald Trump's hold on the GOP as the midterm primary season kicks into high gear.

Author and venture capitalist JD Vance is seen as the frontrunner Tuesday in the Republican race to replace retiring Sen. Rob Portman after receiving Trump’s late-stage support, capping a bitter and expensive contest that, at one point, saw two candidates nearly come to blows on a debate stage. The winner is likely to face 10-term Democratic Rep. Tim Ryan, who has distanced himself from the progressive wing of his party ahead of what is expected to be a difficult year for Democrats seeking to hold their congressional majorities.

Incumbent Republican Gov. Mike DeWine appears on track to secure his party’s nomination for another term, despite backlash from conservatives over COVID-19 shutdowns and mandates. Meanwhile, in Indiana, more than a dozen state House members are trying to hold off Republican primary challengers who want to push the Legislature further to the right.

Tuesday marks the first multistate contest of the 2022 campaign and comes the day after the leak of a draft U.S. Supreme Court opinion that suggests the court could be poised to overturn the 1973 landmark Roe v. Wade decision that legalized abortion nationwide. Such a decision could have a dramatic impact on the course of the midterms, when control of Congress, governors' mansions and key elections offices are at stake.

The primaries also serve as a clarifying test of Trump’s influence in his party. A Vance victory will likely embolden Trump to keep asserting himself in primary campaigns ahead of another potential presidential run. A setback, however, would raise questions about whether GOP voters are seeking a new direction, especially in a state he won twice by margins of 8 percentage points.

At the Strongsville library in suburban Cleveland, 84-year-old George Clark said he voted for Vance based on Trump's endorsement.

But Joanne Mondak, 71, said she voted for state Sen. Matt Dolan, the only major candidate who did not aggressively court Trump. The rest of the field, she said, are “nutcakes" who are “too much Trump."

Trump reminded Ohio voters Tuesday his stake in the race.

Calling into a Columbus radio show, Trump praised all the candidates seeking the GOP nomination, but said he chose to endorse Vance despite his past Trump criticism because he believes he is best positioned to win the seat in November.

Vance had been trailing in the polls until the former president backed the “Hillbilly Elegy” author and one-time Trump critic in a contest that revolved largely around him. While the timing of Trump’s endorsement — less than three weeks before Election Day and as early voting was already underway — may have dulled its impact, it was a major blow to former Ohio Treasurer Josh Mandel, Cleveland investment banker Mike Gibbons and former Ohio Republican Party Chair Jane Timken, who had all gone to elaborate lengths to court Trump and his voters.

The race will also go down as the most expensive in state history, with more than $66 million in TV and radio spending alone, according to the Columbus-based Medium Buying firm.

Ohio, once a bellwether state, is now decidedly Republican, posing a challenge for Ryan, who is heavily favored to win his three-way Democratic primary against progressive Morgan Harper, a former consumer protection attorney, and Columbus activist and tech exec Traci Johnson. The longtime congressman and 2020 presidential candidate has fashioned himself as a blue-collar crusader fighting for working families as he has campaigned dressed in sweatshirts and baseball caps.

While DeWine is strongly positioned to win a second term, he is expected to face considerable conservative backlash for the aggressive COVID-19 mandates he imposed during the first year of the pandemic.

On the Democratic side, Nan Whaley, the former mayor of Dayton, is vying to become Ohio’s first woman elected governor in her race against ex-Cincinnati Mayor John Cranley. Whaley has the support of U.S. Sen. Sherrod Brown, a popular household name and the state’s top Democrat. Cranley has the backing of feminist icon Gloria Steinem.