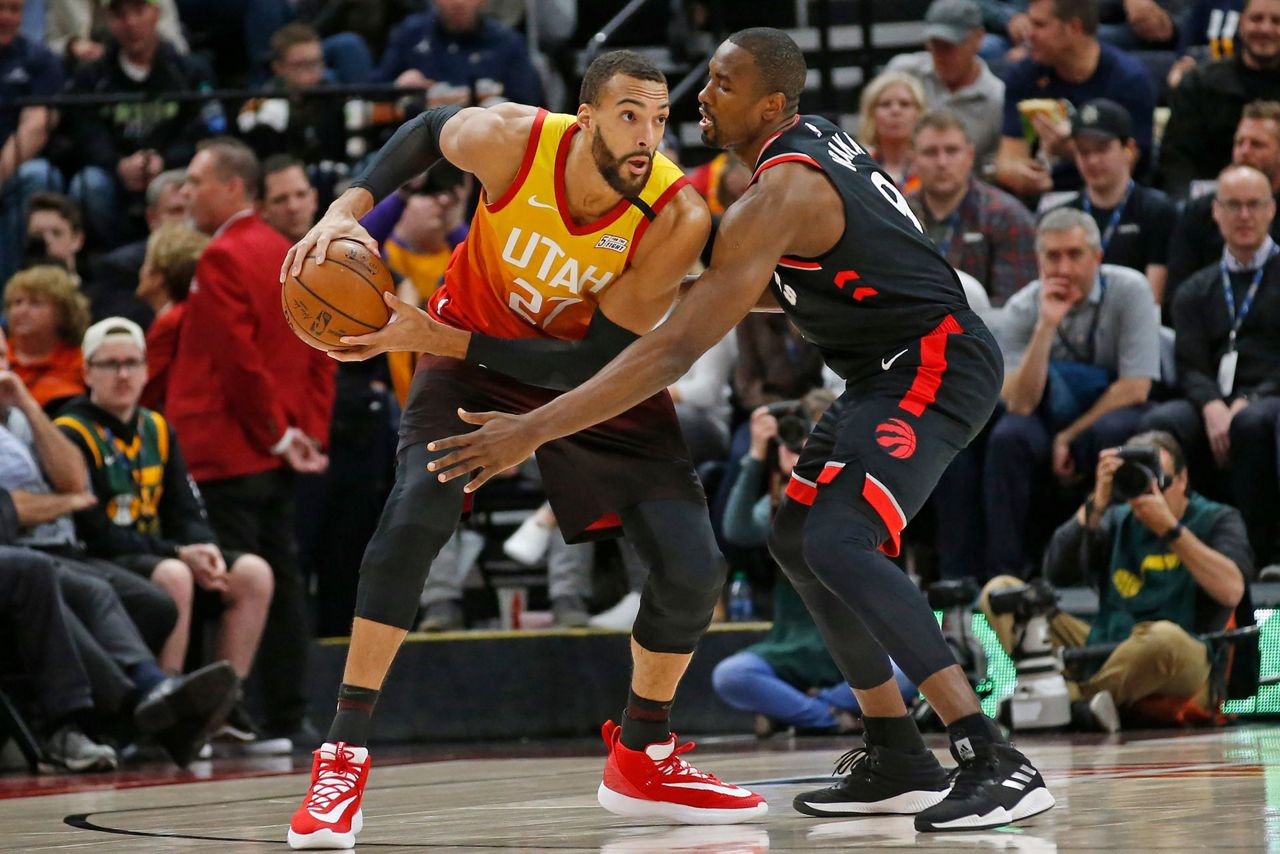 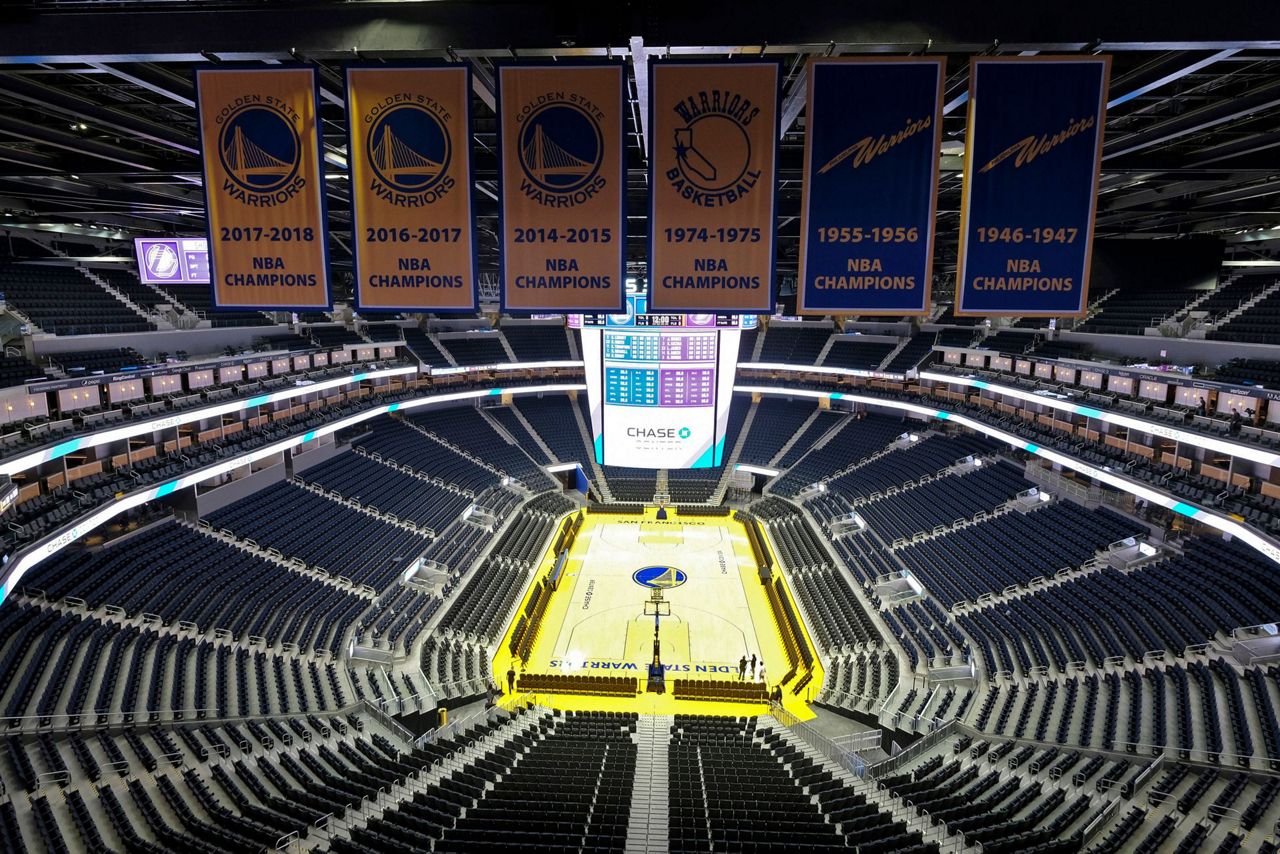 2 of 4
FILE - In this Aug. 26, 2019, file photo, the Golden State Warriors championship banners hang above the seating and basketball court at the Chase Center in San Francisco. The Warriors will play the Brooklyn Nets at home Thursday night, March 12, 2020, in the first NBA game without fans since the outbreak of the coronavirus. (AP Photo/Eric Risberg, File) 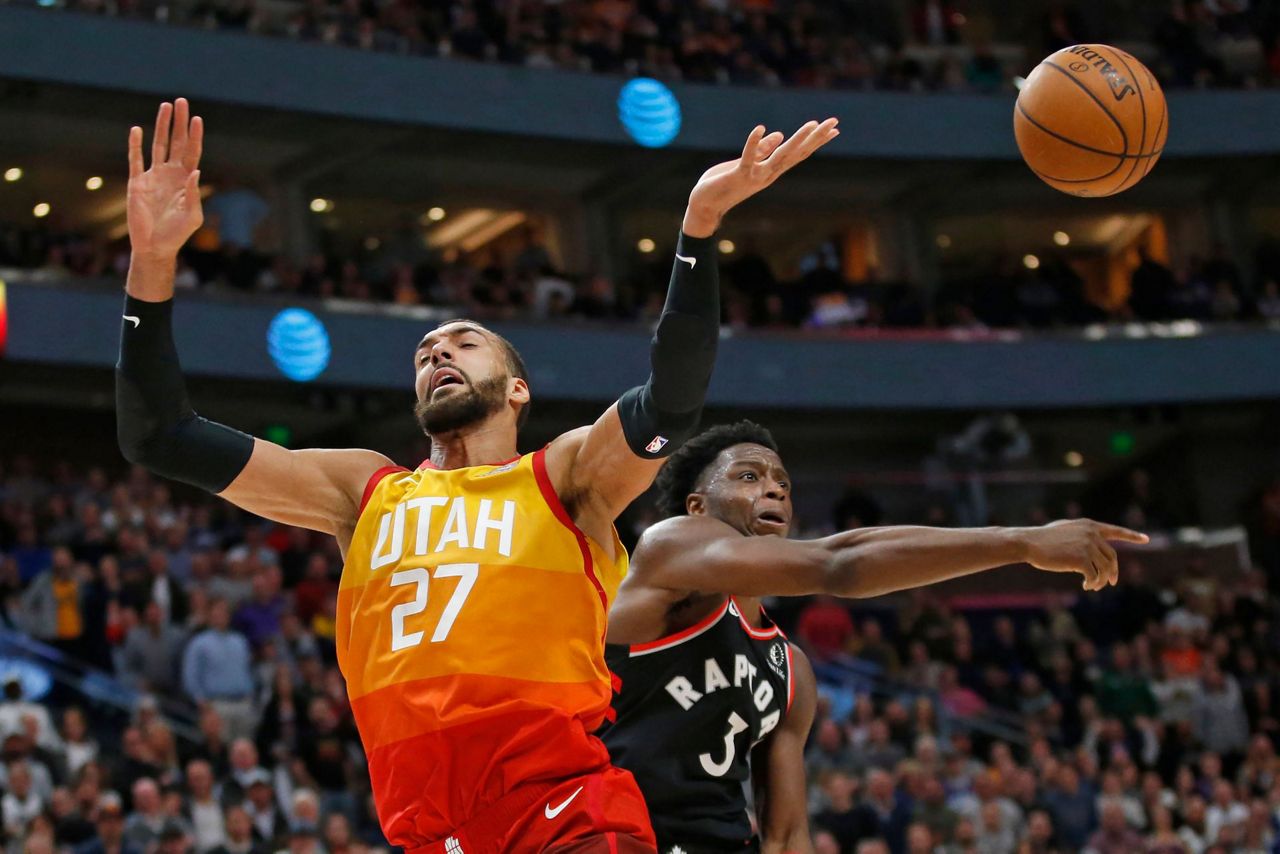 3 of 4
Toronto Raptors forward OG Anunoby (3) knocks the ball from Utah Jazz center Rudy Gobert (27) as he drives to the basket in the second half during an NBA basketball game, Monday, March 9, 2020, in Salt Lake City. (AP Photo/Rick Bowmer) 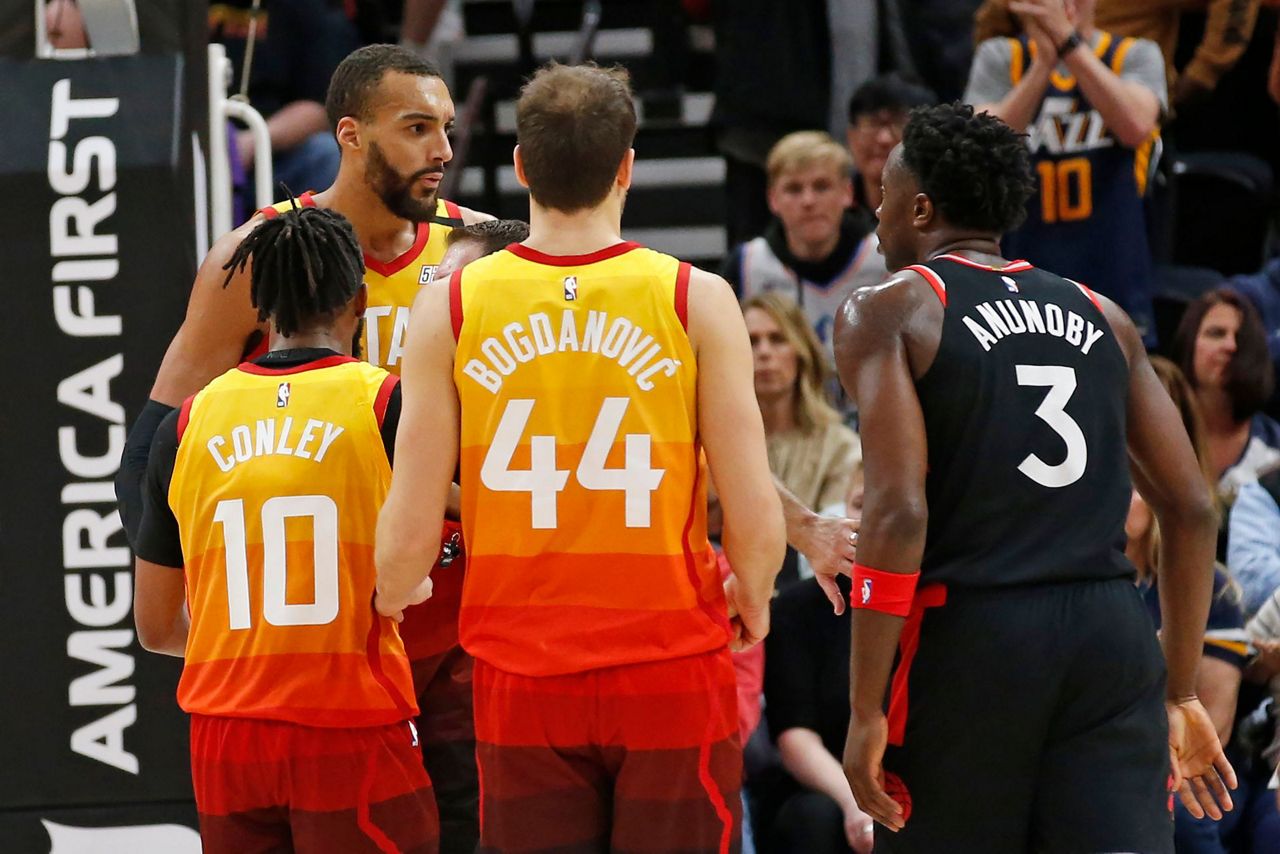 MIAMI (AP) — The NBA has suspended its season “until further notice" after a Utah Jazz player tested positive Wednesday for the coronavirus, a move that came only hours after the majority of the league's owners were leaning toward playing games without fans in arenas.

Now there will be no games at all, at least for the time being. A person with knowledge of the situation said the Jazz player who tested positive was center Rudy Gobert. The person spoke to The Associated Press on condition of anonymity because neither the league nor the team confirmed the test.

“The NBA is suspending game play following the conclusion of tonight’s schedule of games until further notice,” the league said in a statement sent shortly after 9:30 p.m. EDT. “The NBA will use this hiatus to determine next steps for moving forward in regard to the coronavirus pandemic.”

The test result, the NBA said, was reported shortly before the scheduled tip-off time for the Utah at Oklahoma City game on Wednesday night was called off. Players were on the floor for warmups and tip-off was moments away when they were told to return to their locker rooms. About 30 minutes later, fans were told the game was postponed “due to unforeseen circumstances."

Those circumstances were the league’s worst-case scenario for now — a player testing positive. A second person who spoke to AP on condition of anonymity said the league expects the shutdown to last a minimum of two weeks, but cautioned that timeframe is very fluid.

“It's a very serious time right now," Miami Heat coach Erik Spoelstra said. “I think the league moved appropriately and prudently and we'll all just have to monitor the situation and see where it goes from here."

The Jazz released a statement saying a player — they did not identify Gobert — tested negative earlier Wednesday for flu, strep throat and an upper respiratory infection. That player's symptoms diminished as the day went along, but the decision was made to test for COVID-19 anyway. That test came back with a preliminary positive result.

“The individual is currently in the care of health officials in Oklahoma City," the Jazz said, adding that updates would come as appropriate.

For most people, the coronavirus causes only mild or moderate symptoms, such as fever and cough. For some, especially older adults and people with existing health problems, it can cause more severe illness, including pneumonia.

The vast majority of people recover from the new virus. According to the World Health Organization, which declared a pandemic on Wednesday, people with mild illness recover in about two weeks, while those with more severe illness may take three to six weeks to recover. In mainland China, where the virus first exploded, more than 80,000 people have been diagnosed and more than 58,000 have so far recovered.

It has been a worldwide issue for several weeks. And now, it has hit the NBA.

“This is crazy," Cleveland forward Tristan Thompson said on Twitter.

Rapidly evolving times, as well. Around 7 p.m., a person with knowledge of the situation told AP that owners — who met by teleconference Wednesday — were largely in support of a plan to play games in empty arenas on a short-term basis.

About an hour later, the Thunder-Jazz game was halted before tip-off. And about 90 minutes after that, the season was called off, effective when the last whistle was to blow Wednesday night.

That came even earlier than planned: The last game of the night's six-game slate, New Orleans at Sacramento, was called off as well because one of the referees assigned to work that Pelicans-Kings game, Courtney Kirkland, worked a Utah game on Monday.

“The game was canceled out of an abundance of caution," the NBA said.

There are 259 games, roughly 21% of the schedule, left to play this season — and no one knows if, or when, things will resume.

“We believe in the leadership of the league,” Philadelphia 76ers general manager Elton Brand said.

The shutdown is the latest major development in a season filled with unspeakably hard challenges. The league lost as much as $400 million in revenue after a rift with China was started in October when Houston general manager Daryl Morey tweeted out support of anti-government protesters in Hong Kong. Former NBA Commissioner David Stern died in January, the same month that soon-to-be Hall of Famer Kobe Bryant died in a helicopter crash.

And now, a pandemic — which could also cost the league hundreds of millions in lost revenue, depending on how long it lasts.

“As we’ve said from the beginning, the health and safety of our fans, employees, players and partners is our top priority and thus we fully support the NBA’s decision to postpone games," Orlando Magic CEO Alex Martins said. “We will continue to stay in contact with the league, and local, state and federal health experts as we closely monitor this public health crisis."

The NBA’s movement toward empty arenas in the short term came on the same day that the NCAA announced that the men’s and women’s Division I tournaments would be played without fans — except for a few family members — permitted inside to watch.

“People are clearly taking the measures that they feel they need to take for safety,” said Heat guard Duncan Robinson, who played in both the Division I and Division III national championship games during his college days at Michigan and Williams.

Robinson added, “but at the same time the NBA has to protect its players in the league and the fans.”

Things were trending toward games in empty arenas for some time, and it was abundantly clear Wednesday morning when the director of the National Institute of Allergy and Infectious Diseases told a Congressional committee that he would recommend the NBA not allow fans at games in response to the coronavirus.

Dr. Anthony Fauci was responding to a question asked by Rep. Glenn Grothman, a Wisconsin Republican, “is the NBA underreacting or is the Ivy League overreacting?” Grothman was referencing how the Ivy League recently canceled its basketball tournaments, instead of having them without fans or keeping the status quo.

“We would recommend that there not be large crowds,” Fauci said. “If that means not having any people in the audience when the NBA plays, so be it. But as a public health official, anything that has crowds is something that would give a risk to spread.”

That was when the concern was about crowds and containment.

By the close of business Wednesday in the NBA, the concern was so much more.

“This is surreal,” Borrego said. “This is reality for us now. It's no longer just on TV somewhere. This is now home."