Every hurricane season, we see tropical systems become a Category 1, Category 2, Category 3, and so on. What does this mean, exactly?

These categories are from the Saffir-Simpson Scale. It’s a classification system for hurricanes that is based on wind speed, and they can help predict possible outcomes for cities that are in the path of a tropical system.

Let’s break down these categories to get a better understanding of what each one means. 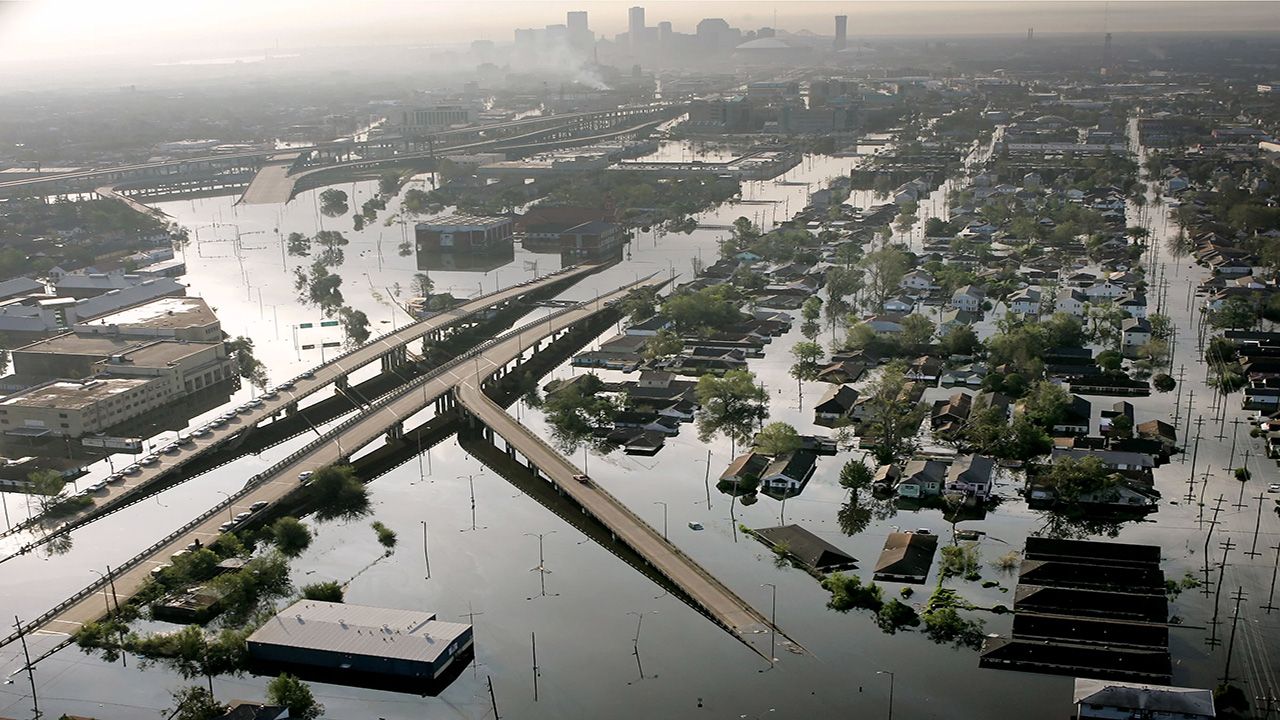 The first on our list is Category 1. These hurricanes can produce winds from 74 to 95 mph.

With a Category 1 hurricane, very dangerous winds are expected. Roofs, shingles, and gutters of well-constructed homes could be damaged.

Branches of trees could snap, power lines could be damaged which, in turn, would lead to power outages.

Even though this is first on our list, a Category 1 hurricane should not be taken lightly. In 2005, Hurricane Katrina made landfall as a Category 1 and produced $125 billion dollars in damage. Much of the gulf coast of Louisiana and Mississippi was destroyed and took years for them to recover. 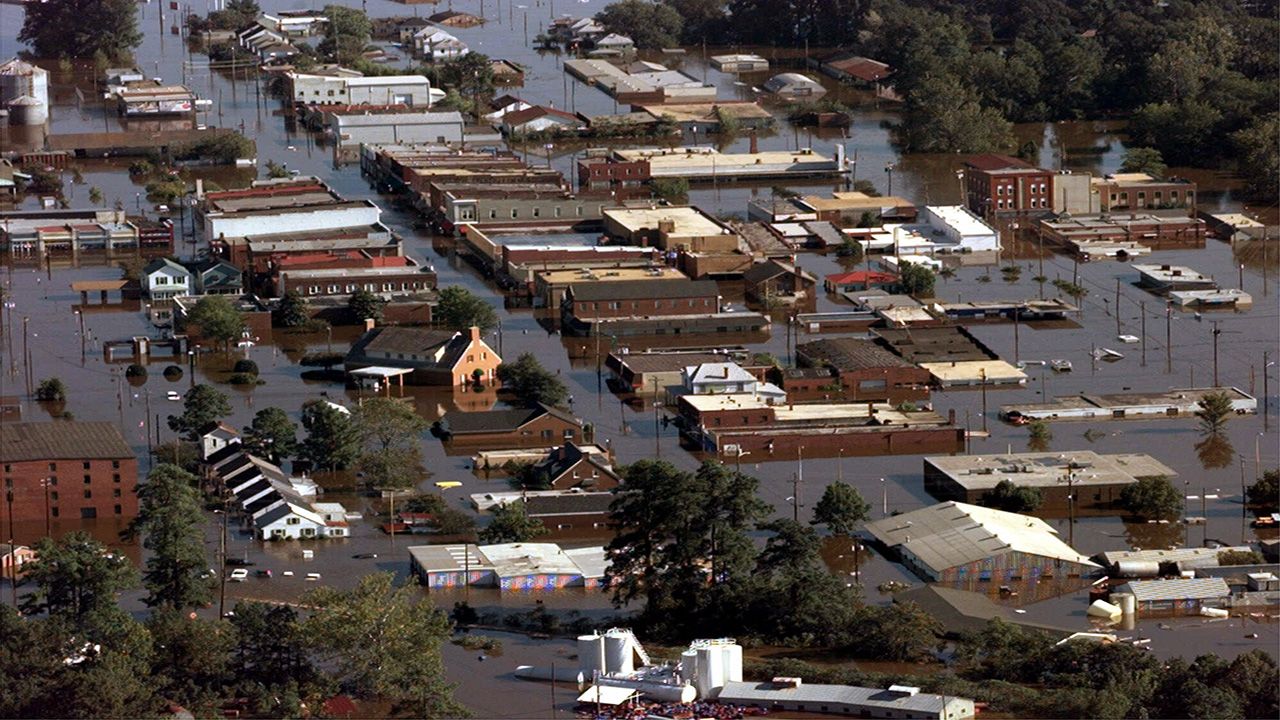 Next on our list is Category 2. Hurricanes in the Category 2 range produce winds from 96 to 110 mph.

These winds are extremely dangerous. Well-constructed homes can receive major roof and siding damage. Shallow rooted trees can snap or be uprooted.

Power outages are expected and could last several days to weeks.

In 1999, Hurricane Floyd brought devastating impacts to the North Carolina coast when it made landfall near Cape Fear as a Category 2.

Floyd was mostly remembered for its rainfall with totals reaching 10 to 24 inches for much of eastern North and South Carolina. Flooding became a major problem, claiming many lives and homes. Harmful chemicals, sewage, and animal waste also contaminated rivers due to flooding. 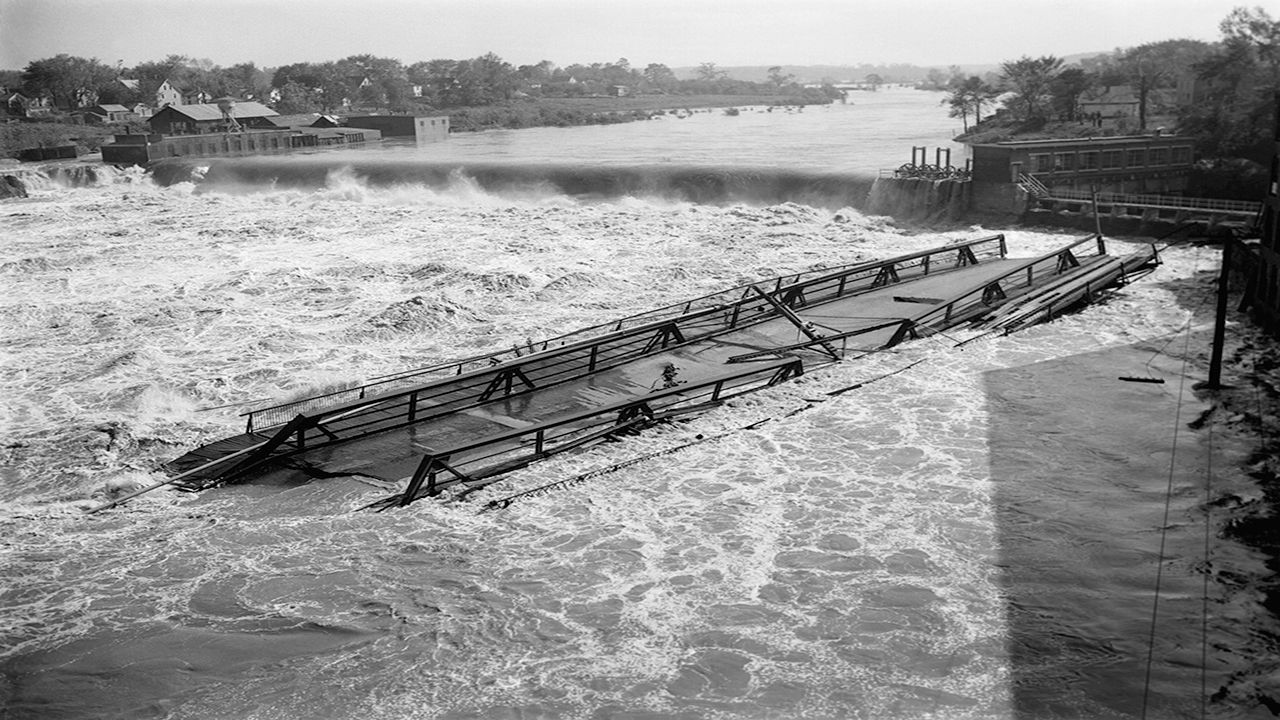 The Chicopee Falls Bridge over the Connecticut River is pushed downstream due to flooding from the Great New England Hurricane.

Hurricanes classified as Category 3 will produce winds from 111 to 129 mph.

Any system rated Category 3 or above is considered a major hurricane. Expect devastating damage from these powerful hurricanes.

Well-constructed homes will sustain major damage to roofs and sidings. Many trees could be snapped and uprooted. Expect roads to be blocked and traveling to be limited.

Electricity and water could be scarce for several days or weeks.

An example of a Category 3 would be the Great New England Hurricane of 1938 which made landfall on Long Island.

Storm tide reached close to 17 feet for some areas, destroying many homes. Montauk was temporarily made into an Island.

Further inland, the hurricane made a second landfall as a Category 3 between Bridgeport and New Haven. Here, hundreds of lives were lost with many more injured. 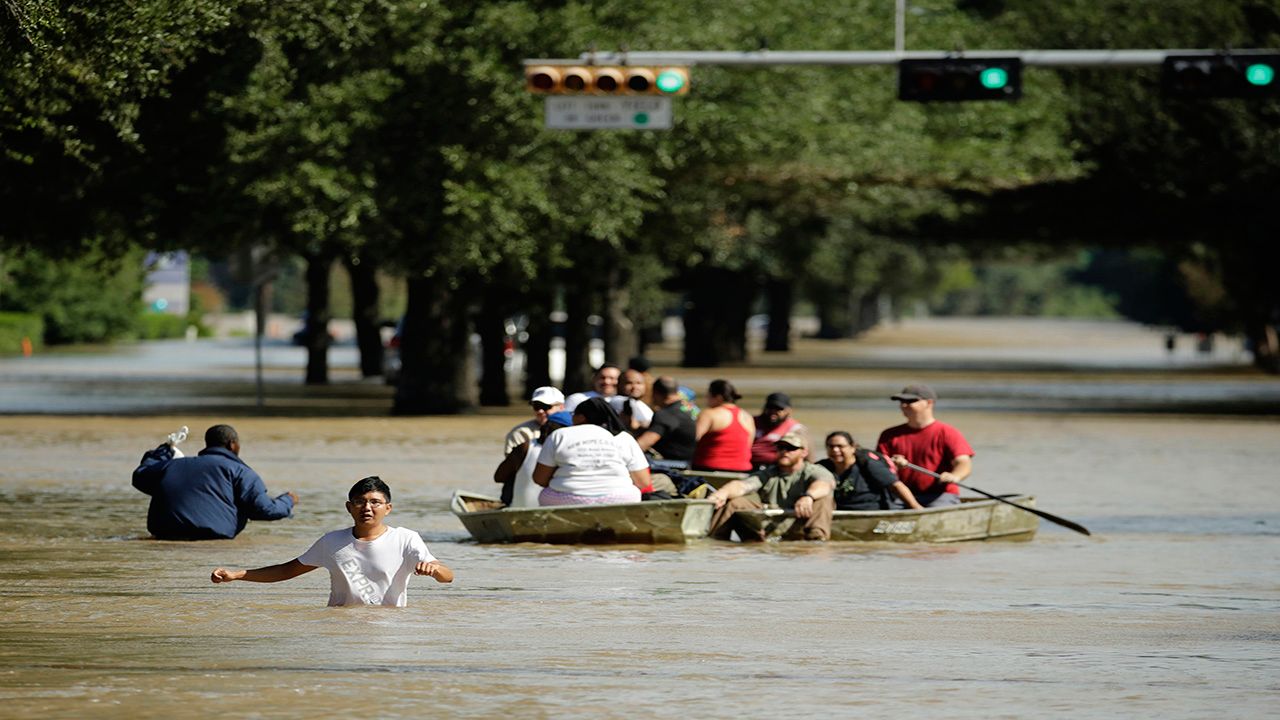 Next is a Category 4. These major hurricanes will produce winds from 130 to 156 mph.

Well-constructed homes will have severe damage with the loss of roofs and exterior walls.

Power poles and trees will be knocked down and could isolate many residential areas. Power outages could last weeks or months.

Most of the area will be uninhabitable for weeks or months.

In 2017, Hurricane Harvey made landfall along the Texas coast as a Category 4 where Harvey stalled out for days. Harvey brought torrential rainfall, and produced devastating flooding.

The storm surge across the coast reached more than 12 feet above sea level. Many homes were destroyed and tens of thousands of people had to be rescued. 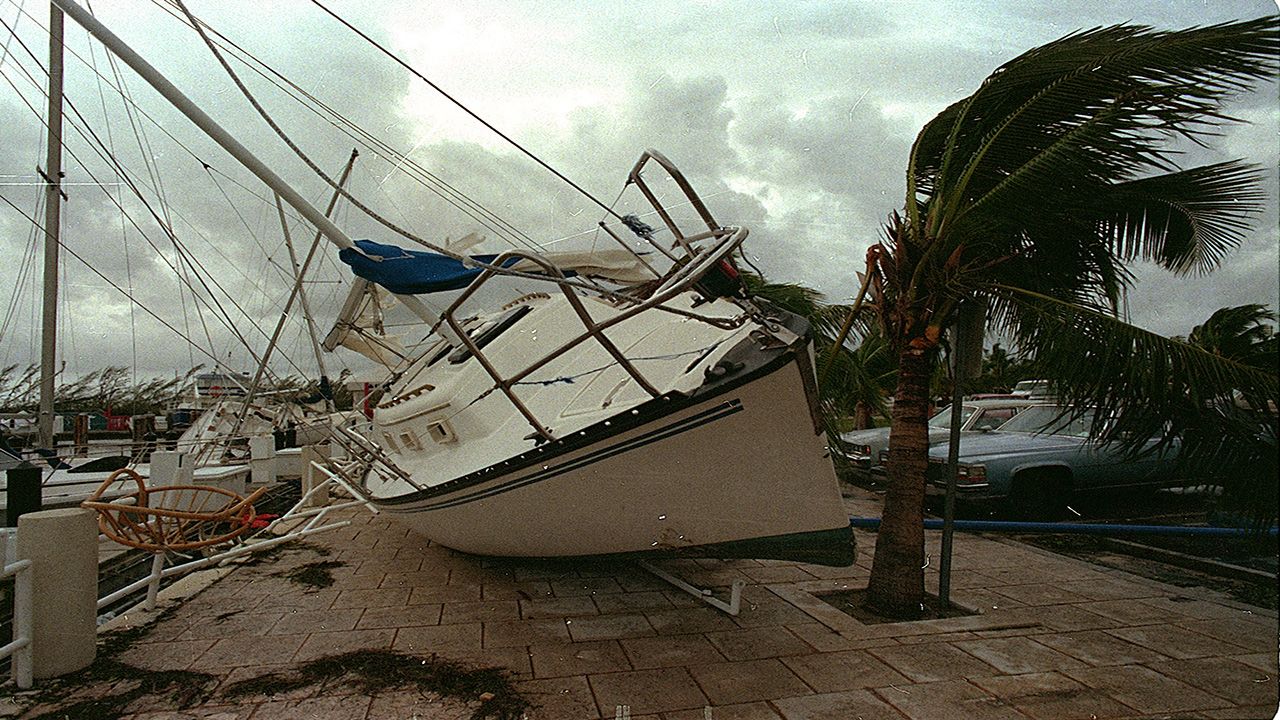 A boat is washed ashore in Miami by Hurricane Andrew.

A Category 5 hurricane comes in as the strongest on our list with winds reaching 157 mph or higher.

A high amount of framed homes will be destroyed with roofs completely gone and walls collapsed.

Many trees and power poles will be knocked down, isolating many residential areas. Power outages could last weeks for months.

Most of the area will be uninhabitable for weeks or months.

In 1992, Hurricane Andrew made landfall as a Category 5 in south Florida where its winds proved to be the main cause of destruction.

Neighborhoods were flattened and thousands of homes lost roofs.

Andrew caused over $27 billion in damage. It was this storm that prompted better home construction practices to be put into place. 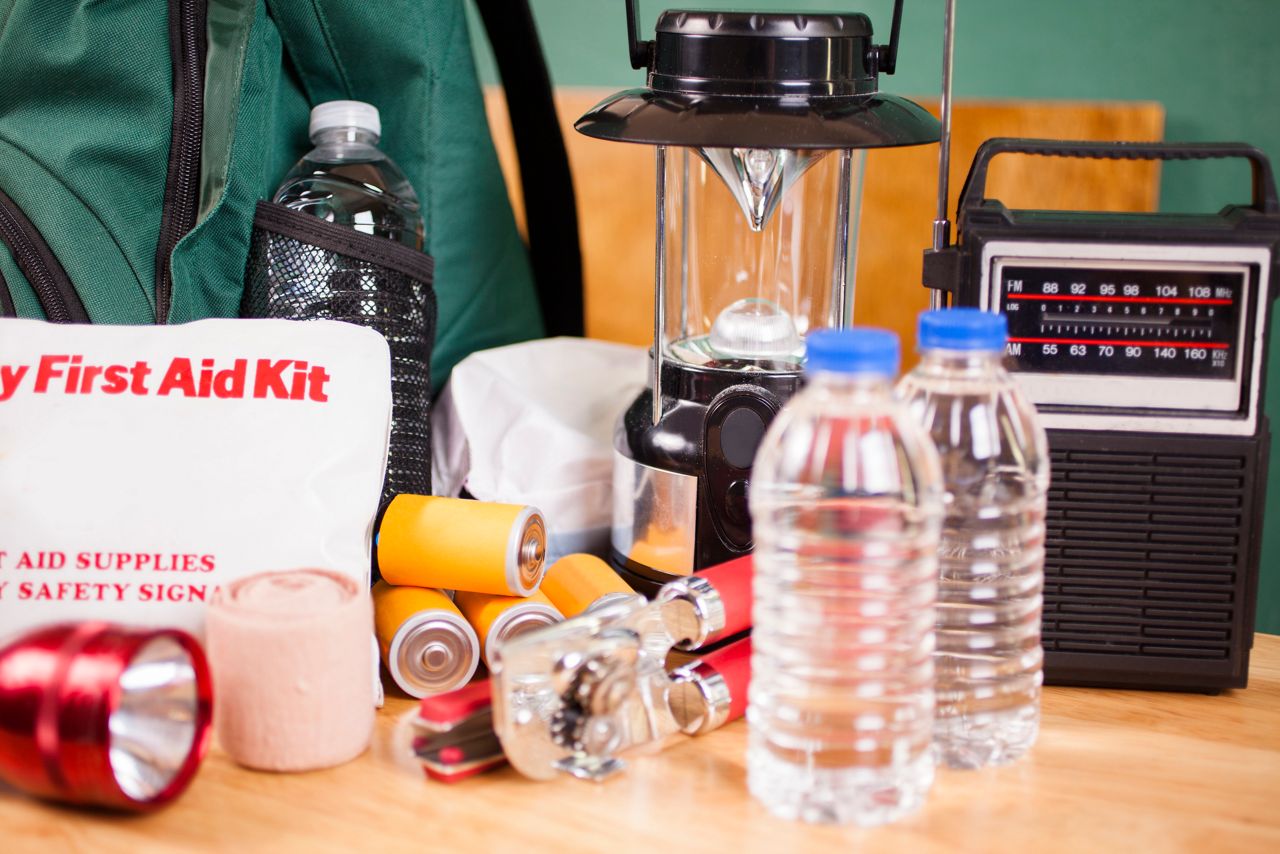 Items needed for a preparedness kit.

On top of strong winds, rain, and flooding, hurricanes can bring in many more impacts. Severe weather is a huge concern with hurricanes. Many tornadoes are often spotted within these tropical systems as they make their way on land.

Waterspouts and rips currents can also be big threats with hurricanes.