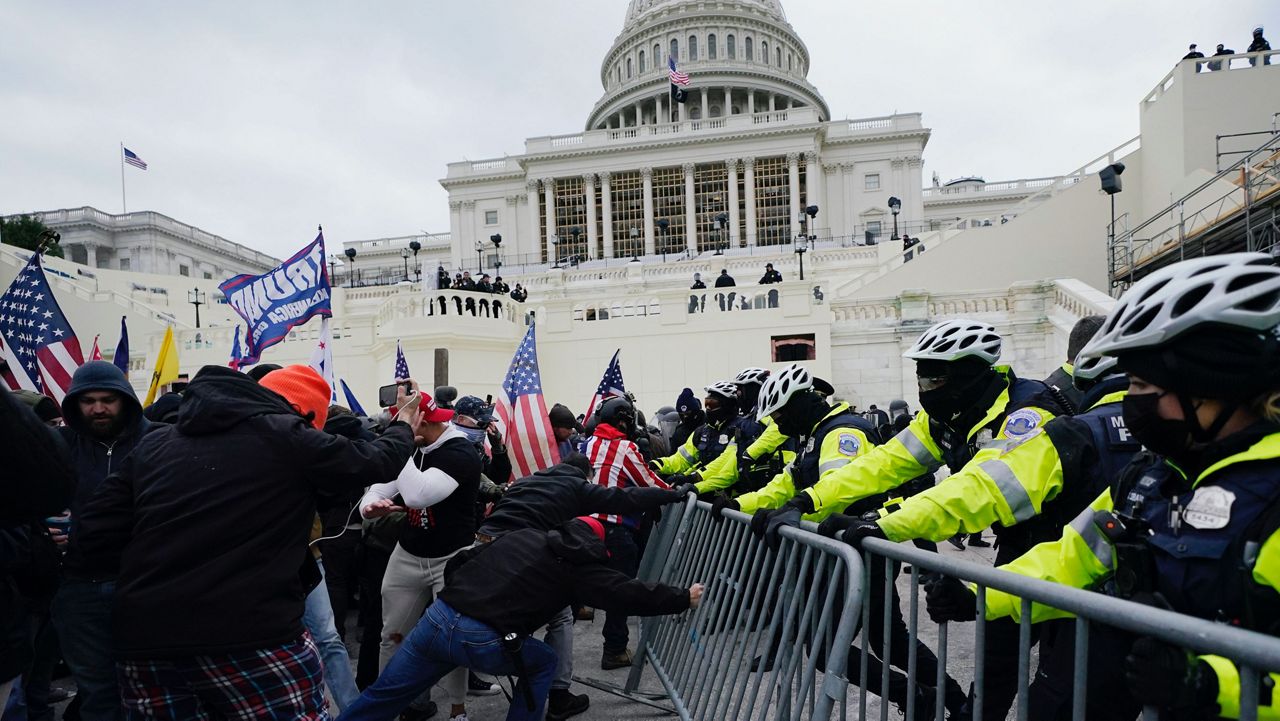 Trump supporters and police outside the Capitol on Jan. 6, 2021. (AP Photo, File)

Jan. 6 committee begins to share findings, but can it change minds?

Seventeen months after a mob of Trump supporters stormed the U.S. Capitol, a House committee will begin telling the story, based on a nearly yearlong investigation, of the Jan. 6, 2021, insurrection and the events that led up to it.


The panel of seven Democrats and two Republicans will hold the first of a series of televised hearings Thursday night.

Committee members say the goal of the hearings is to explain to the American people exactly what happened — both in the images they watched live on television as well as behind the scenes.

On Jan. 6, supporters of then-President Donald Trump clashed with police and stormed the Capitol, disrupting Congress as it met to certify Joe Biden’s election victory. Five people died at the scene or in the hours after, and more than 140 police officers were assaulted. Lawmakers were rushed to secure locations as rioters breached the building.

More than 840 people have been arrested in connection with the riot. Over 250 individuals have been charged with assaulting or impeding law enforcement, about 90 of them are accused of using deadly or dangerous weapons or causing serious bodily harm to an officer.

Over 300 suspects have pleaded guilty.

Just before the attack, Trump delivered a speech at a rally near the White House in which he continued to promote false claims about widespread fraud in the election, told the crowd, “If you don't fight like hell, you're not going to have a country anymore” and called on them to march to the Capitol.

The House impeached Trump a week later for inciting an insurrection, but the Senate acquitted him.

During its investigation, the Jan. 6 committee issued more than 100 subpoenas, interviewed over 1,000 people and collected more than 140,000 documents.

“We just have an absolute mountain of evidence about what took place,” Rep. Jamie Raskin, D-Md., one of the committee members, told The Washington Post this week.

Some of the information will be new to the public, panel members say.

The hearings are expected to last until late June, and then the committee will release a report detailing its findings and recommending legislative reforms to prevent a repeat of Jan. 6.

The first hearing — which will focus on the role of far-right extremists — begins at 8 p.m. Eastern on Thursday and will be televised on most major networks, with the notable exception of the Fox News Channel.

A significant challenge for the panel is presenting a thorough enough accounting of the insurrection while limiting the evidence to a digestible amount for the public. The committee has enlisted former ABC News President James Goldston to help produce the hearings, according to Axios.

“I think one of the goals that the committee has for the hearings is to present a coherent narrative to the public from the information they already have, even if that record is not quite as complete as they would like,” said Molly Reynolds, a senior fellow of governance studies at the Brookings Institution.

The panel announced Tuesday that Capitol Police Officer Caroline Edwards and British filmmaker Nick Quested will testify at the first hearing. Edwards was among the first officers injured trying to hold back the mob at the Capitol. Quested recorded the Proud Boys, a violent far-right group whose members have been charged with seditious conspiracy, as they stormed the building as well as some of their planning before the attack.

Among the topics the hearings are expected to address are whether the assault on the Capitol was planned, why security officials weren’t better prepared for the violence and how Trump and his allies allegedly worked to try to overturn the 2020 presidential election, including plots to pressure officials, including then-Vice President Mike Pence, and use fake electors. The final hearing will focus on Trump’s role, The New York Times reported.

“We think that there is overwhelming evidence of this plan to overturn the 2020 presidential election in coordination with a violent assault on our body,” Raskin said. “So we're going to lay it all out there.”

Peter Feaver, a political science professor at Duke University, said he believes the committee is trying to “break through the public apathy and settled judgments about Jan. 6.”

Political pundits say the committee, regardless of what it presents, will face an uphill battle in changing the minds of many Americans.

“I think there is a divide in this country, and people are not crossing,” said Alan Chartock, a political scientist and radio host at WAMC in Albany, New York.

Feaver agreed that staunch conservatives and liberals are unlikely to be swayed during the hearings but said the committee believes it might be able to reach “folks in the middle who say, ‘Yeah, it was pretty horrible, but I’m ready to move on.’”

“They're hoping that they can capture their attention and their imagination and shift them into believing that something more seriously bad happened,” he said.

Feaver also said it’ll be interesting to see if the committee is able to unearth any revelations that can shock an otherwise desensitized nation.

“One of the things that President Trump did over five years is sort of numb the conscience by continually doing stuff that would be shocking if anyone else did it, and then over time, people say, ‘Ah, that’s just Trump.’ So is it still possible for people to be shocked by what they learned?”

While some voters might want to move on from talk about Jan. 6, Rep. Elaine Luria, D-Va., one of the committee members, said that’s impossible because Trump and other conservatives continue to spread the false election fraud claims that were at the heart of the attack on the Capitol.

“In my mind, the forces that led to the events on Jan. 6, they still exist” she told MSNBC on Tuesday night. “They still present a danger.”

Republicans have attacked the House probe as partisan. Senate Republicans last year blocked a bill to create a bipartisan, independent commission to investigate Jan. 6, arguing the body would have duplicated other investigations and should also have examined violence during 2020’s racial justice protests across the country.

The House responded by forming its own investigative committee that was to include eight Democrats and five Republicans. But after Speaker Nancy Pelosi blocked two of Minority Leader Kevin McCarthy’s picks — Reps. Jim Jordan of Ohio and Jim Banks of Indiana — because they voted against certifying the election, McCarthy pulled all Republican participation in the panel. (Jordan and McCarthy were among five House Republicans who later received subpoenas from the committee because they are believed to have information about the Jan. 6 attack or the preceding events.)

Reps. Liz Cheney of Wyoming and Adam Kinzinger of Illinois — Republicans who have been critical of Trump and voted to impeach him last year — then went against McCarthy’s wishes and joined the committee.

"We cannot leave the violence of Jan. 6 and its causes uninvestigated,” Cheney, the committee’s vice chairwoman, said at its first hearing in July. “We must know what happened here in the Capitol. We must also know what happened every minute of that day in the White House. Every phone call, every conversation, every meeting leading up to, during and after the attack.”

According to The New York Times, Rep. Elise Stefanik, R-New York, is overseeing the Republicans’ efforts to discredit the committee’s findings and plans to book Republican lawmakers on television to push a false claim that Pelosi is to blame for the Capitol attack.

“In one final feeble attempt to distract Americans from their abysmal performance in the majority, House Democrats have shamelessly prepared a prime time courtroom-style drama for the American people that fails to address any of the issues that matter,” Stefanik wrote in an op-ed published Tuesday on the Daily Caller.

In another essay Tuesday for The Federalist, Jordan wrote that the committee’s true goal “is a repudiation of conservatism and all those who hold conservative values.”

“Democrats want to use the violence of Jan. 6 to stigmatize conservative voices and delegitimize conservative ideals,” he wrote. “They’ve even talked—condescendingly, of course—about treating conservatives as ‘cult’ members who need to be deprogrammed.”

The House does not have the authority to conduct criminal investigations, and the committee says it will use what it’s learned to propose legislation, including strengthening the Electoral Count Act.

The DOJ’s own investigations initially focused on individuals who breached the Capitol. But Attorney General Merrick Garland has said he’s committed to holding everyone accountable who committed crimes related to the insurrection and won’t shy away from pursuing cases likely to invite accusations of a politically motivated Justice Department.

In a sign the DOJ investigation is closing in on Trump’s inner circle, former Trump trade adviser Peter Navarro revealed in a court filing last week that he was issued a subpoena by a federal grand jury to testify about events surrounding Jan. 6. Navarro also was arrested Friday after being indicted for refusing to comply with a separate subpoena from the Jan. 6 committee.

While skeptical the hearings will change many opinions, Chartock said if those who sought to overturn the election are not held accountable, American democracy could be in danger.

“A great deal is going to be at stake here, and we know it,” he said. “You buy a lie, you eat a lie. This is a country that has been a democracy for quite a while. Does it have flaws? Yes. But these guys want to turn it around.”