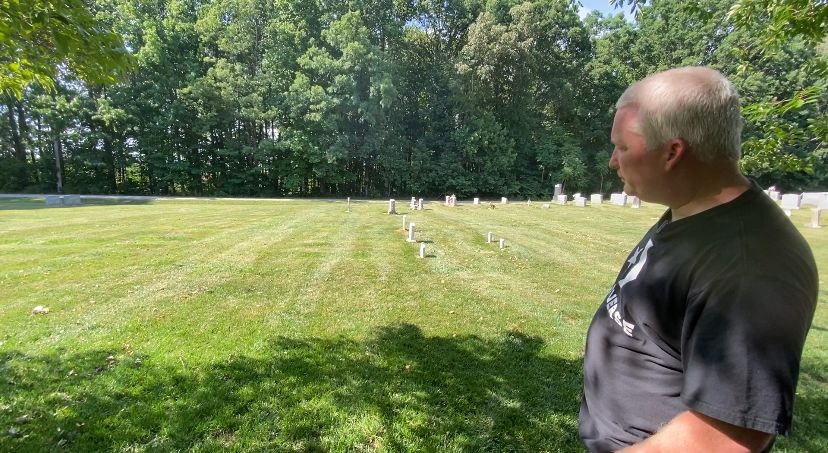 'I was shocked': Historian uncovers more than 100 unmarked graves in cemetery

Some marked graves in the section date back to the 1800s

Shawn Rogers is a historian and preservationist. He’s the director of the Mendenhall Homeplace in Jamestown. When he’s not working, he spends his time restoring headstones in local cemeteries.

“It’s exceedingly satisfying, particularly when I have a chance to share it with people in the community, and actual members of the family. People who are descendants of the people who I’ve been researching,” he said.

In April, someone reached out to Rogers and Deep River Friends Meeting Place to locate their relative’s grave in the cemetery that sits behind a Quaker church. A friend told Rogers that part of the cemetery used to be the Black section. Leaders at Deep River Friends Meeting Place knew of 40 to 50 people buried there. When Rogers took a closer look, he discovered much more.

“When I had a chance to probe manually, and found over 100 burials, I was shocked,” he said.

Rogers initially found 100 burials in the historically Black section of the cemetery, some dating back to the 1800s. The church and Rogers brought in a geologist, who was able to scan the plot. In total, they found 143 people buried across the section. Rogers installed stainless steel markers at every burial to mark them.

“One of the greatest things to come from this project is the connections that we’re making with families from historically Black communities, like Florence and Raleigh’s Crossroads. They’re coming together, they’re searching their memories, they’re searching the records and the memories of some of the older folks in their families to try and solve this mystery,” he said.

In the weeks to come, Rogers and a team will work to identify, connect with family members and properly mark the final resting places for all who are buried there. Rogers believes this discovery will add to the rich history found in Guilford County.

Deep River Friends Meeting Place plans to install a monument at the cemetery and inscribe the names of those buried there as they identify them.