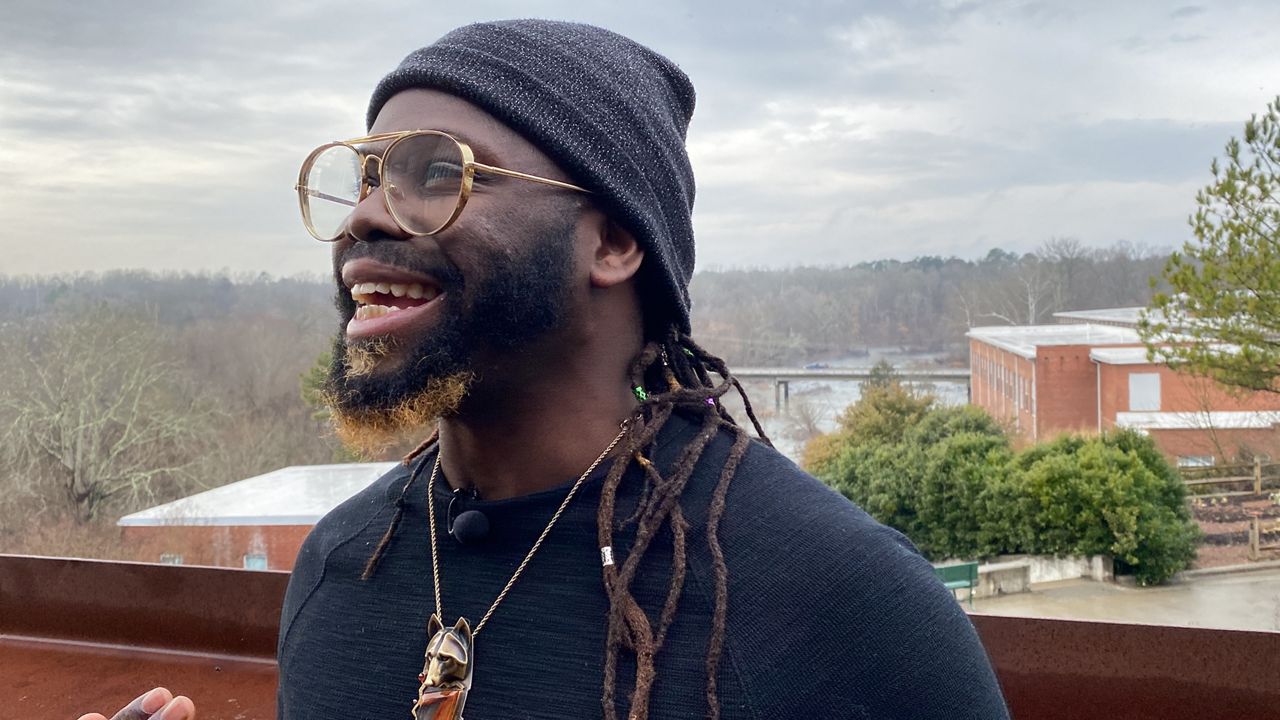 ‘I feel honored’: Chapel Hill’s first poet laureate reflects on his time in the position

CHAPEL HILL, N.C. – Chapel Hill’s first ever poet laureate is wrapping up his final year in the role. CJ Suitt, a Chapel Hill native, took the role in January 2020 and is serving as a new kind of record keeper.

Suitt says the job is what you make of it, and it all comes down to creating a sort of time capsule with his writing.

“I started writing poetry when I was probably in middle school. So it’s probably been about 20 years,” Suitt said. “I used to write love songs to girls I had crushes on in middle school. They were horrible. I thought I was going to be a rapper in a band. It was the age of the band.”

Suitt has a love affair with writing and, maybe even more so, preforming.

“I love writing around people and just the social space, that little buzz of a coffee shop sound is beautiful. Plus the nature, beautiful views of the river,” Suitt said.

This is Suitt’s last year serving as Chapel Hill’s poet laureate, and he is the first person to hold the title.

“It feels really good to be the first poet laureate. I feel honored. I feel grateful,” Suitt said.

January 2020 was an especially strange time to assume a role that revolves around witnessing and recording history.

“Given the pandemic and all the things, I think it’s been a little bit of a challenge. But in many ways, artists are called in these challenging moments to be the voice of frustration, the voice of hope, the voice of solidarity,” Suitt said.

As the poet laureate, he has a front row seat to history. Suitt is often preserving and documenting history for those who may feel overlooked.

“What I think is special about being in this position is representing for all those people in Chapel Hill that do not seem to have a seat at the table when decisions are being made for them without them. Being a person who is from that area of town, it is special for me to be in this role and for me to be the first,” Suitt said.

Suitt says he has written at least 100 poems during his time as poet laureate.

The town originally made the role a two year term but extended Suitt’s term to three years because of the pandemic. Suitt will be involved in the selection process for the new poet laureate at the end of this year.

The town has been working with Suitt to decide how this position may look as it progresses. They’ve been creating some framework and clear responsibilities for future poet laureates in Chapel Hill. The town is also increasing the stipend from $2,000 to $3,000.

“We really advocate also in community arts and culture to pay artists for the work that they do. We felt increasing the stipend an additional $1,000 could hopefully help provide a little more integrity to the position,” Melissa Bartoletta, the marketing and communications coordinator for Community Arts & Culture of Chapel Hill, said.

Applications for the next Chapel Hill poet laureate should open in July and will be open for several weeks. Once the selection process is complete, the next poet laureate will get appointed in the fall and officially start January 1, 2023.

To read and watch Suitt preform one of his poems, visit the Chapel Hill Community Arts & Culture website.