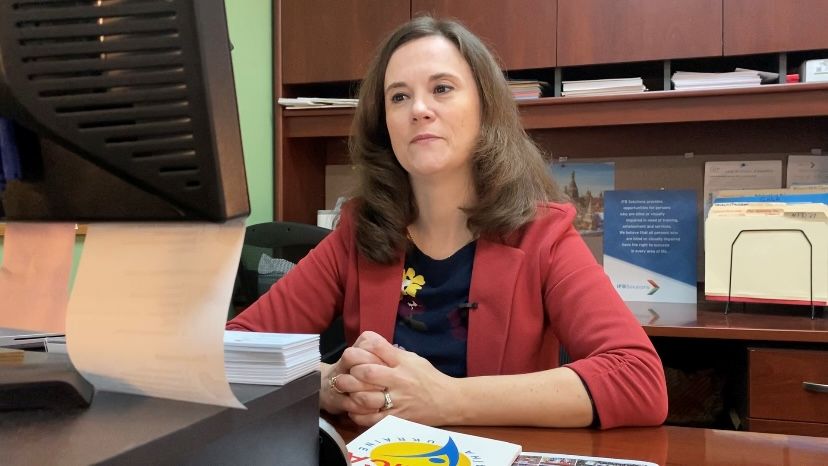 Ksenia Richards works out of office while checking updates on friends and family back in Ukraine.

WINSTON-SALEM, N.C. — Imagine waking up from a nightmare, only to discover you’re living in it. One where your friends and family are always within arms' reach of danger and destruction.

Richards is very involved with YMCA of Northwest North Carolina, which is one of the largest international supporters of Ukraine YMCA

Many of Richrads' family and friends still live in Ukraine

"This is where I kind of get my news about the destruction and people saved or whatnot. So this is news from this morning, I woke up and there were like 300-plus messages and the last time I checked was 12 a.m.," said Ksenia Richards, a Ukraine native who now lives in North Carolina. “It was very surreal when it did and very scary, because I realize if something like that started, Russia is not going to stop. They didn't do it to just come there and have a couple of shots fired. It’s going to be serious, so that’s when it became scary was on February 24.”

The unknown is the scariest, and looking through photo albums of friends and family back home leaves a wave of uneasiness.

"Her family is hiding right now. They also escaped from the Luchinets area,” Richards said.

That’s how Richards has felt since Russia first invaded Ukraine. Richards met and married her husband on a YMCA trip to the United States. They later married and put down roots in Winston-Salem.

“So this was me a few days before I got married and moved to the United States of America,” Richards said.

Richards is very involved with the YMCA and sits on the board of Camp Hanes YMCA. The YMCA of Northwest North Carolina has been in close partnership with YMCA Ukraine for 28 years.

And there’s another connection. The Winston-Salem “Y” is named for William G. White. White is known for re-creating YMCA Ukraine after the collapse of the Soviet Union.

“So, the national office of Ukraine YMCA was purchased by Bill White, and it still is the same place and that’s where I started working in 2003,” Richards said.

As the war continues, the Ukraine YMCA is doing all it can thanks to the financial help from the YMCA in northwest North Carolina.

“In Ukraine right now, out of 23 local YMCAs across the country, probably 12 of those remain active, and they support local territorial defense. I know some of them work with mothers and children, and some of them have access to buildings where they can place refugees and people who leave their home,” Richards said.

A decision to leave your home is one nobody should ever have to make and while leaders across the world decide on the next steps, questions still linger.

“It’s a tough choice, like who do you sacrifice? People of Ukraine or potentially not just other native members?” Richards asked.

Editor's note: This article has been updated to state the name of the YMCA's camp as YMCA Camp Hanes.