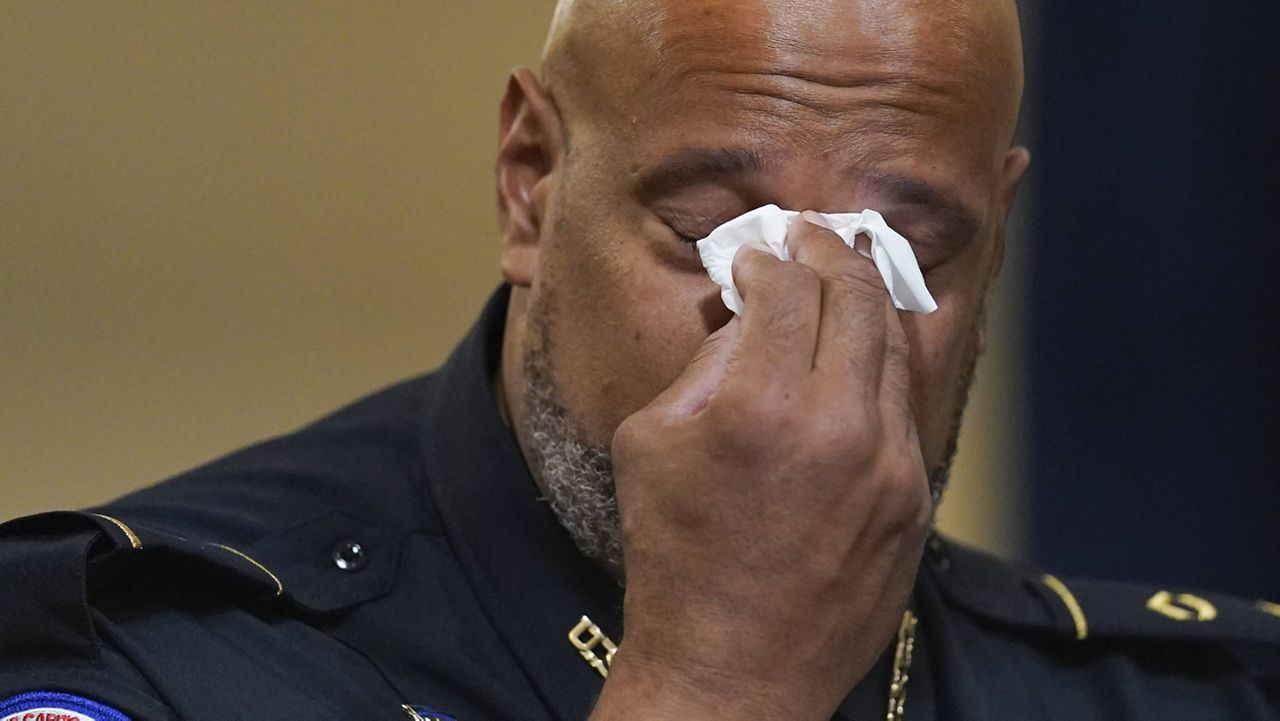 'Like something from a medieval battle': Officers testify in opening hearing for Jan. 6 committee

Four law enforcement officers on Tuesday described the horrors they endured Jan. 6 in defending the U.S. Capitol against a pro-Trump mob seeking to stop the certification of Joe Biden’s election victory.


They told lawmakers on Capitol Hill that they were called traitors and besieged with racial slurs, attacked with weapons including hammers, flagpoles, bear spray and their own batons and shields, and then left with physical and psychological trauma they’re still dealing with today.

The testimony was the first heard by the House’s select committee on the Capitol riot.

“What we were subjected (to) that day was like something from a medieval battle,” said Capitol Police Officer Aquilino Gonell. “We fought hand-to-hand, inch-by-inch to prevent an invasion of the Capitol by a violent mob intent on subverting our democratic process.”

Gonell said the rioters called him a “traitor,” and a “disgrace” and said he should be executed.

Tears streamed down his face as he explained how his family, watching the violence unfold on television, texted him frantically, but it was 2½ hours later before he could let them know he was still alive. He said when he returned home at 4 a.m. the following day, his wife rushed to hug him, but he pushed her away, concerned about the chemicals used by rioters that were still on his uniform.

Gonnell said he reported to work the next 15 days in a row despite having sustained injuries to both of his hands, left shoulder, left calf and right foot. He’s already undergone one surgery and recently learned he’ll need another.

“I could have lost my life that day,” Gonnell testified. “Not once, but many times.”

Metropolitan Police Officer Michael Fanone said he suffered a heart attack, concussion, a traumatic brain injury and post-traumatic stress disorder after rioters dragged him down the Capitol steps and beat him. The heart attack was likely caused by being electrocuted repeatedly by a stun gun during the melee, he said.

“During those moments, I remember thinking there was a very good chance I would be torn apart or shot to death with my own weapon,” Fanone said. “I thought of my four daughters. They might lose their dad.”

Fanone grew angrier as he shifted his testimony to discuss the Republican lawmakers who have sought to whitewash the events of Jan. 6.

“What makes the struggle harder and more painful is to know so many of my fellow citizens, including so many of the people I put my life at risk to defend, are downplaying or outright denying what happened,” Fanone said. “I feel like I went to hell and back to protect them and the people in this room. But too many are now telling me that hell doesn't exist, or that hell actually wasn't that bad. The indifference shown to my colleagues is disgraceful.”

The hearing opened with the committee showing a video with images of rioters fighting with officers and audio from police radio. The video included Metropolitan Police Officer Daniel Hodges screaming in agony as he was crushed against a hallway doorframe.

“On my left was a man with a clear, red shield stolen during the assault,” Hodges described. “He slammed it against me and, with all the weight of the bodies pushing behind him, trapped me. My arms were pinned and effectively useless, trapped against either the shield on my left or the doorframe on my right. With my posture, granting me no functional strength or freedom of movement, I was effectively defenseless and gradually sustaining injury from the increasing pressure of the mob.”

Hodges repeatedly referred to the rioters as “terrorists” during his testimony.

Capitol Police Office Harry Dunn testified that supporters of former President Donald Trump were saying they were at the Capitol to “stop the steal” and that “nobody voted for Joe Biden.” When he told some of them that he voted for Biden — arguing “Does my vote not count?” and “Am I nobody?” — they began to shout racist slurs at him.

“One woman in a pink MAGA shirt yelled: ‘You hear that, guys? This n***** voted for Joe Biden!’” Dunn said, adding that others soon joined in to shout the N-word at him.

Dunn said other Black officers later told him their own stories of racial abuse on Jan. 6.

He said he became very emotional in telling one colleague about the racial slurs he heard and and began yelling, “How the blank could something like this happen? Is this America?”

Dunn, who said he’s still battling the psychological effects of the riot and that he regularly seeks counseling, called for the committee to get to the bottom of what happened, including holding Trump responsible.

"If a hitman is hired and he kills somebody, the hit man goes to jail. But not only does the hit man go to jail, but the person who hired them does," Dunn said. "There was an attack carried out on Jan. 6, and a hit man sent them."

Just before the riot, Trump, who had falsely claimed for two months that there was widespread fraud in the presidential election, urged a rally crowd near the White House to march to the Capitol. He told his supporters, “You will never take back our country with weakness” and, “If you don't fight like hell, you're not going to have a country anymore.”

Trump was impeached, for a second time, by the House for inciting an insurrection, but the vote in the Senate fell short of the two-thirds needed to acquit him.

The creation of the select committee has come despite much Republican opposition. After there was a bipartisan agreement in the House to form an independent, bipartisan commission to investigate the Capitol riot and the events that led up to it, Senate Republicans eventually killed the legislation.

In response, House Speaker Nancy Pelosi, D-Calif., moved to form the Democratic-led select committee, which was to include eight members appointed by her and five appointed by House Minority Leader Kevin McCarthy, R-Calif. McCarthy, however, pulled all his appointments after Pelosi rejected two of his picks, saying their “antics” in support of Trump, and his lies that he won the election, weren’t appropriate for the serious investigation.

Pelosi has appointed two Republicans to the panel — Rep. Liz Cheney of Wyoming and Rep. Adam Kinzinger of Illinois — two Trump critics who were the only two members of the GOP to vote for the select committee.

Cheney said at Tuesday’s hearing that “we cannot leave the violence of Jan. 6 and its causes uninvestigated.”

“We must know what happened here at the Capitol,” she said. “We must also know what happened every minute of that day in the White House, every phone call every conversation every meeting leading up to during an after the attack.

"If those responsible are not held accountable, and if Congress does not act responsibly, this will remain a cancer on our constitutional republic," the Wyoming congresswoman added.

Kinzinger, an Air Force officer who served in Iraq and Afghanistan, fought back tears as he commended the officers.

“You guys may individually feel a little broken,” he said. “ … But you guys won. You guys held.”

He, too, defended his role on the committee.

“Like most Americans, I'm frustrated that six months after a deadly insurrection breach the United States Capitol for several hours on live television, we still don't know exactly what happened,” Kinzinger said. “Why? Because many in my party have treated this as just a another partisan fight. It's toxic.

“This cannot continue to be a partisan fight. I'm a Republican, I'm a conservative. But in order to heal from the damage caused that day, we need to call out the facts. It's time to stop the outrage and the conspiracies that fueled the violence and division in this country. And most importantly, we need to reject those that promote it.”

Kinzinger asked all four witnesses if they think Congress should move on from riot, as some Republicans have suggested. They all said no.

Rep. Bennie Thompson, D-Miss., who chairs the committee, said before the hearing that the first meeting would “set the tone” of the probe, which will examine not only Trump’s role in the insurrection but the right-wing groups involved in coordination before the attack, white supremacists among them.

“The whole world saw the reality of what happened on Jan. 6 — the hangman's gallows sitting out there on our nation's mall, the flag of that first failed and disgraced rebellion against our union being paraded through the Capitol, the hatred, the bigotry, the violence, and all of it for a vile, vile lie,” Thompson said. “Let's be clear, the rioters who tried to rob us of our democracy were propelled here by a lie. As chairman of this committee, I will not give that lie any fertile ground.”

The panel will also look at the security failures that allowed hundreds of people to breach the Capitol, sending lawmakers running for their lives. Some of those who broke in were calling for the deaths of Pelosi and then-Vice President Mike Pence, who was hiding just feet away from the mob.

McCarthy has stayed close to Trump since the insurrection and has threatened to pull committee assignments from any Republican who participates on the Jan. 6 panel. On Monday, he called Cheney and Kinzinger, who is also sitting on the committee, “Pelosi Republicans,” an effort that Cheney immediately called “childish.”

Shortly after the insurrection, almost every Republican denounced the violent mob – including Trump himself, who told his supporters to “fight like hell” to overturn his defeat – but many have softened their tone in recent months and weeks.

Some have gone farther, with Georgia Rep. Andrew Clyde saying a video of the rioters looked like “a normal tourist visit” and Arizona Rep. Paul Gosar repeatedly saying that a woman who was shot and killed by police as she was trying to break into the House chamber was “executed.” Others have falsely claimed that Democrats or liberal groups were responsible for the attack.

On Tuesday, a group of Republicans, including McCarthy, held a news conference about the insurrectionists who were arrested and blamed  Pelosi for security failures on Jan. 6.

“Unfortunately, Speaker Pelosi will only pick people onto the committee that will ask the questions she wants asked,” McCarthy said. “That becomes a failed committee and a failed report, a sham that no one can believe.”

"He should have immediately denounced the mob when he saw what was unfolding," McCarthy said in January. "These facts require immediate action by President Trump."

"A fact-finding commission would be prudent," he said at the time.

Republicans also did not answer questions about whether or not Sen. Mitch McConnell, R-Ky., who was Senate Majority Leader on Jan. 6, also bears responsibility for security failures.