The suspect in a series of shootings at three Georgia spas that left eight people dead Tuesday – most of them women of Asian descent – purchased the gun the same day, police said Thursday.

Robert Aaron Long, 21, of Woodstock, Georgia, has been charged with eight counts of murder and one count of assault between Cherokee County, Georgia, and Atlanta, in the worst mass killing in two years.

Police said that the investigation is still wide open, and the suspect could still face hate crime charges. Police also noted that the suspect was a customer of at least two of the spas.

"Our investigation is looking at everything, so nothing is off the table," Deputy Police Chief Charles Hampton Jr. said during a news conference Thursday.

Responding to a question about mental illness and buying a gun, Hampton said that, "I’m not sure about any mental illness. All we do know is that he did purchase the gun the day of the incident."

The names of the shooting victims were released by the Cherokee County Sheriff’s Office and the Fulton County Medical Examiner's office:

Long told police that Tuesday’s attack was not racially motivated. He claimed to have a sex addiction, and authorities said he apparently lashed out at what he saw as sources of temptation. Police have said they are still working to determine a motive, but Long’s statements spurred outrage and widespread skepticism in the Asian American community, which has increasingly been targeted for violence during the coronavirus pandemic.

Cherokee County Sheriff’s Office spokesman Capt. Jay Baker drew criticism for saying Long had “a really bad day” and “this is what he did.”

Sheriff Frank Reynolds released a statement Thursday acknowledging that some of Baker’s comments stirred “much debate and anger” and said the agency regrets any “heartache” caused by his words.

“In as much as his words were taken or construed as insensitive or inappropriate, they were not intended to disrespect any of the victims, the gravity of this tragedy or express empathy or sympathy for the suspect,” Reynolds said in the statement, adding that Baker “had a difficult task before him, and this was one of the hardest in his 28 years in law enforcement.”

Lawyer J. Daran Burns issued a statement Thursday saying he had been appointed to represent Long. He offered condolences to victims’ families and said he was working on Long’s behalf “to investigate the facts and circumstances” surrounding the slayings.

Long waived his right to an initial hearing in Cherokee County Magistrate Court on his lawyer’s advice, the statement said.

FBI Director Christopher Wray told NPR Thursday that while the investigation is still ongoing, "it does not appear that the motive was racially motivated."

Previous Developments in the Story Below

"They were very distraught and they were very helpful in this apprehension," Cherokee County Sheriff Frank Reynolds, who spoke to the family directly, told reporters Wednesday.

Police have not yet offered a motive in the shootings, but Cherokee County sheriff’s Capt. Jay Baker told reporters that the suspect "apparently has an issue, what he considers a sex addiction, and sees these locations as something that allows him to go to these places, and it’s a temptation for him that he wanted to eliminate."

"We are very early in this investigation. Even though we've made an arrest, there's still a lot more work to be done," Atlanta Police Chief Rodney Bryant said Wednesday said. "I know that that's going to be a concern and that you're probably asking that of many of us, we're just not there, as of yet."

Sheriff Frank Reynolds said it was too early to tell if the attack was racially motivated — “but the indicators right now are it may not be.”

The attack was the sixth mass killing this year in the U.S., and the deadliest since the August 2019 Dayton, Ohio, shooting that left nine people dead, according to a database compiled by The Associated Press, USA Today, and Northeastern University.

Atlanta's mayor, Keisha Lance Bottoms, said that the suspect was believed to be on his way to Florida "perhaps to carry out additional shootings," and noted that "this could have been worse."

"I can't express enough my gratitude for the coordination and the public as a whole should be grateful that this suspect was quickly apprehended because it is very likely that there would have been more victims," Bottoms said.

President Joe Biden weighed in on the deadly shooting, saying that violence against Asian Americans is "very, very troubling," but would not comment on the motive of the killer as the investigation is still ongoing.

“The investigation is ongoing and the question of motivation is still to be determined," Biden said. "But whatever the motivation here, I know Asian Americans ... are very concerned, because as you know I have been speaking about the brutality against Asian Americans for the last couple of months and I think it is very, very troubling."

"I am making no connection at this moment of the motivation of the killer," Biden added. "I am waiting for an answer from – as the investigation proceeds – from the FBI and from the Justice Department. I'll have more to say when the investigation is completed."

Vice President Kamala Harris expressed condolences to the families of the victims, and said that the tragedy "speaks to a larger issue, which is the issue of violence in our country and what we must do to never tolerate it and to always speak out against it."

"We're not yet clear about the motive. But I do want to say to our Asian-American community that we stand with you and understand how this has frightened and shocked and outraged all people," she added.

First Lady Dr. Jill Biden, during an event at a school in New Hampshire, addressed her condolences to the families of the shooting victims: "My heart is with you. And I hope that all Americans will join me in praying for everyone touched by this senseless tragedy."

Former President Barack Obama said that "although the shooter’s motive is not yet clear, the identity of the victims underscores an alarming rise in anti-Asian violence that must end."

Yesterday's shootings are another tragic reminder that we have far more work to do to put in place commonsense gun safety laws and root out the pervasive patterns of hatred and violence in our society.

"Yesterday's shootings are another tragic reminder that we have far more work to do to put in place commonsense gun safety laws and root out the pervasive patterns of hatred and violence in our society," he added. "Michelle and I pray for the victims, their families, everyone grieving these needless and devastating killings—and we urge meaningful action that will save lives."

The killings horrified the Asian American community, which saw the shootings as an attack on them, given a recent wave of assaults that coincided with the spread of the coronavirus across the United States. The virus was first identified in China, and then-President Donald Trump and others have used racially charged terms to describe it.

The attacks began when five people were shot at Youngs Asian Massage Parlor near Woodstock, about 30 miles north of Atlanta, authorities said. Four of them died.

The manager of a boutique next door said her husband watched surveillance video after the shooting and the suspect was sitting in his car for as long as an hour before going inside. 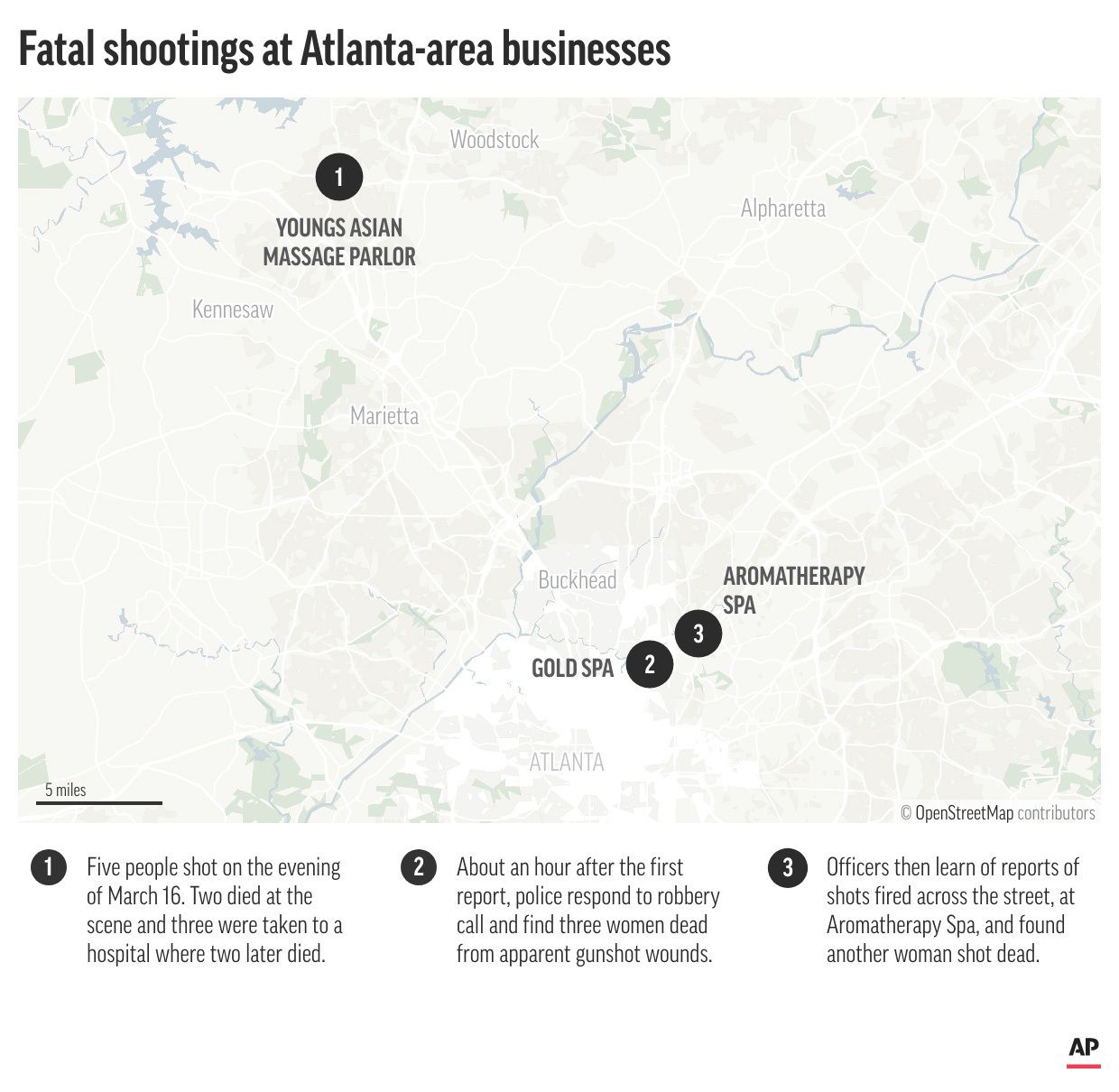 They heard screaming and women running from the business, said Rita Barron, manager of Gabby’s Boutique.

The same car was then spotted about 30 miles away in Atlanta, where a call came in about a robbery at Gold Spa and three women were shot to death. Another woman was fatally shot at the Aromatherapy Spa across the street.

Long was arrested hours later by Crisp County deputies and state troopers. He refused to stop on a highway and officers bumped the back of his car, causing him to crash, Sheriff Billy Hancock said.

Officers found Long thanks to help from his parents, who recognized him from surveillance footage posted by authorities and gave investigators his cellphone information, which they used to track him, authorities said.

Over the past year, thousands of incidents of abuse have been reported to an anti-hate group that tracks incidents against Asian Americans, and hate crimes in general are at the highest level in more than a decade.

“While the details of the shootings are still emerging, the broader context cannot be ignored,” Asian Americans Advancing Justice-Atlanta said in a statement. “The shootings happened under the trauma of increasing violence against Asian Americans nationwide, fueled by white supremacy and systemic racism.”

The American Psychiatric Association does not recognize sex addiction in its main reference guide for mental disorders. While some people struggle to control their sexual behaviors, it’s often linked to other recognized disorders or moral views about sexuality, David Ley, clinical psychologist and author of "The Myth of Sex Addiction," told The Associated Press.

"These sexual behaviors getting this label are a symptom, not a cause," Ley said.