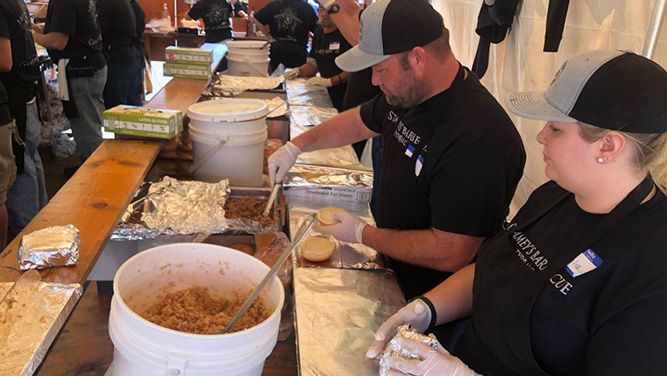 LEXINGTON, N.C. -- Lexington hosts the great debate on barbecue styles. No matter what your favorite is, it's a food worth celebrating.

Some would say Lexington is the mecca of barbecue, like Mark McMasters. McMasters spends his day serving up his own style of barbecue sauce called McMasters' Hawg Sauce and is selling it at the Barbecue Festival in Lexington.

"We have sold quite a bit each year, it has been very successful, last year I think we sold like 260 bottles," McMasters said.

The sweet and tangy sauce is a family recipe he says is totally irresistible.

"It has kind of a barbecue everything sauce because it goes on meatballs, meatloaf, chicken stir-fry but definitely on pork and ribs," McMaster explained.

He's not the only one sharing his special recipe with barbecue lovers. Chris Scott hasn't been in business for long but is already crediting this festival with his success. His sauce and seasoning company, Spicer's Sauces has only been around for a little over two years.

"We are just growing leaps and bounds and a lot of that is because of festivals like this one," Scott said.

Some of his sauces have won awards for being so good, like Spicer's Sauces Pig Slapping BBQ Sauce.

"You need to be here if you want to make it in barbecue," Scott said.

The Barbecue Festival in Lexington attracts over 160,000 people every year, and features more than 100 vendors.

HAPPENING NOW: The 36th Annual @CityofLexington Barbecue Festival is busy busy busy! Thousands of people are coming out today to listen to live music, check out vendors and of course eat barbecue! More coming up on @SpecNewsTriad pic.twitter.com/qYxeYxSg3p