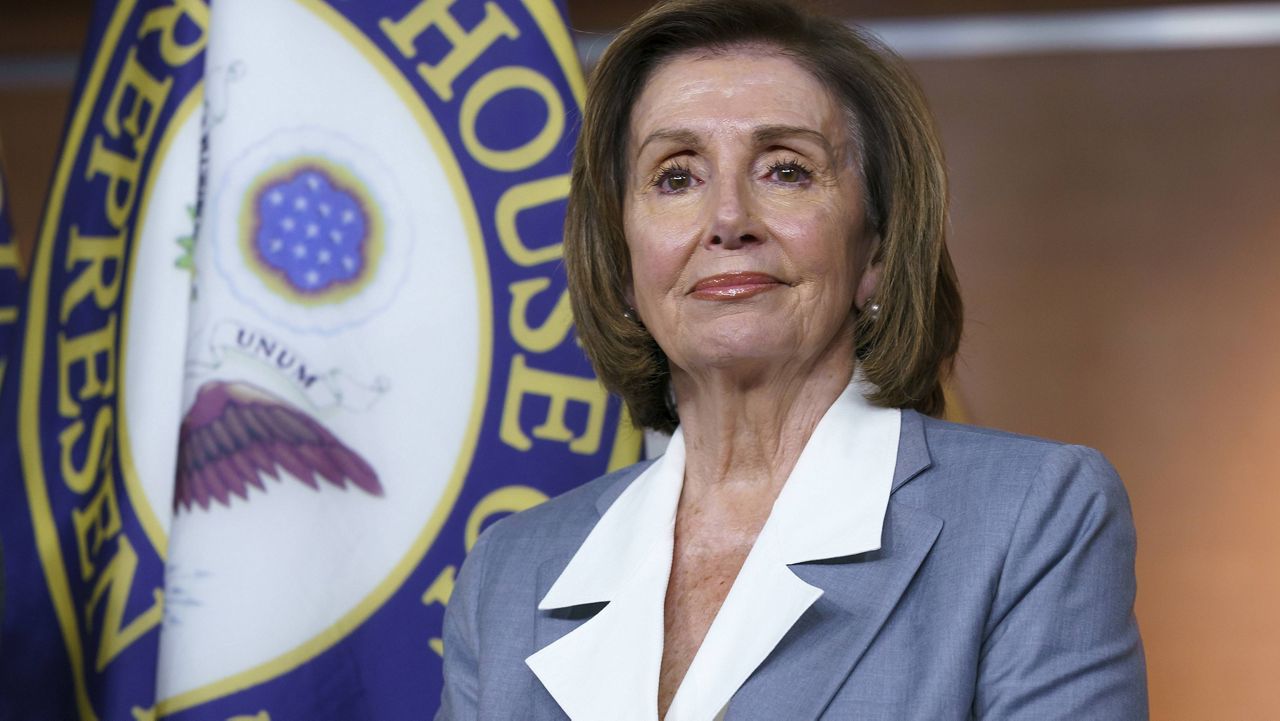 California is about to get a Courage Museum – a place to show examples of dark moments in history in order to prevent them.

While it does not scream ‘family vacation,’ Speaker Nancy Pelosi, D-San Francisco, is asking Congress to give the organization behind the museum, Futures Without Violence, a million dollars in hopes it can inspire a change amid a rise in violence across the country.


The senior vice president of Futures Without Violence, Rachael Smith Fals, said the goal of the up-and-coming museum is to encourage empathy, prevent violence and promote healing.

“A mission to convert a public space into public purpose: to end violence,” Fals said. “The Courage Museum at its core is about hope.”

In one room called ReThink Gallery, visitors will walk through a timeline of life to see how biology and culture can influence decisions about violence. Fals said visitors will see that violence can be learned from within the family, community or world because of “gender, racial, economic or political injustice,” where the effects can linger over several lifetimes.

In another room called Empathy Mirrors, visitors will shift from witness to participant as they consider questions like how violence feels and what accountability looks like. 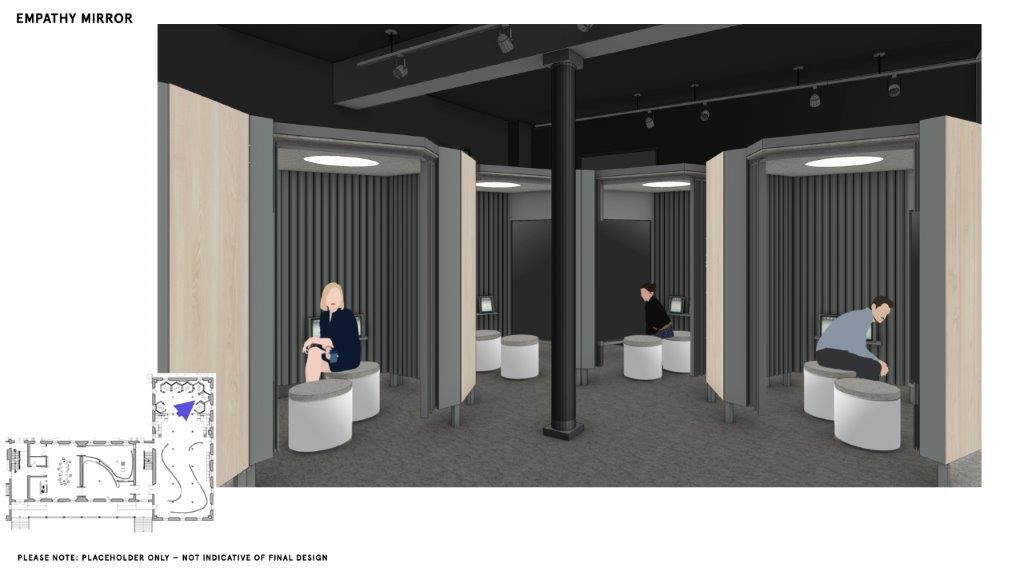 Image courtesy of Futures Without Violence

In Bearing Witness, visitors will explore what is at stake if issues that lead to violence are not addressed. 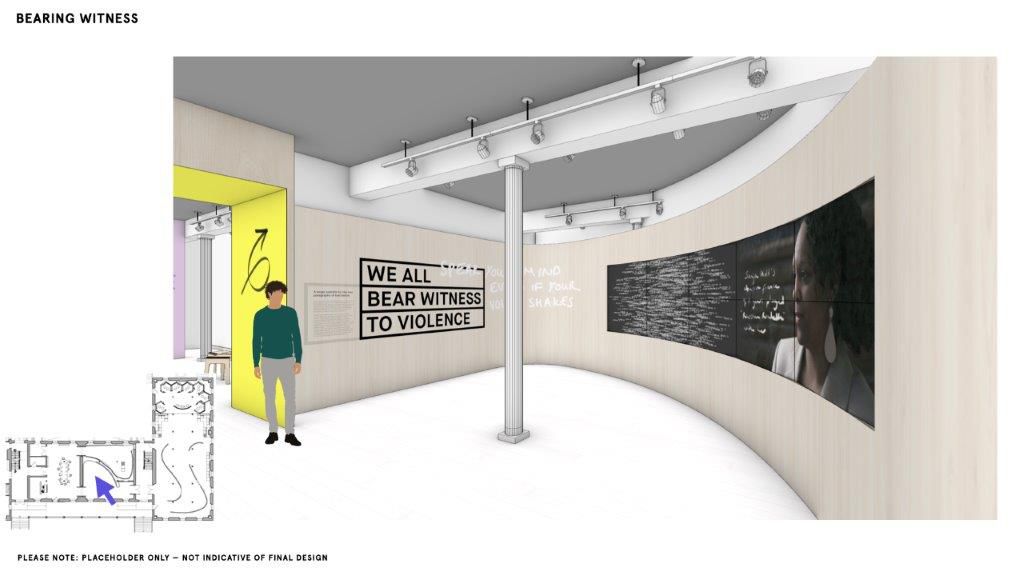 Image courtesy of Futures Without Violence

Finally, in Change is Real, visitors will see how people can create lasting solutions in the world of violence through courage.

“When you walk into the Courage Museum, you will feel seen. You will feel heard. You will be greeted by staff with people who have dedicated their lives to these issues,” Fals said. “You will meet real people along the way through your visitor journey who have endured a whole host of different forms of violence: bullying in schools, whether it is human trafficking, whether it is gun violence and school shootings.”

Fals submitted a Community Funding Request to her representative, Speaker Pelosi, for $1 million to expand their concrete location into an additional educational program.

The program would consist of lesson plans addressing violence that would be available to local schools to implement in their curriculum.

Speaker Pelosi chose to include that request onto her list of 10 projects and submitted it to Congress through a process called earmarking, where lawmakers can steer funds to local programs.

The American Accountability Foundation, a conservative non-profit organization, tweeted, “What’s old is new again. They said earmarks would be different this time, but [Speaker Pelosi] is up to her same old tricks,” in reference to past earmark abuses, which led Congress to end them a decade ago.

What's old is new again. They said earmarks would be different this time, but @SpeakerPelosi is up to her same old tricks. $1M in taxpayer dollars for a "Courage Museum" to praise courageous leftists like Christine Blasey Ford https://t.co/uh875vHxWH https://t.co/jcMlx4SGgF pic.twitter.com/xn09ULPls7

Speaker Pelosi had revived earmarks with new controls and defended her proposal.

“With the increased levels of domestic violence, child abuse, grief and loss experienced by youth during the COVID-19 pandemic, educators are in a critical position to support students,” Pelosi’s spokesperson said in a statement. “The Courageous Classrooms and Communities educational program will spread and scale the impact of Future’s trauma-sensitive programs by centering the needs of young people – motivating them to challenge the acceptability of violence and inspiring them to become courageous leaders in their communities.”

“$1M in taxpayer dollars for a “Courage Museum” to praise courageous leftists like Christine Blasey Ford.”

Ford accused Supreme Court nominee Brett Kavanaugh of sexual misconduct when both were in high school to derail his 2018 nomination.

“She gave license and she gave permission to millions of survivors, around the world who had never before even spoken, anything about their lived experiences,” Fals said.

Ford was never able to present proof of the alleged abuse but Fals said Futures stands by her and her strength to tell her story.

“Yes, we are dealing with difficult issues that are a reality for all of us, but this is a place about the possibility, this is about what you can do what every single person can do to engage in their communities in positive and transformative ways,” Fals said. “There’s never been anything quite like it before and this is designed to be a platform for action.”

For years, Futures had considered the idea. Their strategy is broken down into three parts: the creation of the space and team, the development of the conference center for Futures, and then the Courage Museum which will be built off their space at the Presidio of San Francisco. Now they are working to design the installations, hold focus group testing, and create content for the rooms and educational program.

Speaker Pelosi’s funding request for the museum has been included in the Labor, Health and Human Services, Education bill which is expected to be considered in the House next week, followed by Senate consideration.

Principal and Founder of Local Project and Chief Creative Director of Courage Museum, Jake Barton, is the same designer who helped create the 9/11 Memorial in New York and the Legacy Museum, in Alabama, which shows how white supremacy is linked to the oppression of black people in America.

Barton does not shy away from difficult issues.

Futures hopes to celebrate a soft opening for the Courage Museum in 2022, with a grand opening in 2023.