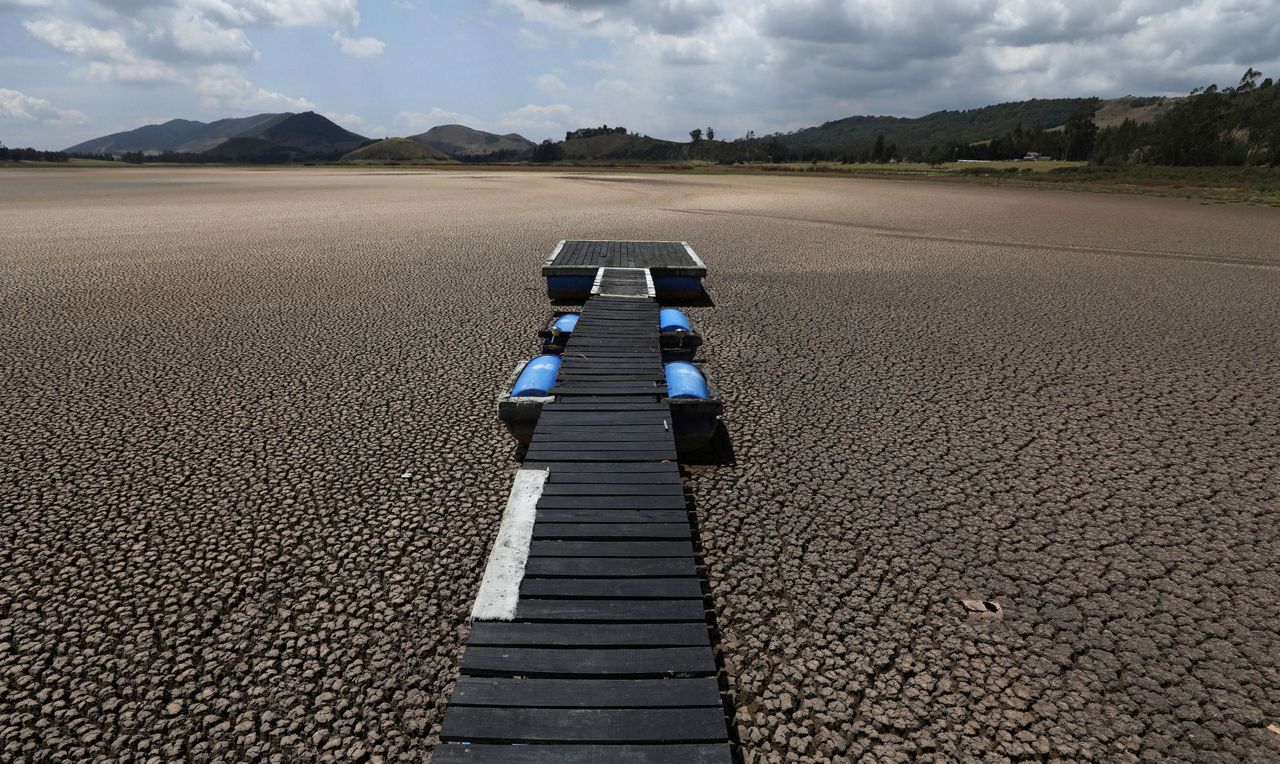 1 of 3
FILE - In this Wednesday, Feb. 17, 2021 file photo, a floating dock sits on the lakebed of the Suesca lagoon, in Suesca, Colombia. The lagoon, a popular tourist destination near Bogota that has no tributaries and depends on rain runoff, has radically decreased its water surface due to years of severe droughts in the area and the deforestation and erosion of its surroundings. (AP Photo/Fernando Vergara, File) 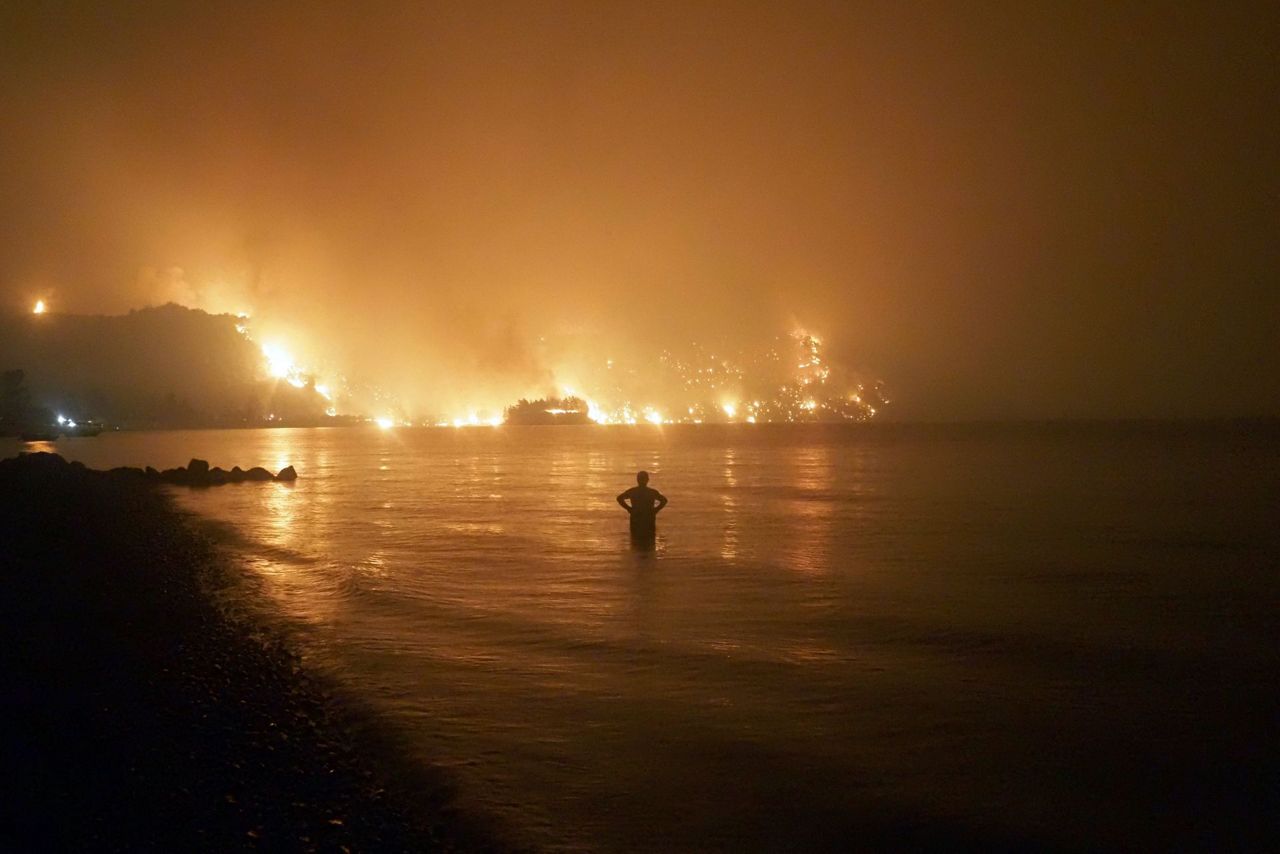 2 of 3
FILE - In this file photo dated Friday, Aug. 6, 2021, a man watches as wildfires approach Kochyli beach near Limni village on the island of Evia, about 160 kilometers (100 miles) north of Athens, Greece. A new massive United Nations science report is scheduled for release Monday Aug. 9, 2021, reporting on the impact of global warming due to humans. (AP Photo/Thodoris Nikolaou) 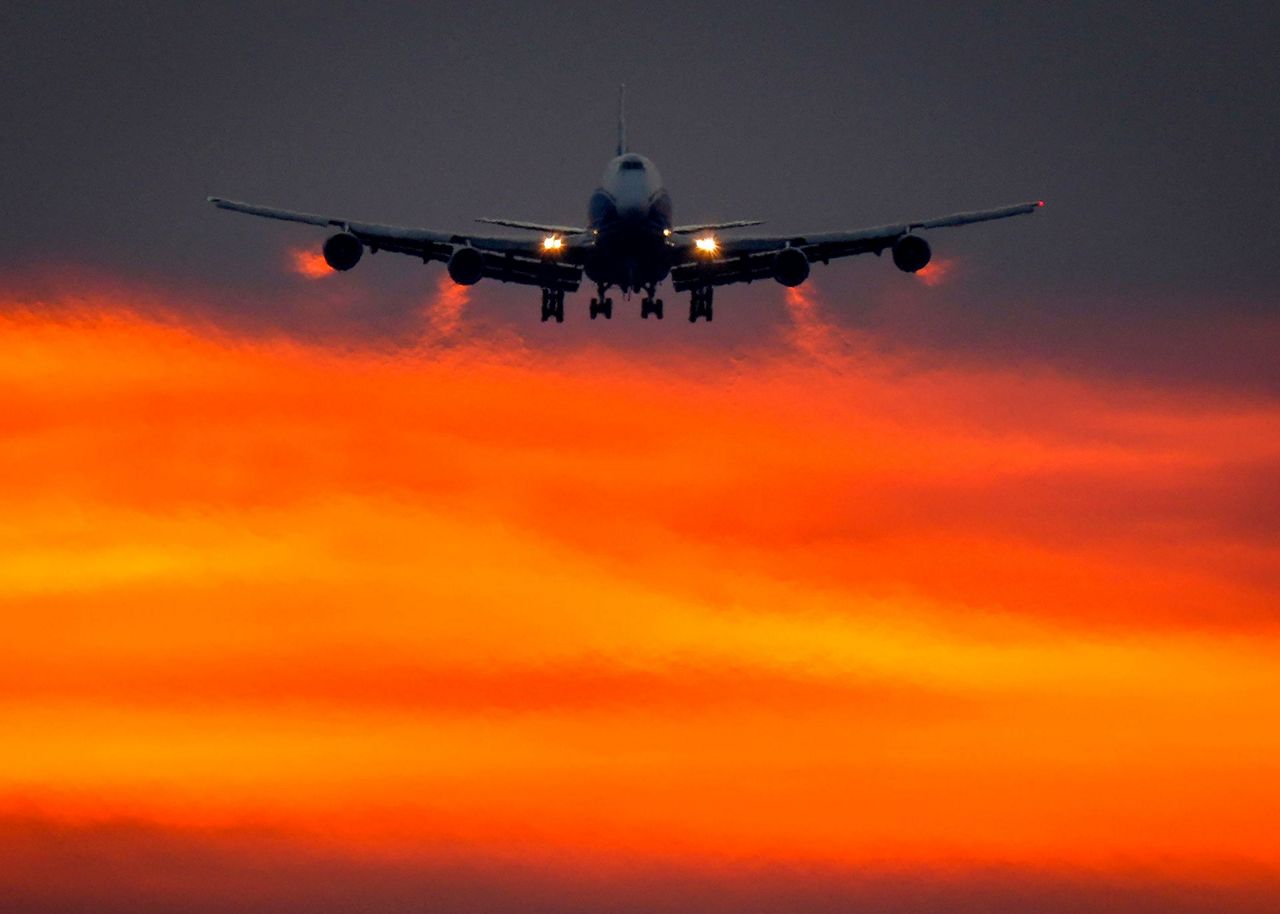 3 of 3
An aircraft approaches the international airport in Frankfurt, Germany, as the sun rises on Monday, Aug. 9, 2021. (AP Photo/Michael Probst)

The report says almost all of the warming that has occurred since pre-industrial times was caused by the release of heat-trapping gases such as carbon dioxide and methane. Much of that is the result of humans burning fossil fuels — coal, oil, wood and natural gas.

The authors say global temperatures have already risen by 1.1 degrees Celsius (2 degrees Fahrenheit) since the 19th century, reaching their highest in over 100,000 years, and only a fraction of that increase can have come from natural forces.

Almost all countries have signed up to the 2015 Paris climate accord, which aims to limit global warming to an increase of 2 degrees Celsius (3.6 Fahrenheit) above the pre-industrial average by the year 2100. The agreements says that ideally the increase would be no more than 1.5 degrees Celsius (2.7 degrees Fahrenheit).

But the report's 200-plus authors looked at five scenarios and concluded that all will see the world cross the 1.5-degree threshold in the 2030s — sooner than in previous predictions. Three of those scenarios will also see temperatures rise 2 degrees Celsius.

Further warming is “locked in" due to the greenhouse gases humans have already released into the atmosphere. That means even if emissions are drastically cut, some changes will be “irreversible" for centuries, the report said.

While many of the report’s predictions paint a grim picture of humans' impact on the planet and the consequences that will have going forward, the IPCC also found that so-called tipping points, like catastrophic ice sheet collapses and the abrupt slowdown of ocean currents, are “low likelihood,” though they cannot be ruled out.

Although temperatures are expected to overshoot the 1.5-degree-Celsius target in the next decade, the report suggests that warming could be brought back down to this level through what are known as “negative emissions.” That means sucking more carbon dioxide out of the atmosphere than is added, effectively cooling the planet again. The panel said that could be done starting about halfway through this century but doesn’t explain how, and many scientists are skeptical it’s possible.