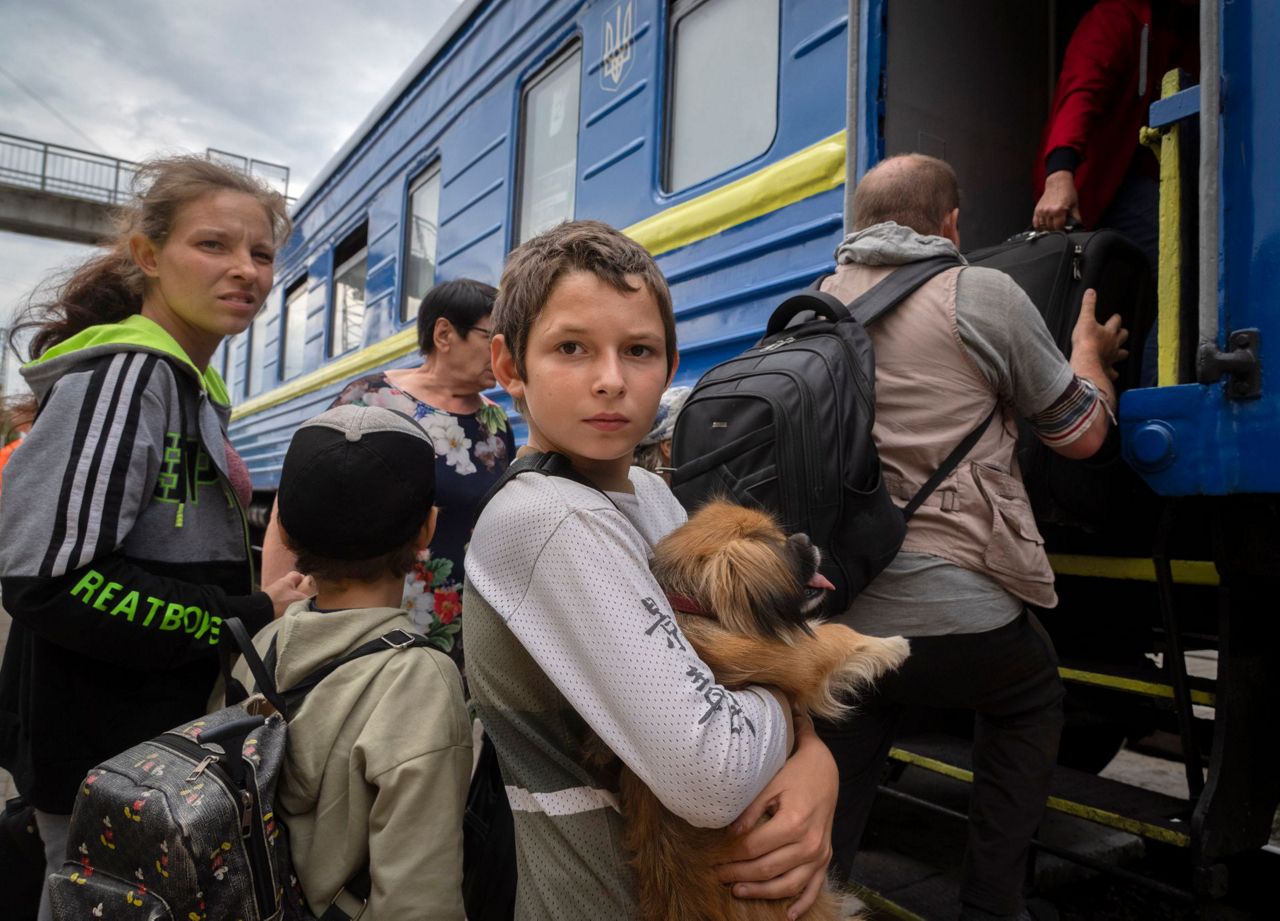 1 of 9
A boy holds his pet dog as his family evacuated from the war-hit area gets on an evacuation train in Pokrovsk, eastern Ukraine, Saturday , June 25, 2022. (AP Photo/Efrem Lukatsky) 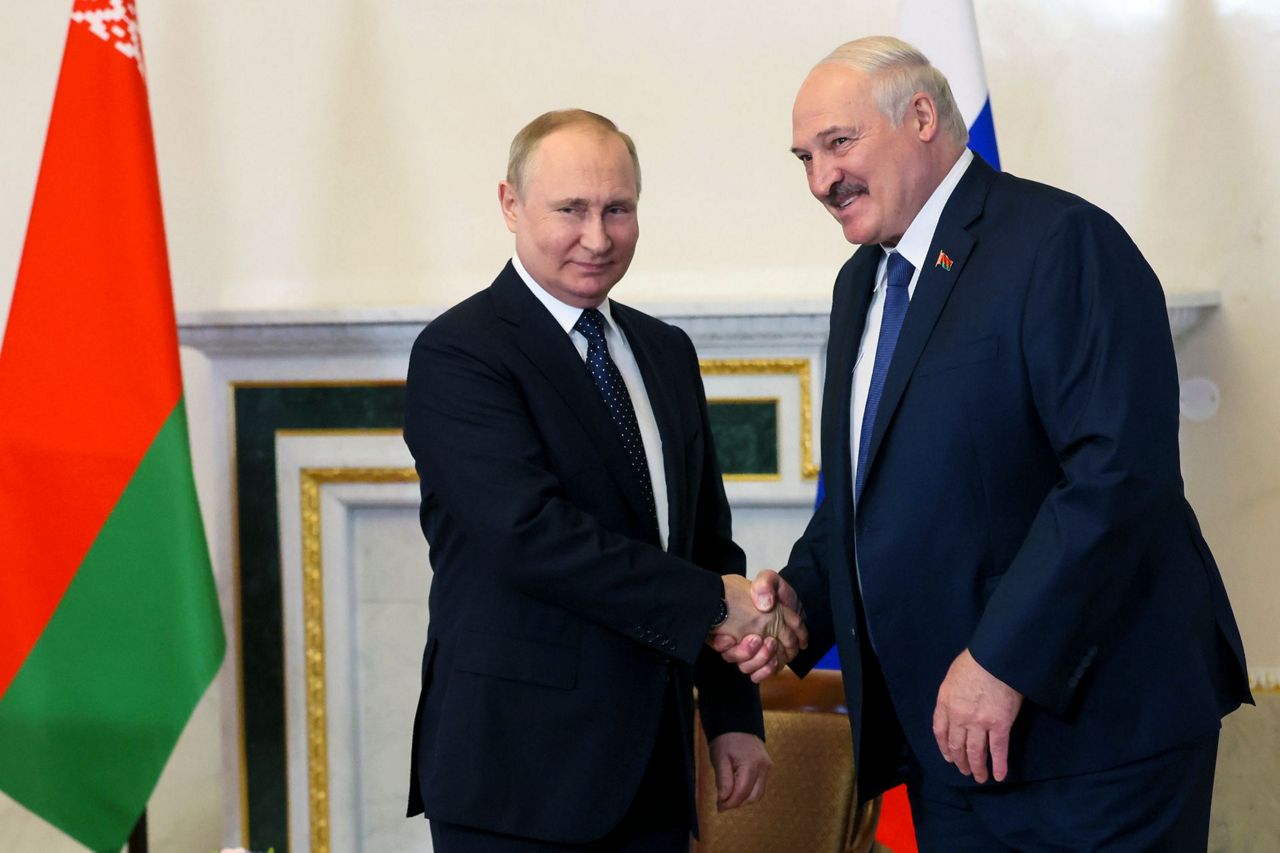 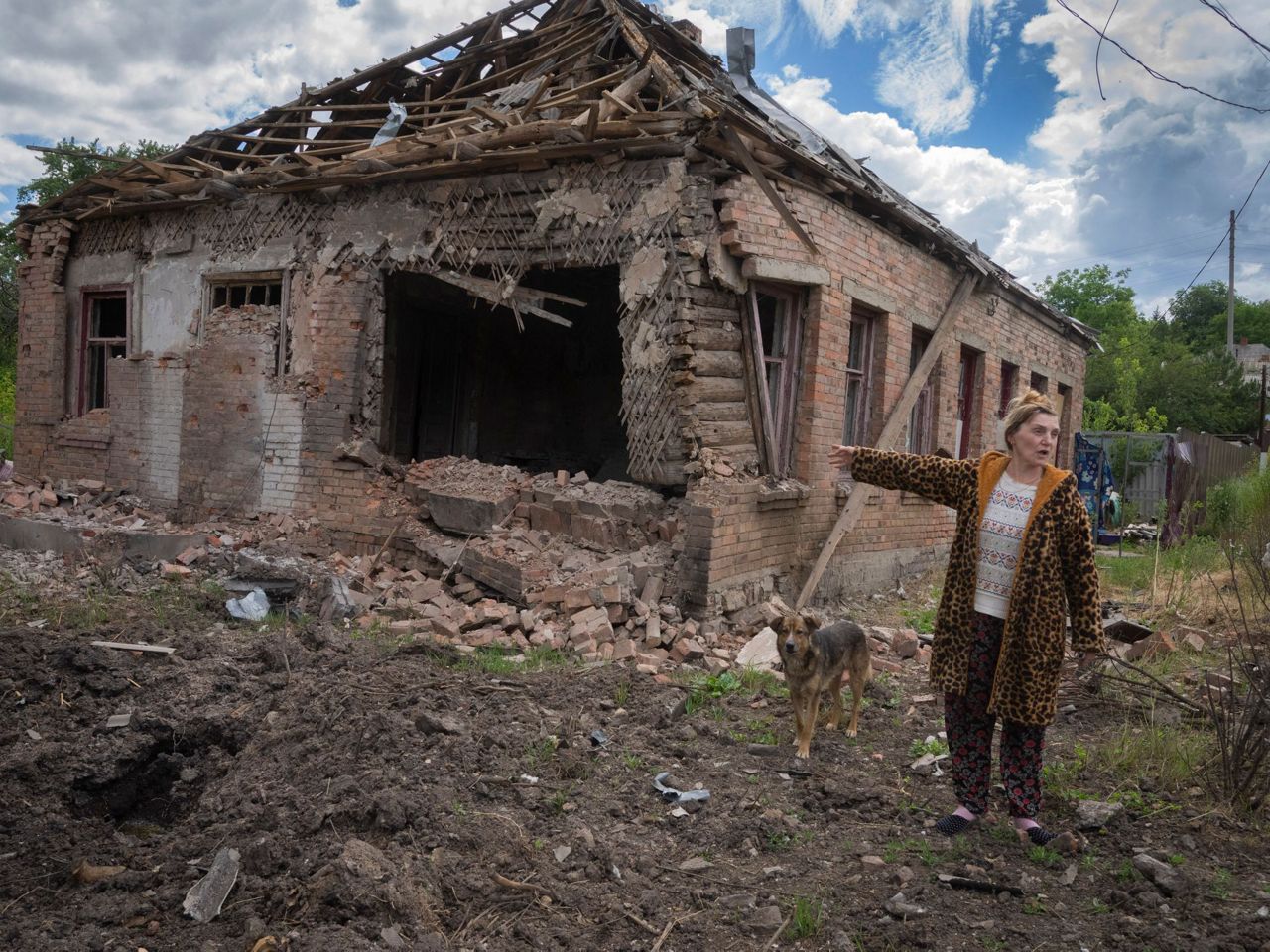 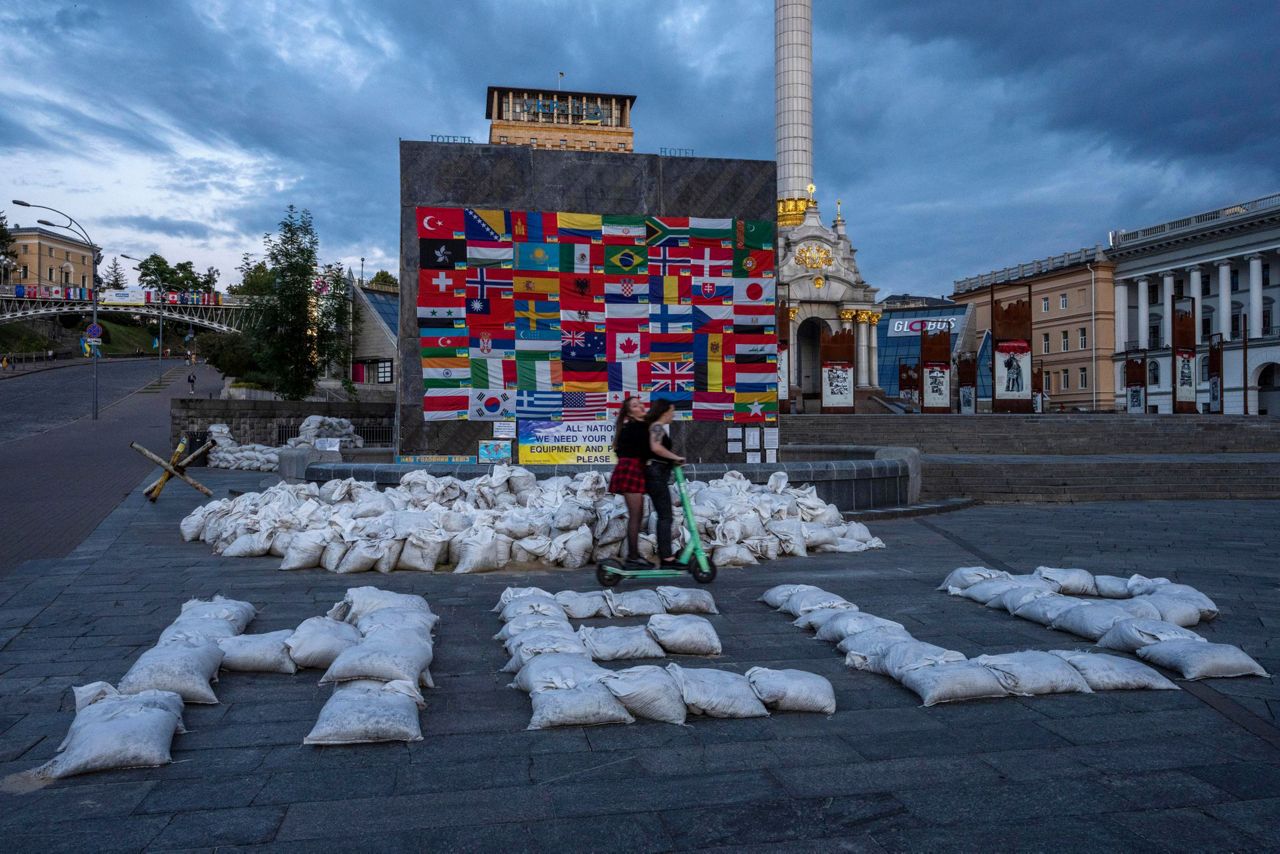 4 of 9
Women ride a scooter through Kyiv's Maidan Square, past sandbags that spell out 'HELP,' and flags displayed from around the world, in Ukraine, Saturday, June 25, 2022. (AP Photo/Nariman El-Mofty) 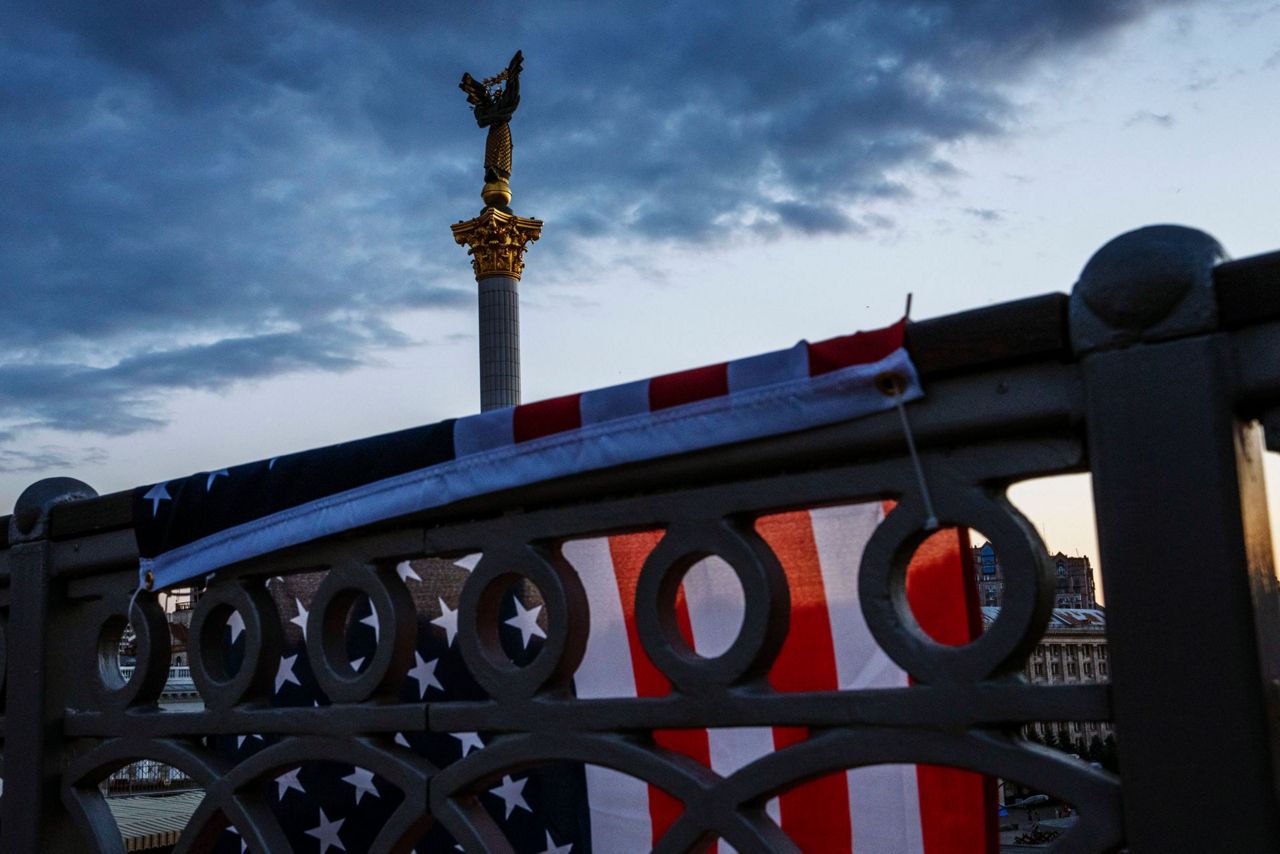 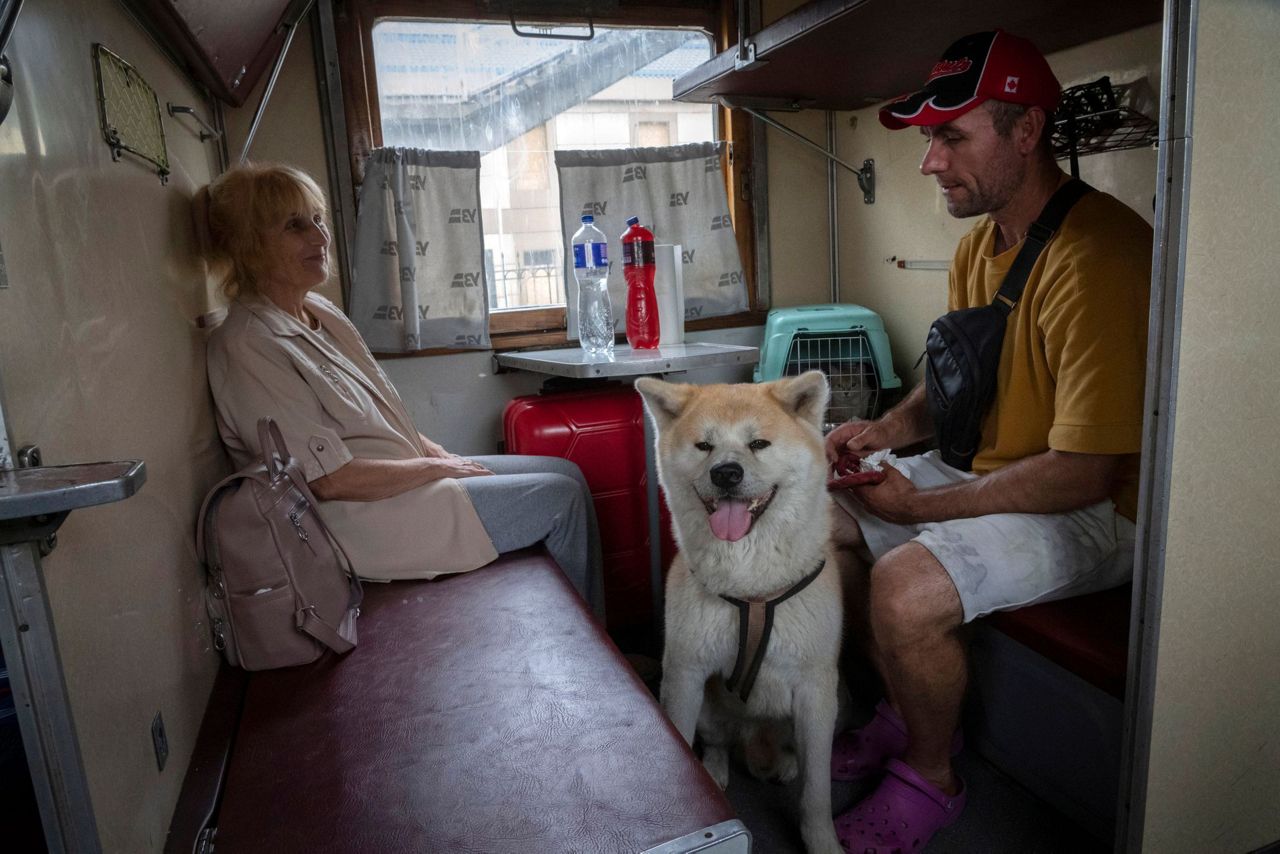 6 of 9
People evacuated from the war-hit area sit inside an evacuation train with their pet dog waiting for departure in Pokrovsk, eastern Ukraine, Saturday, June 25, 2022. (AP Photo/Efrem Lukatsky) 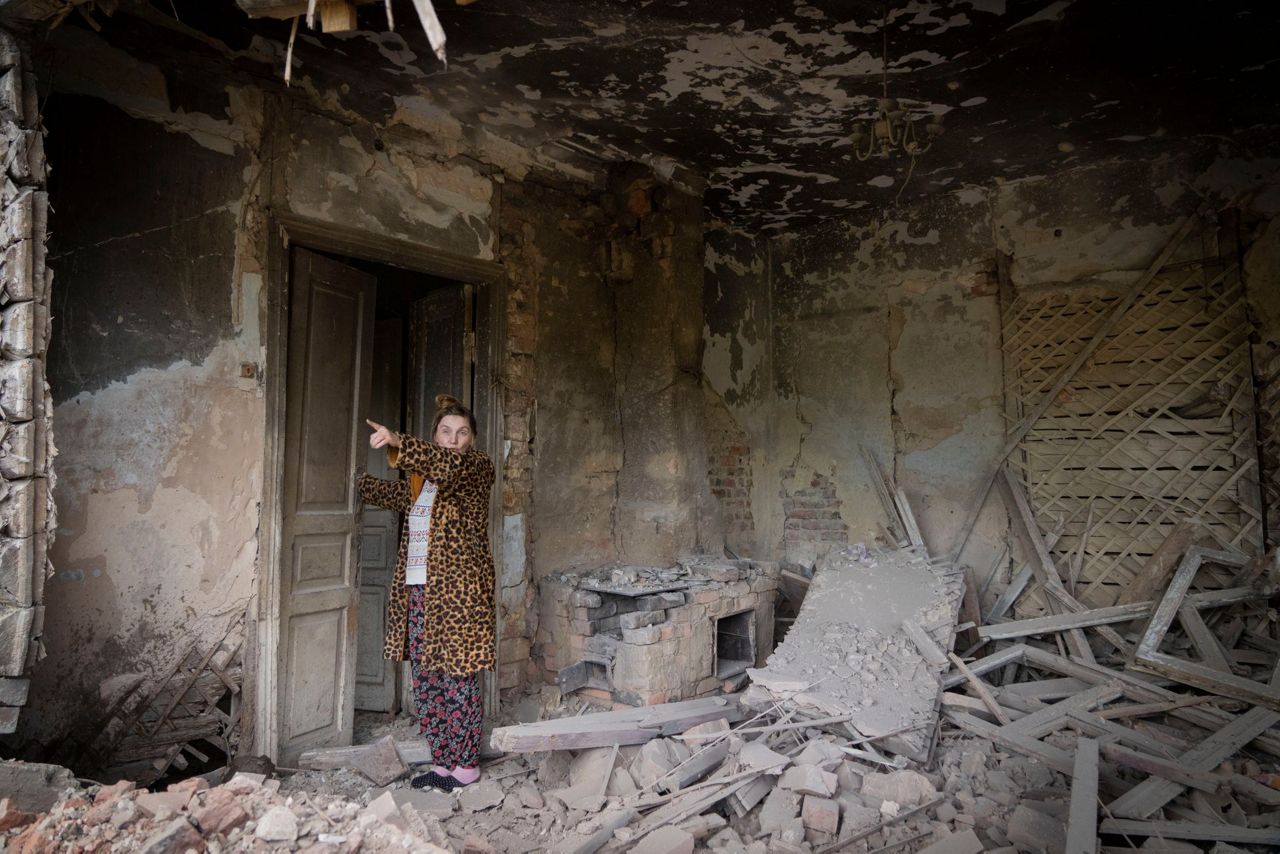 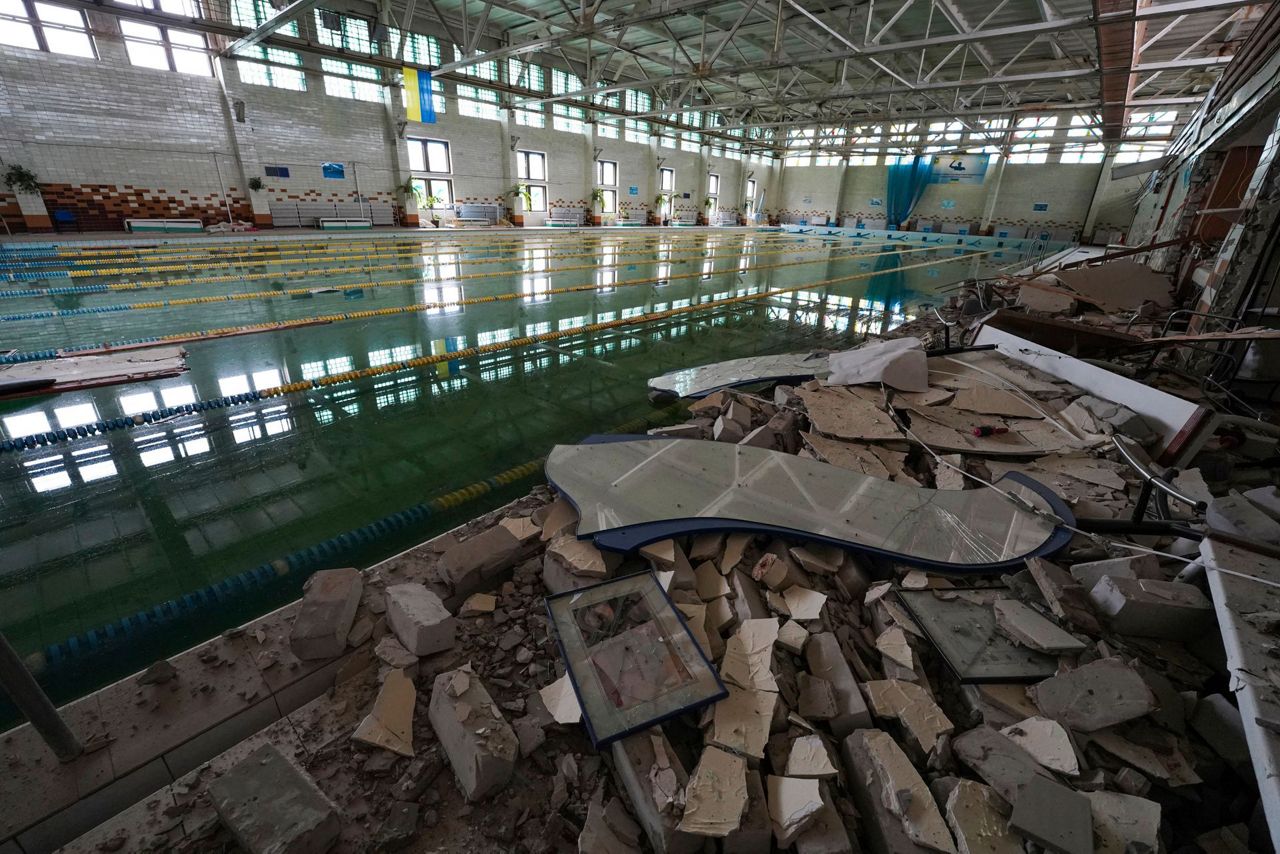 8 of 9
General view of the ruins of the sports complex of the National Technical University in Kharkiv, Ukraine, Friday, June 24, 2022, damaged during a night shelling. The building received significant damage. A fire broke out in one part but firefighters managed to put it out. (AP Photo/Andrii Marienko) 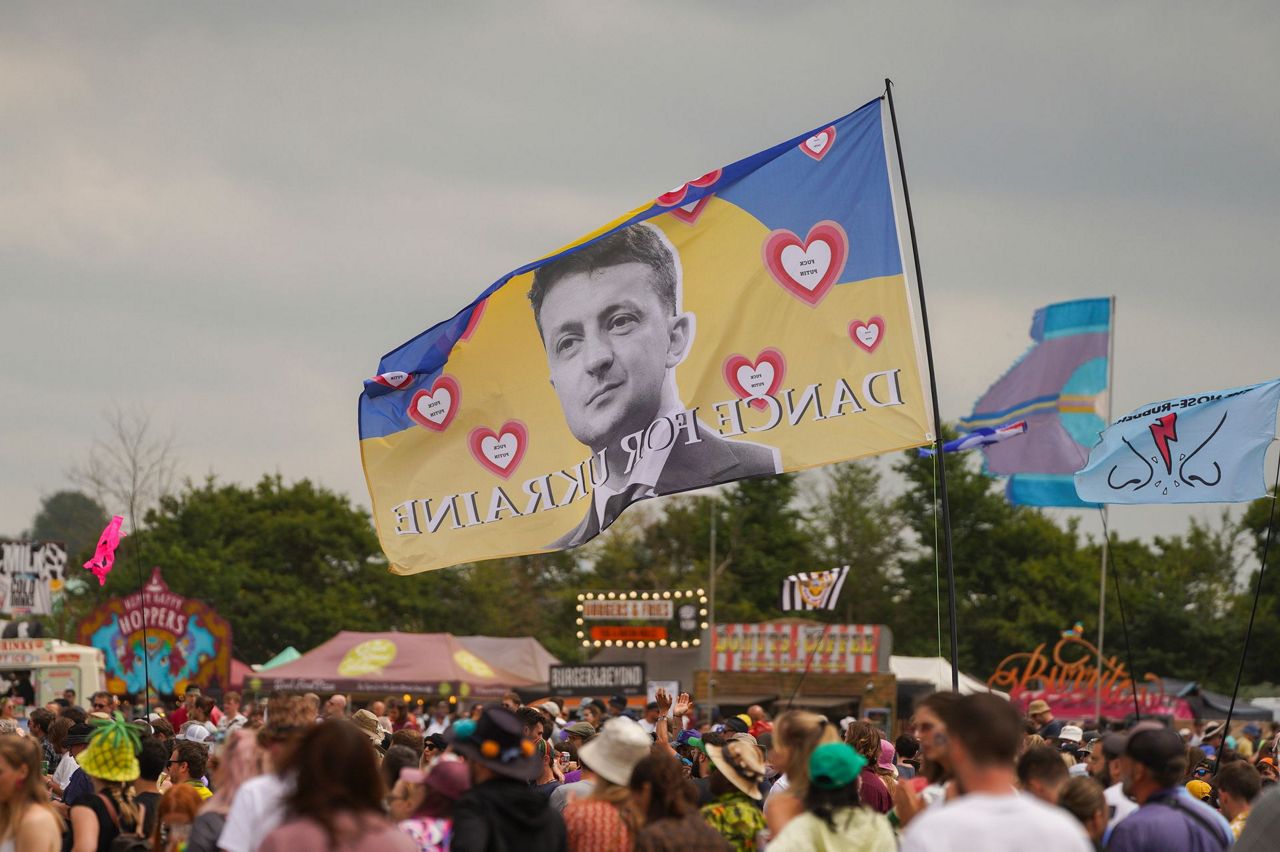 9 of 9
A flag with the image of Ukrainian President Volodymyr Zelenskyy and the words 'Dance For Ukraine' is seen at the Glastonbury Festival in Worthy Farm, Somerset, England, Friday, June 24, 2022. (AP Photo/Scott Garfitt)

KYIV, Ukraine (AP) — Russian forces were seeking to swallow up the last remaining Ukrainian stronghold in the eastern Luhansk region, pressing their momentum after taking full control Saturday of the charred ruins of Sievierodonetsk and the chemical plant where hundreds of Ukrainian troops and civilians had been holed up.

Russia also launched dozens of missiles on several areas across the country far from the heart of the eastern battles. Some of the missiles were fired from Russian long-range Tu-22 bombers deployed from Belarus for the first time, Ukraine's air command said.

The bombardment preceded a meeting between Russian President Vladimir Putin and Belarusian President Alexander Lukashenko, during which Putin announced that Russia planned to supply Belarus with the Iskander-M missile system.

Russian Defense Ministry spokesman Igor Konashenkov said late Saturday that Russian and Moscow-backed separatist forces now control Sievierodonetsk and the villages surrounding it. He said the attempt by Ukrainian forces to turn the Azot plant into a “stubborn center of resistance” had been thwarted.

Serhiy Haidai, the governor of the Luhansk province, said Friday that Ukrainian troops were retreating from Sievierodonetsk after weeks of bombardment and house-to-house fighting. He confirmed Saturday that the city had fallen to Russian and separatist fighters, who he said were now trying to blockade Lysychansk from the south. The city lies across the river just to the west of Sievierodonetsk.

Capturing Lysychansk would give Russian forces control of every major settlement in the province, a significant step toward Russia’s aim of capturing the entire Donbas. The Russians and separatists control about half of Donetsk, the second province in the Donbas.

Russia's Interfax news agency quoted a spokesman for the separatist forces, Andrei Marochko, as saying Russian troops and separatist fighters had entered Lysychansk and that fighting was taking place in the heart of the city. There was no immediate comment on the claim from the Ukrainian side.

Lysychansk and Sievierodonetsk have been the focal point of a Russian offensive aimed at capturing all of the Donbas and destroying the Ukrainian military defending it — the most capable and battle-hardened segment of the country’s armed forces.

Russian bombardment has reduced most of Sievierodonetsk to rubble and cut its population from 100,000 to 10,000. The last remaining Ukrainian troops were holed up in underground shelters in the huge Azot chemical plant, along with hundreds of civilians. A separatist representative, Ivan Filiponenko, said earlier Saturday that its forces evacuated 800 civilians from the plant during the night, Interfax reported.

Ukrainian military analyst Oleg Zhdanov said some of the troops were heading for Lysychansk. But Russian moves to cut off Lysychansk will give those retreating troops little respite.

Some 1,000 kilometers (600 miles) to the west, four Russian cruise missiles fired from the Black Sea hit a “military object” in Yaroviv, Lviv regional governor Maksym Kozytskyy said. He did not give further details of the target, but Yaroviv has a sizable military base used for training fighters, including foreigners who have volunteered to fight for Ukraine.

Russian missiles struck the Yaroviv base in March, killing 35 people. The Lviv region, although far from the front lines, has come under fire at various points in the the war as Russia's military worked to destroy fuel storage sites.

About 30 Russian missiles were fired on the Zhytomyr region in central Ukraine on Saturday morning, killing one Ukrainian soldier, regional governor Vitaliy Buchenko said. He said all of the strikes were aimed at military targets.

In the northwest, two missiles hit a service station and auto repair center in Sarny, killing three people and wounding four, the Rivne regional governor, Vitaliy Koval, said. He posted a picture of the destruction. Sarny is located about 50 kilometers (30 miles) south of the border with Belarus.

In southern Ukraine along the Black Sea coast, nine missiles fired from Crimea hit the port city of Mykolaiv, the Ukrainian military said.

In the north, about 20 missiles were fired from Belarus into the Chernihiv region, the Ukrainian military said.

Ukraine's military intelligence agency said the Russian bombers' use of Belarusian airspace for the first time for Saturday's attack was “directly connected to attempts by the Kremlin to drag Belarus into the war.”

Belarus hosts Russian military units and was used as a staging ground before Russia invaded Ukraine, but its own troops have not crossed the border.

Ukrainian President Volodymyr Zelenskyy said in his nightly video address that as a war that Moscow expected to last five days moved into its fifth month, Russia “felt compelled to stage such a missile show."

He said the war was at a difficult stage, “when we know that the enemy will not succeed, when we understand that we can defend our country, but we don’t know how long it will take, how many more attacks, losses and efforts there will be before we can see that victory is already on our horizon.”

During his meeting in St. Petersburg with Lukashenko, Putin told him the Iskander-M missile systems would be arriving in the coming months. He noted that they can fire either ballistic or cruise missiles and carry nuclear as well as conventional warheads. Russia has launched several Iskander missiles into Ukraine during the war.

Following a botched attempt to capture Kyiv, Ukraine’s capital, in the early stage of the invasion that started Feb. 24, Russian forces have shifted their focus to the Donbas, where the Ukrainian forces have fought Moscow-backed separatists since 2014.

A senior U.S. defense official, speaking in Washington on condition of anonymity, on Friday called the Ukrainians’ withdrawal from Sievierodonetsk a “tactical retrograde” to consolidate forces into positions where they can better defend themselves. The move will reinforce Ukraine’s efforts to keep Russian forces pinned down in a small area, the official said.

After repeated Ukrainian requests to its Western allies for heavier weaponry to counter Russia’s edge in firepower, four medium-range American rocket launchers arrived this week, with four more on the way.

The Ukrainian Defense Ministry released a video Saturday showing the first use of the High Mobility Artillery Rocket Systems, or HIMARS, in Ukraine. The video gave no location or indication of the targets. The rockets can travel about 45 miles (70 kilometers).

The senior U.S. defense official said Friday that more Ukrainian forces are training outside Ukraine to use the HIMARS and are expected back in their country with the weapons by mid-July. Also to be sent are 18 U.S. coastal and river patrol boats.

The official said there is no evidence Russia has intercepted any of the steady flow of weapons into Ukraine from the U.S. and other nations. Russia has repeatedly threatened to strike, or actually claimed to have hit, such shipments.

Follow AP's coverage of the Russia-Ukraine war at https://apnews.com/hub/russia-ukraine