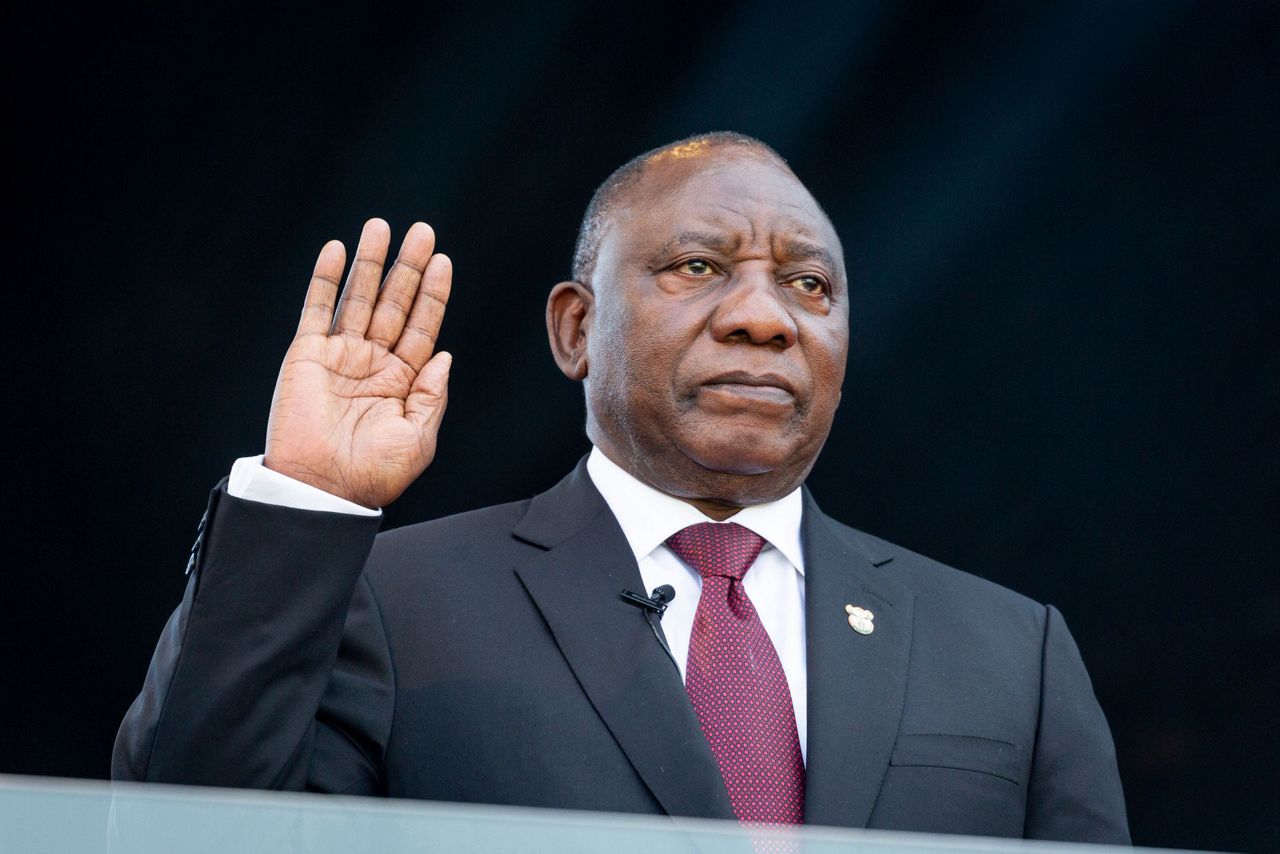 South African President Cyril Ramaphosa, right, takes the Oath of Office at the Loftus Versfeld Stadium in Pretoria, South Africa, Saturday, May 25, 2019. Ramaphosa has vowed to crack down on the corruption that contributed to the ruling ANC' s weakest election showing in a quarter-century. (Yeshiel Panchia/Pool Photo via AP)

JOHANNESBURG (AP) — South Africa's president on Wednesday named a trimmed-down Cabinet that is 50% women, making the country's one of few in the world to be "gender-balanced."

Ramaphosa cut the Cabinet from 36 ministers to 28 as he seeks to reduce the bloating under predecessor Jacob Zuma, who stepped down last year under pressure amid corruption allegations.

Fighting the corruption and mismanagement that has consumed billions of rand is the major issue facing the ruling African National Congress, whose election win this month was the weakest in its 25 years in power amid public frustration.

The ANC leadership still contains some Zuma allies, complicating Ramaphosa's efforts at reforms aimed at restoring investor confidence in the economy, the most developed in sub-Saharan Africa.

Creating jobs is another immense challenge in a country where unemployment is over 25%, and where a growing youth population that never knew the harsh racial system of apartheid that ended in 1994 is restless for a better future.

"The people who I am appointing today must realize that the expectations of the South African people have never been greater and that they will shoulder a great responsibility," Ramaphosa said in a national address that stressed the need for an "ethical" government.

The main opposition Democratic Alliance criticized the president for keeping Mabuza in what it called the first real test of Ramaphosa's tough stance on corruption. "Unfortunately, Ramaphosa placed the internal factional interests of the ANC ahead of the interests of the people of South Africa," the DA said in a statement.

One notable appointee in a Cabinet that Ramaphosa said was meant to reflect diversity was that of Patricia De Lille, a leader of the recently created opposition party GOOD, who will be public works and infrastructure minister. It was a rare instance of an opposition figure appointed as minister in South Africa.

A notable exclusion from the new Cabinet was former women's minister Bathabile Dlamini, seen as a strong ally of former president Zuma.

On the sensitive issue of land reform to help address long-standing inequality , Ramaphosa grouped departments dealing with land and agriculture under one ministry to be led by respected former parliamentary chairwoman Thoko Didiza.