GAS PRICESFind lowest gas prices in N.C. mountains
NEW PODCAST EPISODELife and career of an N.C. native who worked for four presidents and a governor
COMMUNITY CALENDARAdd An Event to Our Calendar
GET OUR APPOur Spectrum News app is the most convenient way to get the stories that matter to you. Download it here. 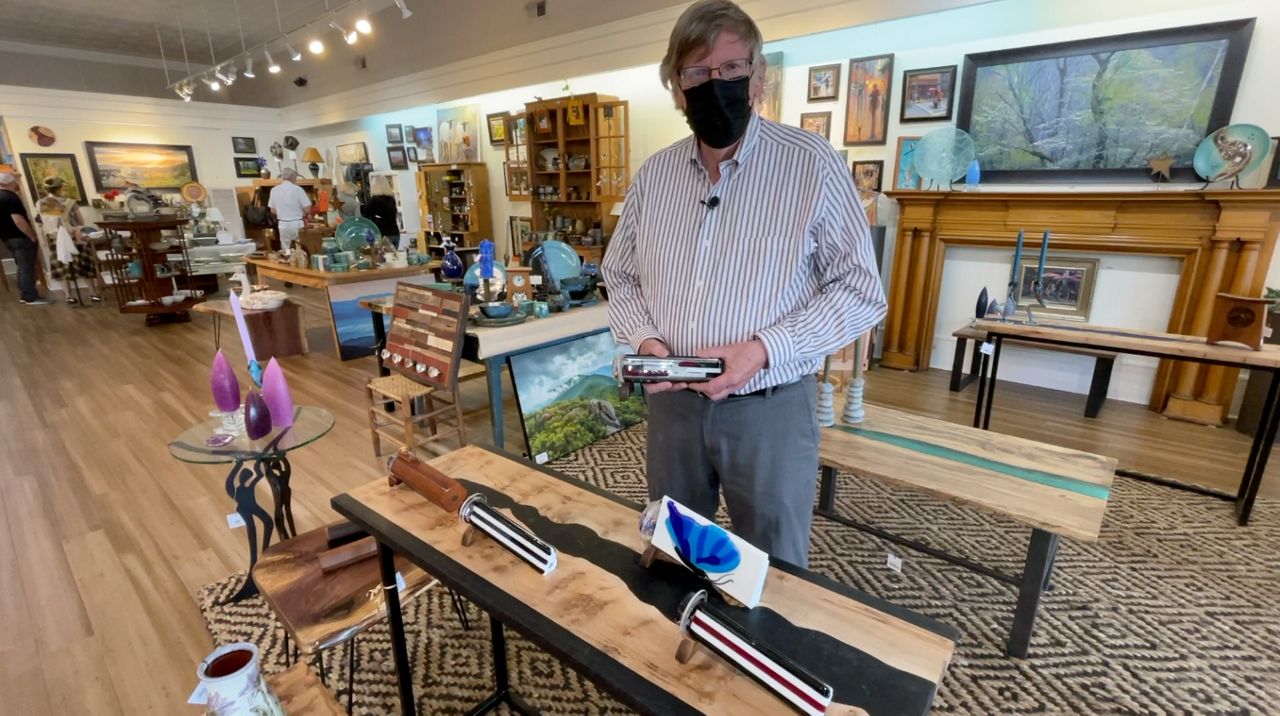 Artist Marshall Fisher at his showcase in the Seven Sisters Gallery.

BLACK MOUNTAIN, N.C. — Kaleidoscope makers are seeing a resurgence of their work in the art world. One maker in Black Mountain is excited to see it.


Artist Marshall Fisher calls kaleidoscopes a relaxing change from the constant storm of information we're all subject to, and that could be the catalyst for the recent popularity.

Fisher is one of only a couple kaleidoscope makers in the Asheville area. He was once a software engineer out of Washington D.C.

"I have a love of precision, solutions to problems and I enjoy solving problems and making a new Kaleidoscope is a constant series of problems to solve, especially if it's a design that's not been done before," Fisher said. "There's level of precision and there's also patience. I'm a patient person, and I don't mind if something I tried doesn't work the first time, I'll keep at it."

He's been a woodworker for as long as he can remember, specializing in furniture. But his interest for kaleidoscopes didn’t begin until the late 1980s. Fisher was blown away by the possibility that a kaleidoscope was more than just a cheap toy - and instead, an optical instrument.

"In 1816 they were invented by a man named Brewster in England, who was experimenting with optics in all sorts of different ways," Fisher said. "At that time they were an adult curiosity, never intended for children and never intended as toys.”

When Fisher stumbled upon one of the few kaleidoscope exhibits at that time, he immediately became interested in making them himself. Twenty-five years later, he hasn’t stopped. Fisher and his wife retired to the Asheville area in 2014.

"The Asheville area is just right for people who are interested in the arts, and interested in craft in particular. So it's been a very good move for us," Fisher said.

He often uses wood and stained glass in his unique designs, all which he creates himself. His kaleidoscopes can run anywhere from $180 to $350.

"I never get bored," Fisher said.

If he's not making kaleidoscopes, he's working on furniture and creating toys for his grandkids, or making architectural stained glass pieces. For a while, making kaleidoscopes was only ever his hobby, never a career. But now a kaleidoscope renaissance has Fisher pretty busy with his craft.

There’s been a resurgence in kaleidoscope making over the last several years due to craftsmanship and technological advances. Also, people are buying more of them and Fisher thinks it’s because they’re peaceful, nonpolitical, and an experience to enjoy during this anxiety-ridden time.

His skill is in demand. This motorcycle-riding, kaleidoscope-making grandpa has a showcase across town at the Seven Sisters Gallery in Black Mountain. Fisher called it a wonderful place to show his work.

With the resurgence in kaleidoscopes getting more people interested, the gallery is selling more of his work.

"I really am not in this as a living," Fisher said. "It's more than a hobby but less than a career. I enjoy just the process of designing and making kaleidoscopes and if I sell some that's great."

Even his grandkids are starting to get into the craft of kaleidoscope-making. You can check out more of Fisher's work at Seven Sisters Gallery or you can visit his website here.