The Gulf of Maine is warming at an alarming rate

The Gulf of Maine, stretching from Cape Cod to Nova Scotia, is famous for its renowned lobster production but more recently, it has gained worldwide attention for another reason: rapid warming.

The Gulf of Maine has experienced its warmest 5-year period (2015-2020) in recorded history and is now one of the fastest warming bodies of water on the planet.

It is warming faster than 94.3% of the world's oceans, according to Adam Kemberling, who is a research technician at the Gulf of Maine Research Institute.

Kemberling's research focuses on how changes in regional weather, current and climate patterns impact the Gulf of Maine.

A detailed look at the warming

Kemberling said the Gulf of Maine has warmed at a rate of 0.73 degrees per decade since the 1980s.

Three-quarters of a degree doesn't seem like a lot, but it's actually astronomical. For comparison, that is around 2.6 times faster than the global rate of 0.27 degrees per decade.

This year has been particularly noteworthy. June 2021 was the hottest June on record (dating back to 1981) for the Gulf of Maine with water temperatures being 4.72 degrees warmer than the climate average for the month.

Another warming concern is the recent heatwaves that have occurred in the Gulf of Maine. A marine heatwave is defined as a period when water temperatures are in the top 10% of warmest average temperatures for more than 5 days. 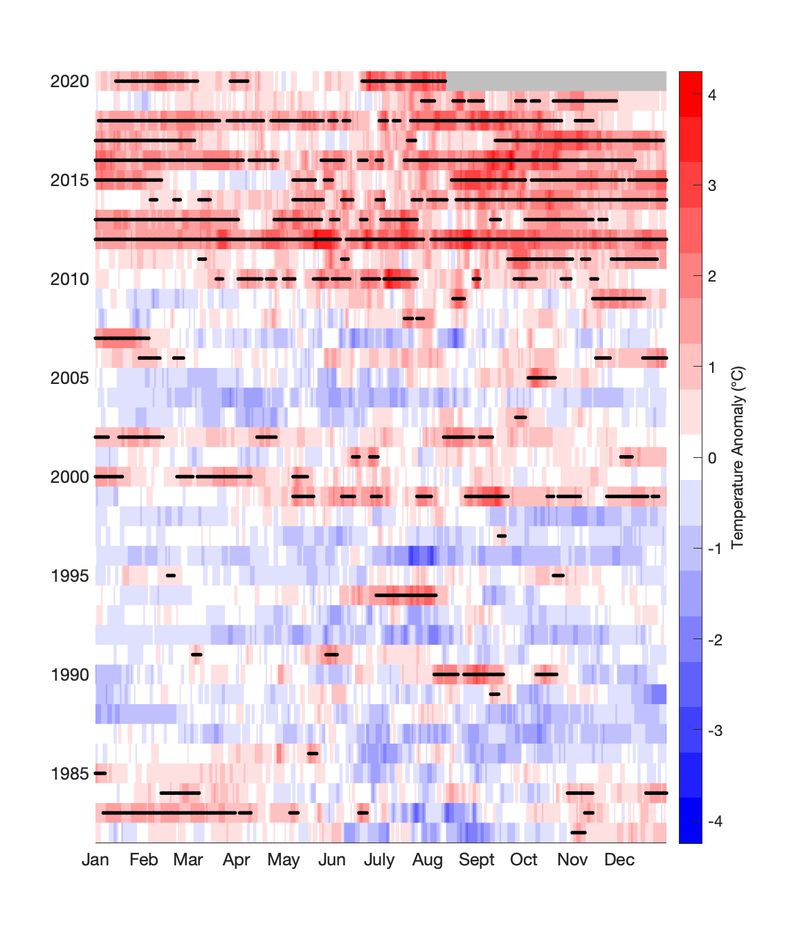 A look at recent heatwaves. Black dots indicate heatwaves. Each row is a year, and the color indicates whether the day is above (red) or below (blue) the average. (Gulf of Maine Research Institute)

In 2020, the warmest single-day water temperature was recorded for the Gulf of Maine on August 14 with an average temperature of 69.37 degrees. 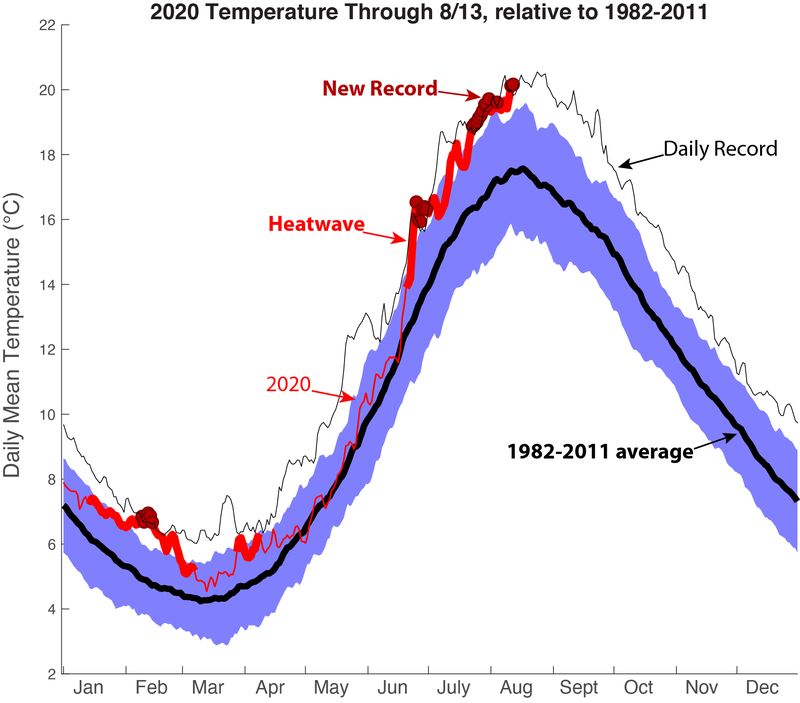 Gulf of Maine annual cycle of sea-surface temperatures. The thick black line is the 1982-2011 average. The blue region is the range over that period. The red line is the temperature for 2020. Thick red lines indicate heatwave periods. The dark red circles are daily records set in 2020. (Gulf of Maine Research Institute)

A look at what's causing the warming

You’re probably wondering what is causing such rapid warming of the Gulf of Maine waters. That is a good question, and one scientists continue to research.

There are several factors contributing to the drastic warming of the Gulf of Maine. A few of those factors include increasing air temperatures and changing ocean circulation patterns as ocean salinity and temperatures change.

Kemberling said "the patterns of persistent increases in temperature in the Gulf of Maine and globally are expressive of more thermal energy in the oceanic/atmospheric system due to climate change."

The questions around the rate of rapid warming of the Gulf of Maine is more complex. Kemberling said "the reasons of why the Gulf of Maine is warming faster than the rest of the world is likely related to the dynamics of the North Atlantic and this question is still being answered."

A likely factor, according to Kemberling, is the northward shift in the Gulf Stream, which is also driven by climate change. While the Gulf Stream doesn't directly enter the Gulf of Maine, it is associated with reduced transport of cold water southward on the continental shelf along Nova Scotia. 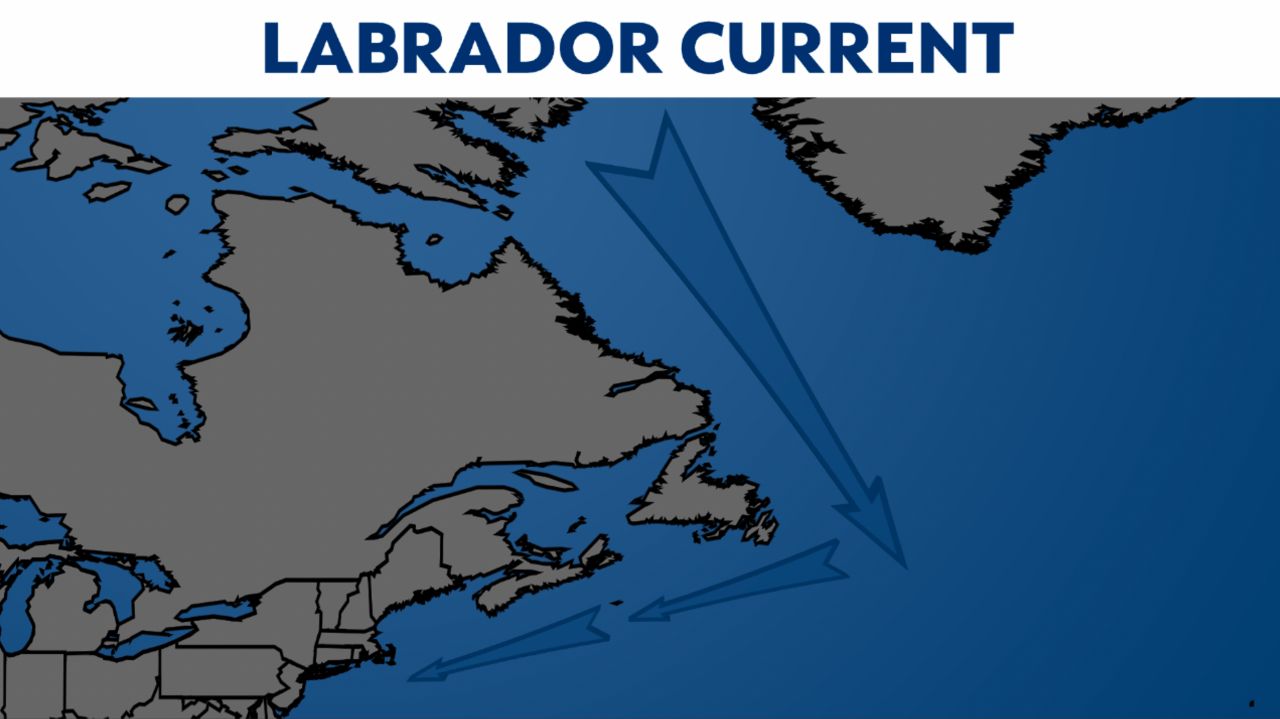 This, paired with anomalously warm air temperatures, has likely contributed to several of the warmest years in the Gulf of Maine.

Over the last 40 years, the average annual temperature for the Gulf of Maine has warmed from 49.9 degrees to 52.5 degrees. The Gulf of Maine is expected to warm as much as an additional 4.3 degrees by 2050.