The Passamaquoddy Water District in Eastport manages the water system for about 1,400 customers in the city and at Pleasant Point. (Photo by Susan Cover/Spectrum News Maine).

Noela Altvater is just 19, but she’s taking action to improve the quality of water for the Passamaquoddy who live at Pleasant Point.

Growing up on the tribal lands just outside of Eastport, she was told again and again not to drink the water from the tap. She suffered rashes and skin problems. The water was yellow or brown. It stained the shower and the toilet.

“That was embedded in me as a child, that the water is just bad,” she said. “Water is bad. Don’t drink it.” 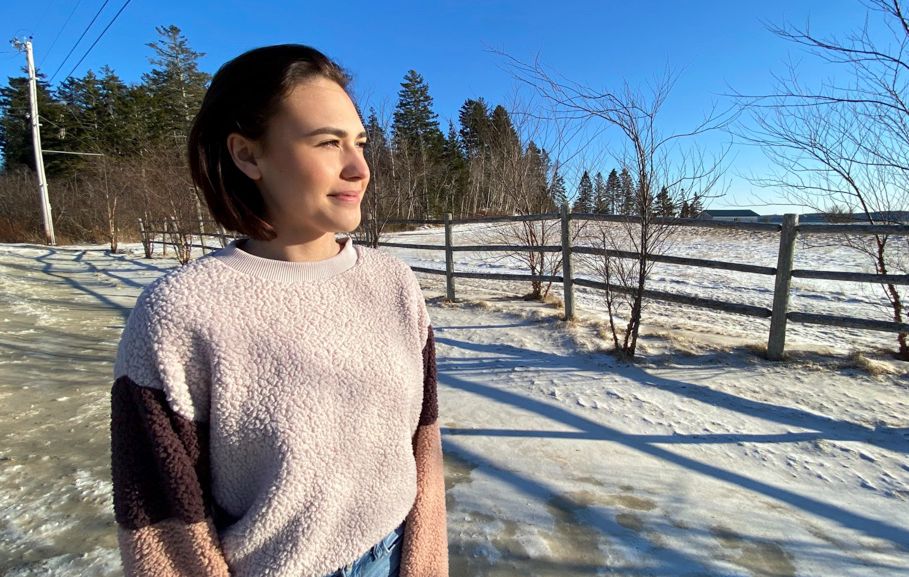 Noela Altvater, 19, is a college student and activist who was warned as a child not to drink the water in her home at Pleasant Point. (Photo by Susan Cover/Spectrum News Maine).

To help draw attention to the issue, Altvater created an online story called “Sipayik’s Water Crisis.” She’s also watching the progress of bills at the Legislature, including LD 906 “An Act to Provide Passamaquoddy Tribal Members Access to Clean Water.”

For years, people have complained about the color and smell of the water at Pleasant Point. More concerning, following quarterly tests, the Passamaquoddy Water District occasionally sends out notices about high levels of a chemical that has been linked to cancer.

The water district, which serves about 1,400 people in Eastport and Pleasant Point, last sent out a notice about high levels of trihalomethanes in the water in October 2019. The notice lists possible health effects: “some people who drink water containing trihalomethanes in excess of the (maximum contaminant level) over many years could experience liver, kidney and central nervous system problems and an increased risk of cancer.”

“We have bad times of year,” said Ann Bellefleur, business manager for the district. “I agree it’s not the best, but there is nothing else at the moment.”

The bill would make the water district tax exempt, which is the same status as all other water districts in the state, said tribal attorney Corey Hinton. It also would allow the tribe to put two parcels of land in a federal trust to help with future water acquisition. Lastly, the bill would allow the tribe to regulate its own water in consultation with the federal government, like other tribes across the country.

Hinton said the bill is designed to stand alone, regardless of what happens to the larger — and potentially more controversial — bills that rewrite the 1980 Maine Indian Claims Settlement Act.

“This issue of drinking water is a public health issue,” he said. “Drinking water should be nonpartisan. It’s a human right.”

On Monday night, at a special meeting of the water district board of trustees, members of the panel said they felt blindsided by the proposed legislation. The five-member board consists of three tribal members, a representative of Eastport and one from Perry. They had hoped to take a position on the bill in advance of the Thursday work session by the Legislature’s Judiciary Committee.

A sign along County Road heading out of Eastport lets drivers know they have entered Sipayik, the Passamaquoddy word for Pleasant Point. (Photo by Susan Cover/Spectrum News Maine).

“If there’s going to be changes to the charter, it should be brought through us,” said Randy Newcomb of Perry. “It blew me away that major changes are coming and we weren’t notified.”

Water district trustee Mary Daigle, who represents the Passamaquoddy, handed out information sheets to try to answer questions. She also compiled a list of questions for a follow up meeting of the board on Wednesday.

She said regardless of the outcome of the legislation, she hopes to see improvements in the water soon.

“I know my water is bad,” she said. “It smells bad. It looks bad. One way or the other, I’d like to be able to cook with my water.”

Board members said Eastport doesn’t have problems to the same extent as the Passamaquoddy because of the location of the treatment plant. Also, the city bleeds its lines regularly and the water circulates more frequently because of increased demand in the city.

Sometimes the water “doesn’t look pretty,” said Eastport City Manager Kate Devonshire, but she drinks it. She said she too needs more information about LD 906 before taking a position on it. If the water district becomes tax exempt, the city would lose about $43,000 a year in revenue.

“What it boils down to is, what’s good for the whole city?” she said.

Many of them said it’s long past time for the water problem to be fixed.

Lisa Sockabasin, a Passamaquoddy citizen and co-leader of Wabanaki Public Health and Wellness, told lawmakers at the public hearing that she and others haul “hundreds and hundreds of gallons of water each week to tribal citizens in need.” She said Mainers are likely familiar with the idea of generational poverty or generational wealth and she had one more to add to the list.

“Have you ever heard of living with a generational water crisis?” she asked members of the Judiciary Committee. “Where generation after generation, people experience dirty water coming from their faucets. Where young children grow up without access to clean drinking water and elders struggle to haul water into their homes.”

Last year, the Maine Center for Disease Control and Prevention planned to install a carbon treatment system to improve water quality. But supply chain issues related to COVID-19 delayed the work, which is now set to be completed in June.

Nancy Beardsley, deputy director of the Maine CDC, told lawmakers in February that the problems with the water are two-fold. One is that it comes from shallow Boyden Stream Reservoir, which has “high natural organic content.” To disinfect the water, chlorine is added and sometimes, the biproducts produced by the chlorine exceed safe water standards.

In her testimony, Beardsley said the proposed legislation may not be necessary because she believes the system upgrades will make a big difference.

“We have high expectations that this project will result in significant improvements to water quality within the Pleasant Point distribution system and throughout the entire Passamaquoddy Water District’s distribution network,” she wrote.

Altvater, a student at Washington County Community College, said she plans to stay active to make sure the water problems get fixed. She worries about people who don’t drive or may not have the money to purchase water.