Rent board ruling a step forward for Portland tenants’ union

After scoring a small victory with the city of Portland against their landlord for improperly raising rent in their building, Wes Pelletier and Matt Walker are discovering that the new tenants’ union they created is having an impact.

“It’s a sign that everyone should be in a tenants’ union, because doing this work as individuals would be impossible,” Pelletier said.

Tenants’ unions have little to no legal standing, according to one expert, but they do provide a safety-in-numbers solidarity that can empower individuals to stand up to what they feel are unfair practices, as Pelletier and Walker did.

Their efforts led, in part, to the Portland Rent Board ruling in favor of tenants of 657 Congress Street, otherwise known as the Trelawny Building, in a meeting on Feb. 9. The board voted 5-2 to recommend the city’s Housing Safety Office issue fines totaling more than $15,000 to the building’s landlord, Geoffrey Rice.

In its discussion, the board cited testimony and a trail of paper and electronic communications provided by Pelletier and Walker, acting on behalf of the Trelawny Tenants’ Union, as factors in their decision.

“I think that they’re justified in seeking some recourse,” board nember Christopher Moore said.

The most notable figure connected with the Trelawny Tenants Union is former Portland Mayor Ethan Strimling, who was a leading figure in the formation of the union. Strimling is involved in a lawsuit against Rice that alleges the building owner tried to illegally evict him.

Strimling, who declined to be interviewed for this story because of the ongoing lawsuit, wrote the following on his Facebook page: “My individual case, and its impact on the rights of tenants to organize and challenge the illegal tactics of landlords, will ultimately be decided by the court. However, what’s not on trial, but is at the core of this case and so many others, is the immoral practice of no-cause evictions in Maine.”

Rice’s Portland-based attorney, David Chamberlain, declined comment on behalf of his client about the Strimling case, which has been continued until April. Chamberlain did not respond to a request for comment regarding the rent board’s decision.

Pelletier, 31, is a software developer who has lived in the building for almost five years. Walker, a 38-year-old geophysicist, moved into the building in August 2021 after being evicted from another building, which he said was retaliation for complaining.

“They were mad at me for being uncomfortable with the rats and the trash,” he said. 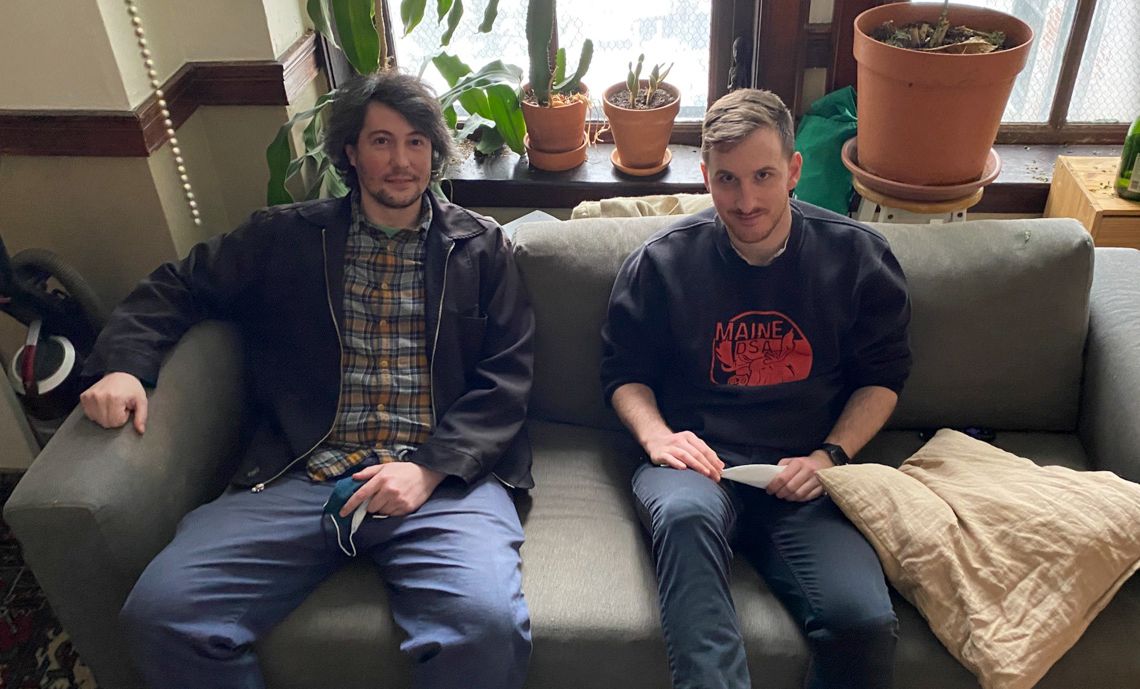 Matt Walker, left, and Wes Pelletier in the living room of Pelletier’s apartment at 657 Congress St., also known as the Trelawny Building. Both men have apartments in the building and are leaders of a tenants’ union they created to speak on behalf of the buildings’ residents in disputes with their landlord. (Photo by Sean Murphy/Spectrum News Maine).

Fears of retaliation over a dispute on rising rent were a big part of what led Pelletier to first organize the union in April 2021. Today, the union counts about 60 tenants in the building as members, a sizable amount considering the building has a little over 100 units.

Pelletier said individual tenants and the union spent months communicating with Rice over the issue, especially once many tenants heard in May 2021 that their annual leases were being transferred to monthly leases, a move Pelletier took as a precursor to eviction.

“None of our leases were being renewed,” he said.

Around that time, the union got 50 tenants to sign a letter asking why. Pelletier said they heard nothing back. Instead, Pelletier said, tenants started getting notices that rents were going up, despite Portland issuing a rental freeze through 2021 due to the economic impacts of the pandemic. At the same time, he said, Strimling and one other union organizer got eviction notices.

How much power do unions have?

The concept of a tenants’ union is fairly new in Maine. City officials were unable to provide any context about legal standing for tenants’ unions, and Pine Tree Legal, a nonprofit legal-aid service, did not respond to multiple requests for comment.

Even Pelletier and Walker acknowledged that they weren’t sure what, if any, legal powers a tenants’ union possessed in Maine.

“I would love a better definition,” Pelletier said.

Both in California and nationwide, Singh said, tenants’ unions typically exist in larger cities, but they vary in scope and organization, making tracking exact numbers of unions difficult.

“It can be one building, it can be a citywide organization, or anything in between,” she said.

The principle, Singh said, is very similar to that of a workers’ union, but from a legal standpoint workers’ unions have access to protection and government support through bodies like the National Labor Relations Board that tenants’ unions don’t have.

“There aren’t really protections for tenants’ unions like there are for labor unions,” she said.

Singh said a group of tenants can often pool resources to hire attorneys that individuals may not be able to afford. The other benefit, she said, is solidarity of a group acting together. An organized group can empower the individual to stand up to a potentially illegal action taken by a landlord.

“The landlord’s going to try fewer tricks when they know that people are behind you and watching you,” she said.

Pelletier and Walker both said the Trelawny Tenants Union is here to stay. They interact via online chat, conduct regular meetings via Zoom or in the lot behind the building.

Whether Rice ultimately pays the fines the board recommended or not, Strimling did share his thoughts on the board’s decision on Facebook and praised the union for its work.

“All of this came about because a group of courageous tenants joined together to form a union and stand up for their rights,” Strimling wrote.

Walker said unions like his will help put a stop to unfair practices that individual tenants might have ignored or decided not to fight.

“I think they just ran into a group that’s not going to take it,” he said.