The city of Westbrook heralded the return of its beloved ice disk via social media on Tuesday. By Wednesday, visitors were already flocking to the phenomenon in the Presumpscot River. (Photo by Annie Ropeik/Spectrum News Maine)

They came from miles around to catch a glimpse of “the phenomenon.” Word had traveled fast on social media, and now, despite frigid temperatures and icy sidewalks, curious people dotted the riverbank and the edges of parking lots in downtown Westbrook.

It would have been hard to miss what they were there to see: a huge disk of ice, as wide as a football field, standing out within the frozen Presumpscot River just below Saccarappa Falls.

Hundreds of people shared the city’s Facebook posts about the disk. By Wednesday morning, a steady stream of visitors was stopping by the river to see it, some for the first time.

Newcastle resident Andy Graham called the disk a “natural wonder.” He stopped in Westbrook en route to work in Portland to take in the view from atop a riverside parking garage. 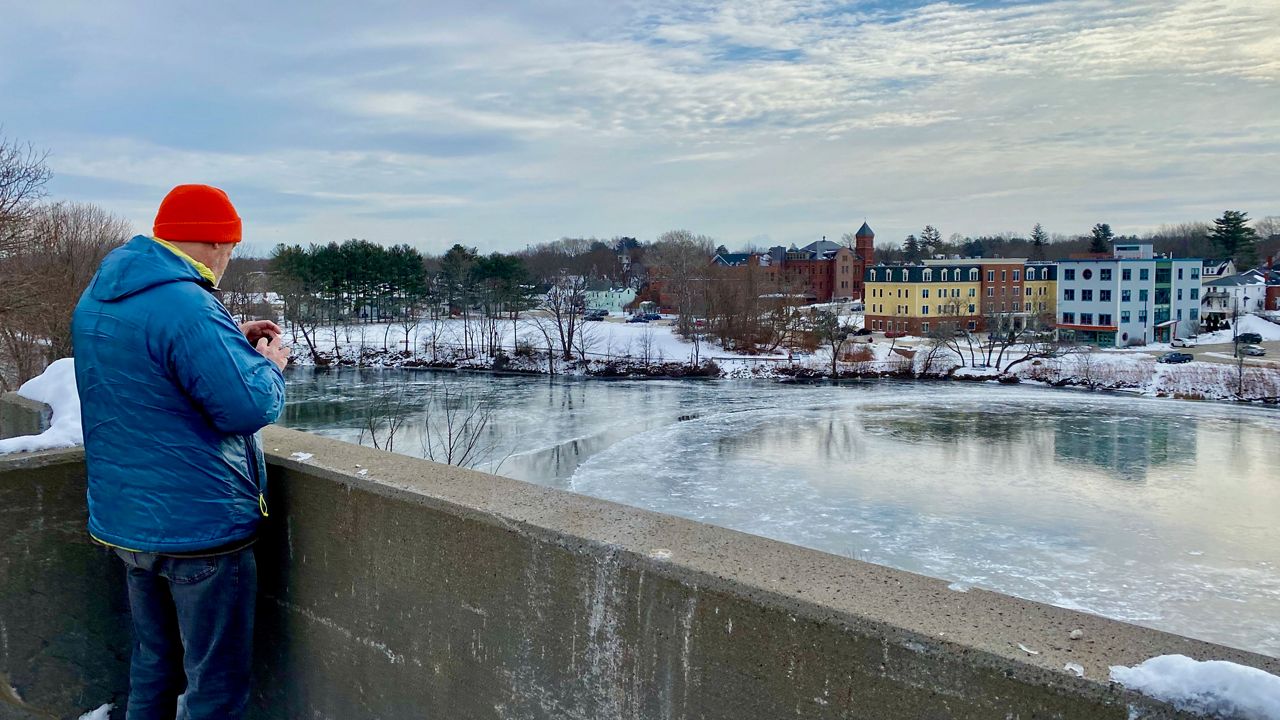 Andy Graham stopped in Westbrook on his way to work this morning to check out the newly formed 2022 ice disk. (Photo by Annie Ropeik/Spectrum News Maine)

“It’s a phenomenon, and we have precious few these days that are benign,” Graham said.

He hadn’t seen the disk in person in 2019 and wasn’t disappointed this year, though he noted it appeared more frozen to the surrounding river Wednesday than last time, when it spun visibly.

“I’m also amused to see that the gulls have found a particular spot that they like,” he said, watching a group of birds sitting together peacefully on one side of the circle. “I wonder what it is about right there that makes it attractive to them.”

Falmouth resident Genevieve Polifroni and her teenage son Jack were checking out the disk from the city river walk off Main Street.

“It’s amazing, the fact that the river does that,” Polifroni said. “I didn’t realize it could happen again. I thought it was just sort of a freak occurrence.”

She said they saw the disk in 2019 and hadn’t known it was back Wednesday when they stopped in Westbrook to see if it had reformed.

“You can already see the way the river’s starting to carve out around the disk there,” Jack Polifroni said. “It’ll be interesting to see if it breaks free and starts spinning again.”

Nearby, George Beaulieu of Buxton was setting up a drone to photograph the disk from above as he did in 2019. “It’s just something kind of fascinating,” he said. “Something local.”

Kathy Sawtelle was outside her apartment building, which overlooks the disk, as people came and went with drones and cell phone cameras. She laughed and groaned with her friends about the prospect of more crowds, traffic and overflowing parking lots like the disk prompted in 2019. 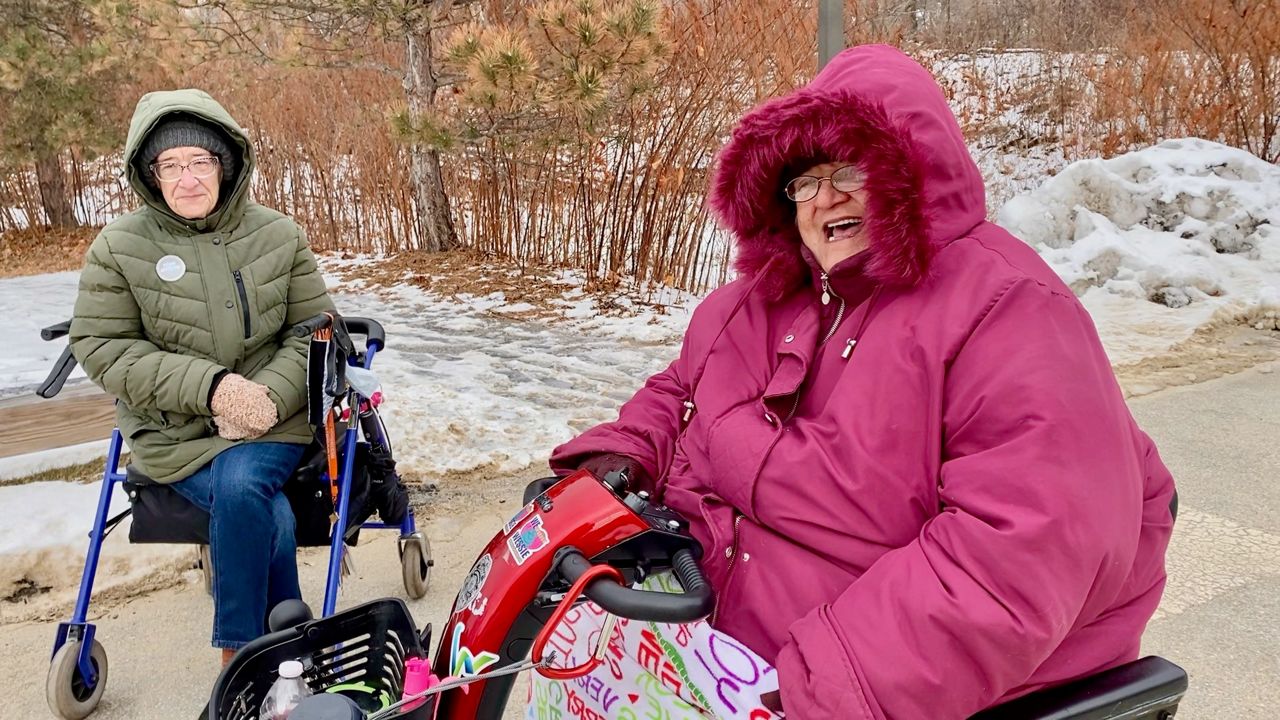 Kathy Sawtelle, right, has a front-row seat of the ice disk from her Westbrook apartment. (Photo by Annie Ropeik/Spectrum News Maine)

“It was a pain. It was fun, but it wore old after a while,” she said. When her son told her Tuesday that the disk was back, she said, “I don’t want it!” and joked to him not to spread the word.

But she and her neighbors — seasoned disk-watchers given their proximity — don’t think the circle of ice looks like it’s here to stay just yet.

“When it happened three years ago, I watched it from my living room window,” Sawtelle said. “It started (smaller) and kept growing. This time it’s like the outer edge. There’s no center to it.”

The disk won’t spin if it’s frozen to the river around it, making it harder to maintain its clear circle shape. But temperatures that are too mild could cause it to melt away. The phenomenon is rare but not unheard of, and scientists had many theories about its formation back in 2019.

Whatever happens this year, any time with the beloved ice disk is a joy for Westbrook residents like Erica Hannon, who spent time on the river walk Wednesday trying to get a good picture.

You can view the ice disk for as long as it lasts from various public spots in downtown Westbrook. Try the public lot and river walk behind 849 Main Street, or park in the garage at 50 Dana Court and walk out onto the top level for a different view.