Rae-Ann Demos shut down the animal shelter in Waterville earlier this year because of a ringworm outbreak in the cat population.

As a state animal cruelty investigator, it was her job to inspect shelters to make sure they were in compliance with state law.

“When we closed them down it was the ringworm issue and there were some other things going on in the building, like their cleaning protocols just weren’t up to par,” she said.

Fast-forward several months and now Demos, 45, is in charge of the Humane Society shelter that serves the Waterville area, following a career change in October. Staffers say she’s already made improvements. 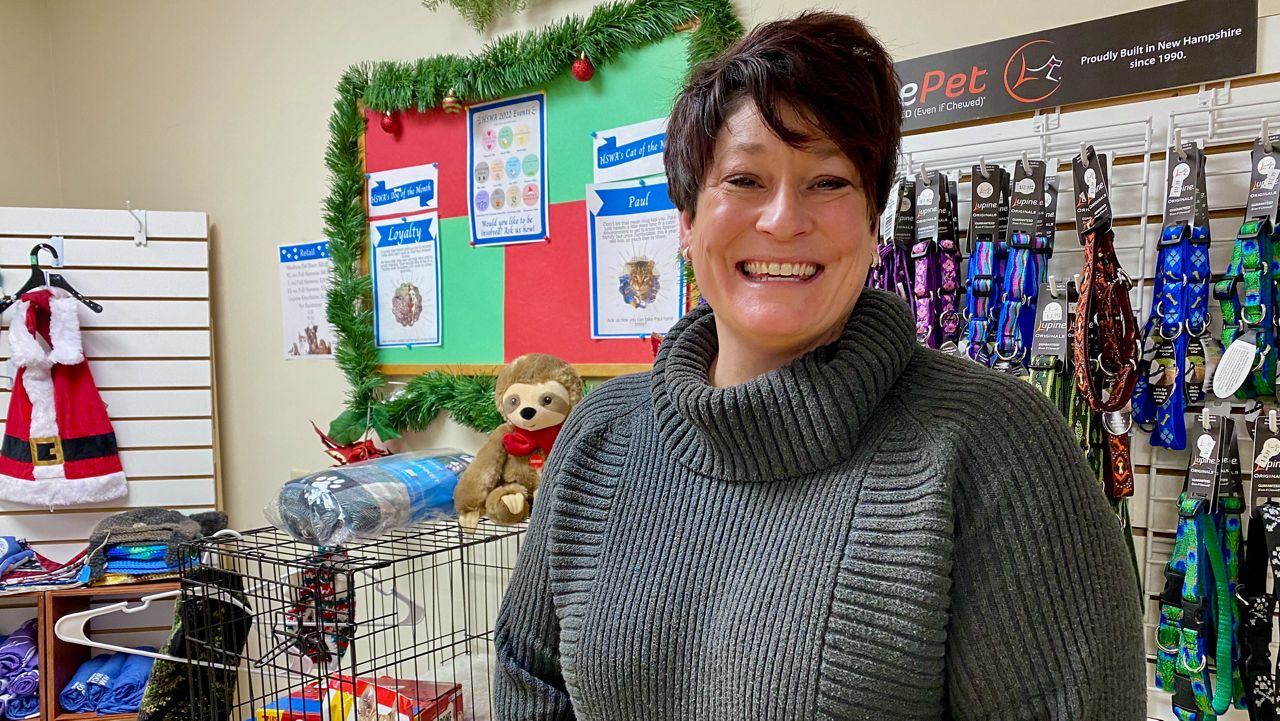 Humane Society Waterville Area Executive Director Rae-Ann Demos took over at the shelter in October and has big plans for the upcoming year. (Photo by Susan Cover/Spectrum News Maine)

“We were very overpopulated not that long ago,” said Serena Taylor, an animal care technician. “We’ve really come a long way. The way the community views us has changed a lot as well.”

When Demos started, there were 147 cats at the shelter – now there are 25. They currently have about 15 dogs. The shelter contracts with 21 area towns, about six fewer than when Demos took over.

“It was too much,” she said. “Capacity to care is something that shelters are starting to look at. You can’t continuously fill your shelter if you don’t have the capacity to care for them.”

For Demos, the job is a welcome change that gives her a chance to draw on her experience in the military and with the state. She’s working to empower staff to pitch ideas for new programs and wants to rebuild the shelter’s relationship with the community.

“I had been with the state for almost 15 years investigating animal cruelty complaints,” she said. “To be honest, I was pretty burnt out. It takes quite a toll on your mental (health) seeing sick animals and abused animals all the time.”

A 1995 Cony High School graduate, Demos studied graphic arts at Central Maine Technical College, but then grew restless. She joined the Army and received training to be a veterinarian technician. She served two tours – one at Lackland Air Force Base in San Antonio where she worked at a boot camp for 700 military working dogs and later in Grand Forks, North Dakota, where she worked at a veterinary clinic for two years.

By then she had children, so she decided it was time to move back home to Maine, where she landed a job with the state’s animal welfare program. 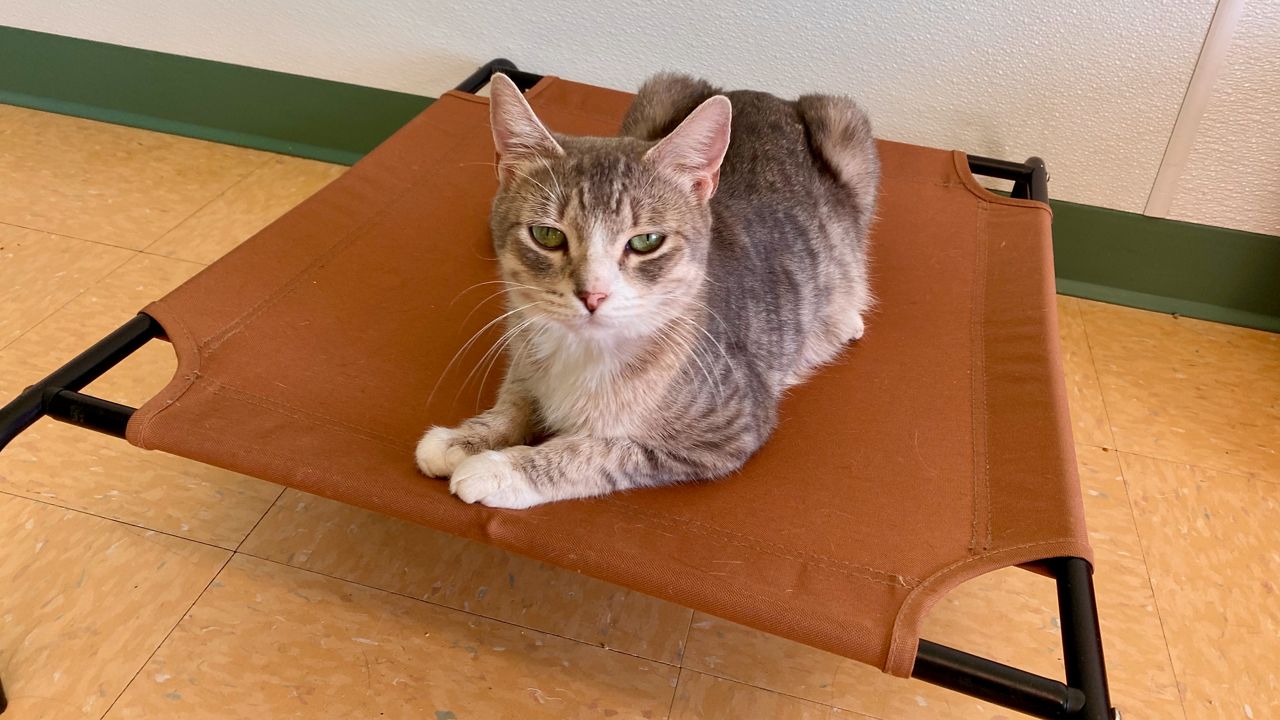 A cat named Sylvia is ready to be adopted from the Humane Society Waterville Area. (Photo by Susan Cover/Spectrum News Maine)

Now a little over two months into her job, Demos has changed how dogs and cats are processed when they first arrive at the shelter and she has revamped cleaning protocols. Those changes to the cleaning protocols proved difficult at first, she said.

“They had been doing something the same way for eight years and it wasn’t working,” she said. “They were actually cleaning too much.”

Demos retrained the staff to spot clean, rather than regularly sanitize, the room where sick cats are housed. That’s because it takes about 24 hours for a cat to leave its scent, an important part of feeling at home.

“Within a week, we saw a huge turnaround in that room,” she said. “Cats that were doing very poorly all of a sudden came back and are doing really well. We have no sick animals here.”

When it comes to her 12 employees, Demos is encouraging them to follow through on ideas. One started a “working cat” program to give hard-to-handle felines something productive to do. Three of them are now stationed in the shelter’s garage on official mousing duties. A previously unsocialized Siamese has made great strides, she said.

Ashley Marchand, director of canine operations, runs the shelter’s Doggie Day Trip Program and another called Slumber Pups, which allows people to take a dog home for the holidays. She said continued community outreach is key.

“The shelter runs off donations and the community keeps this place going,” she said. “We are working with the community, showing them we are here. We are here for the animals.” 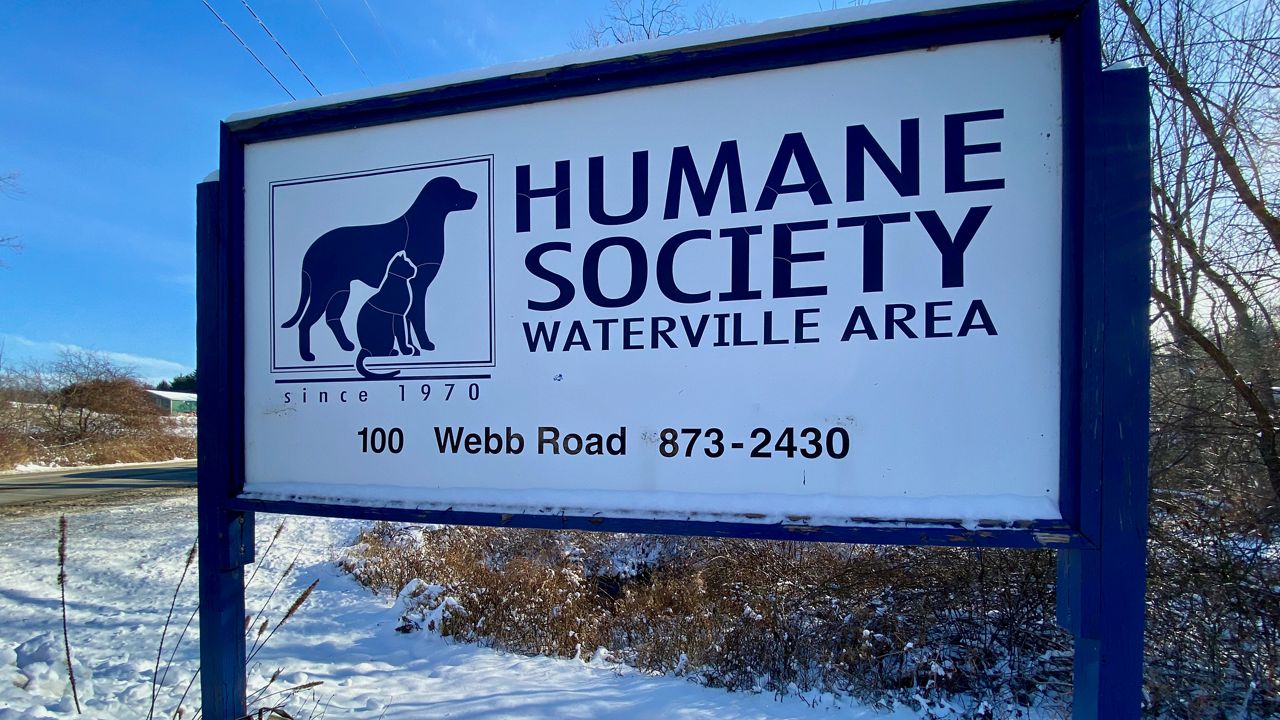 Looking to adopt a dog or cat? The Waterville animal shelter has you covered. (Photo by Susan Cover/Spectrum News Maine)

In the new year, Demos will need to raise money to replace a transport van that’s in “poor, poor shape” and find funds for a new water softening system because the hard water is ruining the shelter’s washing machines, she said.

Tiffany Lowe, guest services and volunteer coordinator, said the shelter often gets calls from people who need to have their pets spayed or neutered. She hopes the shelter can set up its own program in the new year to help meet demand. And with 25 volunteers on her roster, she could always use more.

“We actually have pretty big plans in the new year,” she said. “We’re going to have one event every month. I know people in the community are really engaged.”