Central Maine Power corridor opponents called on the state to suspend permits for the project during a Thursday rally in Augusta. (Photo by Susan Cover of Spectrum News Maine)

Opponents of the Central Maine Power corridor gathered outside the Augusta headquarters of the Department of Environmental Protection Thursday to call for the immediate suspension of the power company’s permit to build transmission lines on land in northwestern Maine.

Led by the Natural Resources Council of Maine, about 75 people waved home-made signs saying “Honor the People’s Vote” and “We said No!” a reference to the passage of Question 1 earlier this month. About 60% of Maine voters supported a ballot question to ban the project, although the company has continued work despite the vote.

“Sixteen days ago, the people of Maine sent as strong a message as you can possibly send that the CMP corridor should be terminated,” said Pete Didisheim, advocacy director for NRCM. “Voters in every part of the state voted yes on Question 1, including 15 of our 16 counties.”

“Despite the best efforts of the fossil fuel companies to spread disinformation about the NECEC, this project remains critical in the fight to combat the climate crisis in Maine and New England and is vital to our economic and renewable energy future,” Dickinson said in a statement. “This project is fully permitted and we will continue to advocate for the jobs of hundreds of Mainers while the appeal process plays out.”

Thursday’s rally comes just days before a Monday hearing at DEP, where Commissioner Melanie Loyzim will take additional comments about the project in light of the citizen vote. In a letter issued after the vote, Loyzim wrote that state law allows a commissioner to “revoke or suspend a license upon making certain findings.”

“I have determined that the referendum result, if certified such that it will become law, represents an additional change in circumstance that may require suspension of the NECEC order,” she wrote.

On Thursday, the department released a statement saying that Loyzim knows the public is anxious for a decision, but that she must follow rules laid out in state law. At the hearing on Monday, she will listen to evidence that addresses how the vote “might affect construction of the project on the permitted route” and potential rerouting options.

“After a thorough review of the evidence presented, Commissioner Loyzim is committed to issuing a decision promptly,” according to the department’s statement.

On Monday, the Secretary of State released the official results and sent them to Gov. Janet Mills, who has 10 days to certify them. 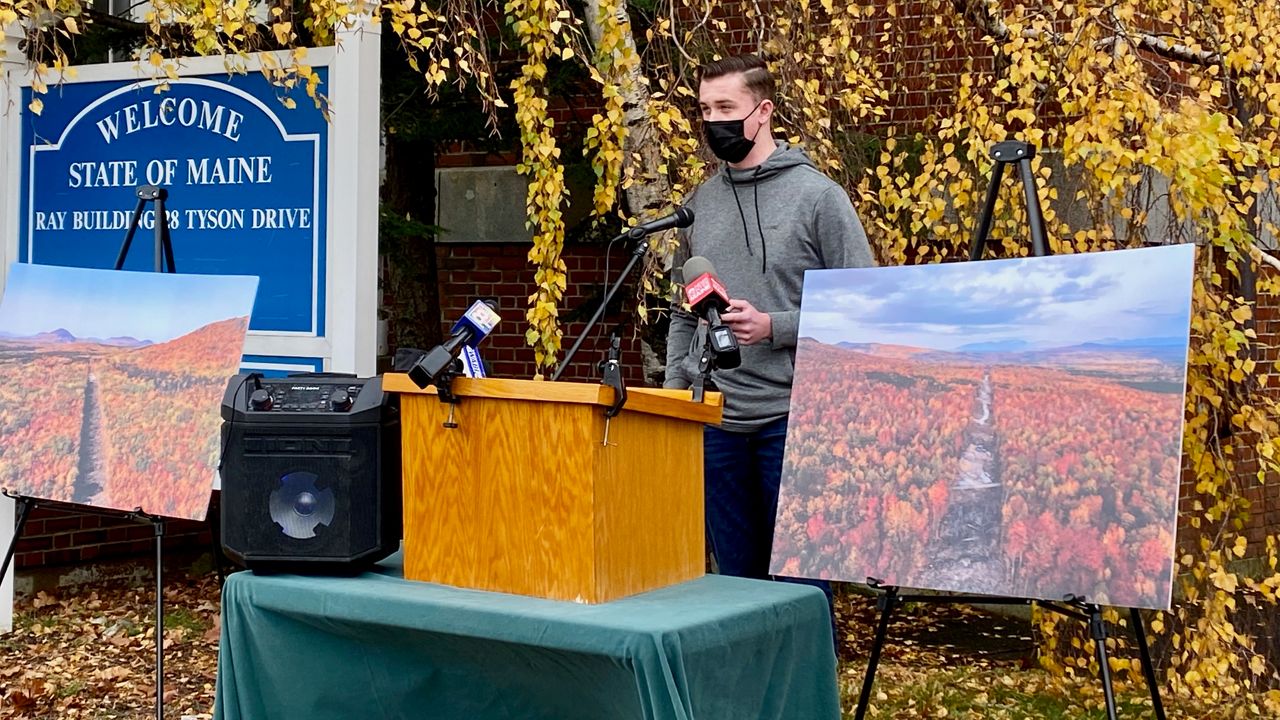 Cole Cochrane of Maine Youth for Climate Justice calls on the state to suspend permits for the Central Maine Power corridor project in light of a citizen vote to reject it. (Photo by Susan Cover of Spectrum News Maine)

In October, the department held a hearing on the project following a court decision in which a judge ruled that neither Gov. Janet Mills nor her predecessor Gov. Paul LePage had the power to lease the public land CMP needs for the project.

The day after the election, CMP parent company Avangrid filed a lawsuit to void the new law, calling it unconstitutional. Spending on the ballot question set a new state record, with more than $90 million spent by both sides.

The project dates back to 2017, when the company announced its intention to build a new 145-mile transmission line from western Maine to serve customers in Massachusetts.

At the rally, Cole Cochrane of Maine Youth for Climate Justice, said the vote sent a clear message of opposition to the project.

“Even when the vast majority of Mainers agree that this corridor will not continue on, CMP ignores us,” he said. “From a youth perspective, this puts little faith into the integrity of our democracy and shows that big corporations like CMP can get away with what they do if they have the money to.”